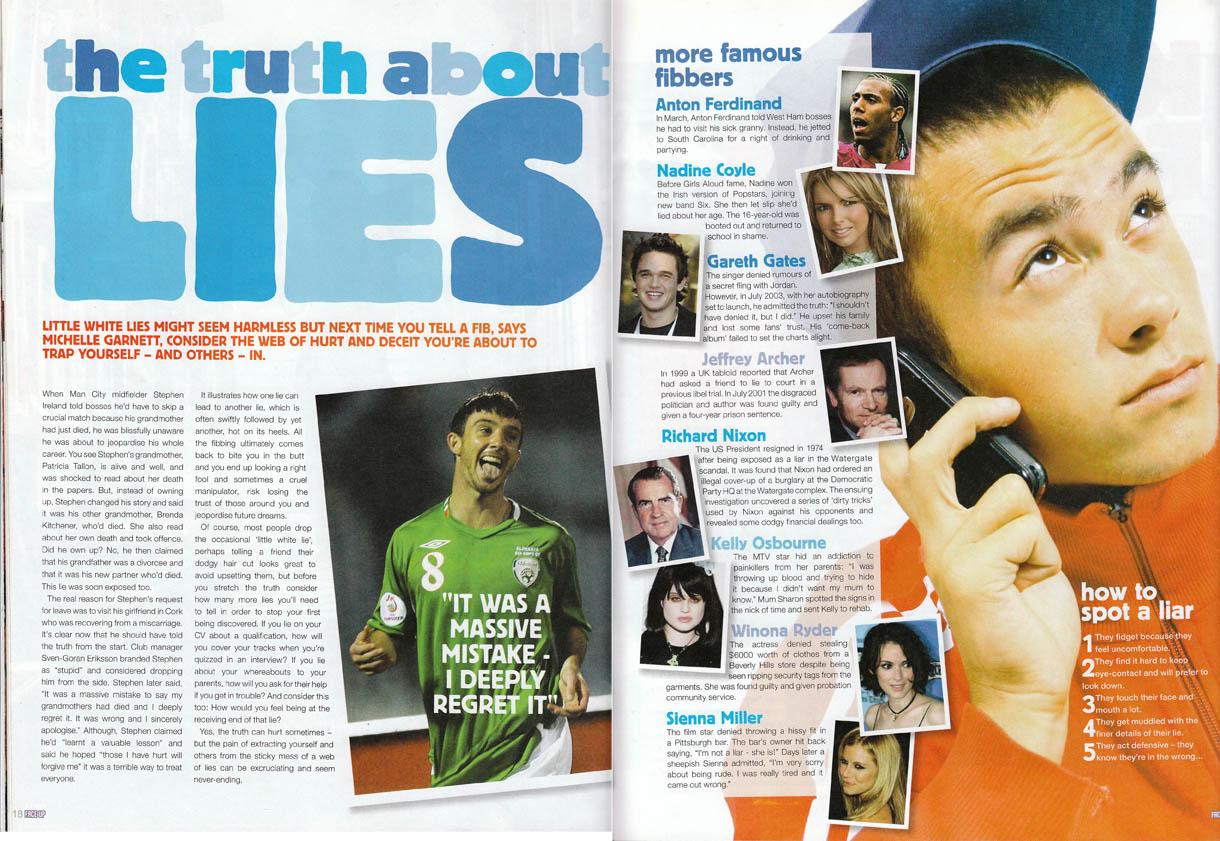 I was asked to produce a feature on the back of the intricate web of lies once spun by Man City player Stephen Ireland when he decided to skip a key match. Other famous fibbers were hauled before the dock in my article and tips on how to spot a liar provided a little added extra.

[head] The truth about lies

[Sell] Little white lies might seem harmless but next time you tell a fib, says Michelle Garnett, consider the web of hurt and deceit you’re about to trap yourself – and others – in.

When Man City midfielder Stephen Ireland told bosses he’d have to skip a crucial match because his grandmother had just died, he was blissfully unaware he was about to jeopardise his whole career. You see Stephen’s grandmother, Patricia Tallon, is alive and well, and was shocked to read about her death in the papers. But, instead of owning up, Stephen changed his story and said it was his other grandmother, Brenda Kitchener, who’d died. She also read about her own death and took offence. Did he own up? No, he then claimed that his grandfather was a divorcee and that it was his new partner who’d died. This lie was soon exposed too.

The real reason for Stephen’s request for leave was to visit his girlfriend in Cork who was recovering from a miscarriage. It’s clear now that he should have told the truth from the start. Club manager Sven-Goran Eriksson branded Stephen as “stupid” and considered dropping him from the side. Stephen later said, “It was a massive mistake to say my grandmothers had died and I deeply regret it. It was wrong and I sincerely apologise.” Although, Stephen claimed he’d “learnt a valuable lesson” and said he hoped “those I have hurt will forgive me” it was a terrible way to treat everyone.

It illustrates how one lie, can lead to another lie, which is often swiftly followed by yet another, hot on its heels. All the fibbing ultimately comes back to bite you in the butt and you end up looking a right fool and sometimes a cruel manipulator, risk losing the trust of those around you and jeopordise future dreams.

Of course most people drop the occasional ‘little white lie’, perhaps telling a friend their dodgy hair cut looks great to avoid upsetting them, but before you stretch the truth consider how many more lies you’ll need to tell in order to stop your first being discovered. If you lie on your CV about a qualification, how will you cover your tracks when you’re quizzed in an interview? If you lie about your whereabouts to your parents, how will you ask for their help if you get in trouble? And consider this too: How would you feel being at the receiving end of that lie?

Yes, the truth can hurt sometimes – but the pain of extracting yourself and others from the sticky mess of a web of lies can be excruciating and seem never-ending.

How to spot a liar

1. They fidget because they feel uncomfortable.

2. They find it hard to keep eye-contact and will prefer to look down.

3. They touch their face and mouth a lot.

4. They get muddled with the finer details of their lie.

5. They act defensive – they know they’re in the wrong…

• Anton Ferdinand: In March, Anton Ferdinand told West Ham bosses he had to visit his sick granny. Instead, he jetted to South Carolina for a night of drinking and partying.

• Nadine Coyle: Before Girls Aloud fame, Nadine won the Irish version of Popstars, joining new band Six. She then let slip she’d lied about her age. The 16-year-old was booted out and returned to school in shame.

• Gareth Gates: The singer denied rumours of a secret fling with Jordan but, in July 2003, with her autobiography set to launch, he admitted the truth: “I shouldn’t have denied it, but I did”. His ‘come-back album’ failed to set the charts alight.

• Jeffrey Archer: In 1999 a UK tabloid reported that Archer had asked a friend to lie to court in a previous libel trial. In July 2001 the disgraced politician and author was found guilty and given a four-year prison sentence.

• Richard Nixon: The US President resigned in 1974 after being exposed as a liar in the Watergate scandal. It was found that Nixon had ordered an illegal cover-up of a burglary at the Party HQ at the Watergate Hotel. The ensuing court case uncovered a series of ‘dirty tricks’ used by Nixon against his opponents and revealed some dodgy financial dealings too.

• Kelly Osbourne: The MTV star hid an addiction to painkillers from her parents: “I was throwing up blood and trying to hide it because I didn’t want my mum to know”. Mum Sharon spotted the signs in the nick of time and sent Kelly to rehab.

• Sienna Miller: The film star denied throwing a hissy fit in a Pittsburgh bar. The bar’s owner hit back saying, “I’m not a liar – she is!” Days later a sheepish Sienna admitted, “I’m very sorry about being rude. I was really tired and it came out wrong.”