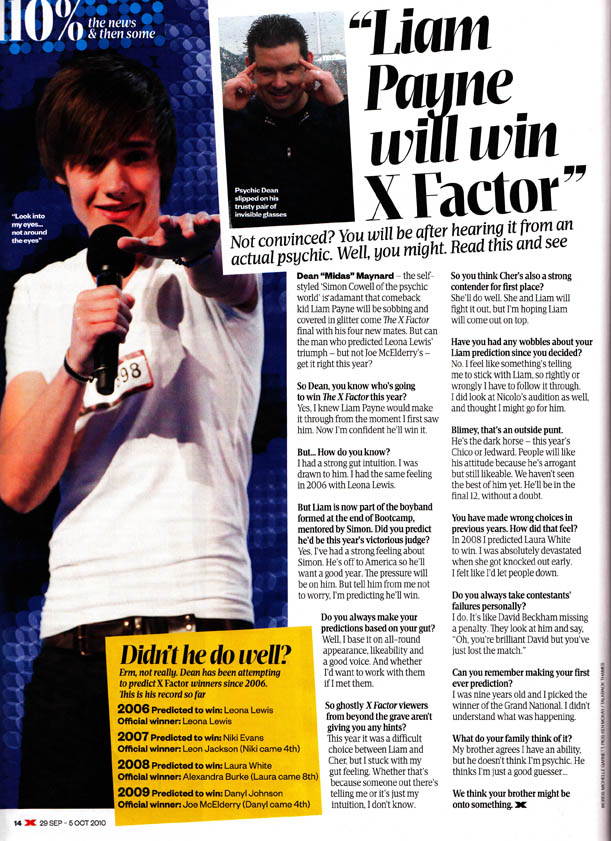 I interviewed celebrity psychic Dean ‘Midas’ Maynard and he predicted that Liam Payne would be the 2010 winner of The X Factor. Ok, so he didn’t predict that Liam would be lumped together with four other wannabes to make the boy band that is One Direction, but still… Apparently his brother thinks he’s just a good guesser. No comment.

[sell] Not convinced? You will be after hearing it from an actual psychic. Well, you might. Read this and see.

Dean ‘Midas’ Maynard – the self-styled Simon Cowell of the psychic world is adamant that comeback kid Liam Payne will be sobbing and covered in glitter come The X Factor final. But can the man who predicted Leona Lewis’ triumph get it right this year?

So Dean, you know who’s going to win X Factor this year?

“Yes, Liam Payne. I knew he’d make the top 3 from the moment I first saw him perform. Now I’m confident he’ll win it.”

How the jiggins do you know?

“I had a strong gut intuition. I was drawn to him. I had the same feeling in 2006 with Leona Lewis.”

Do you always make your predictions on that basis?

“Well, I base it on all-round appearance, likeability and a good voice too. And whether I’d want to work with them if I met them.”

Oh… but don’t ghostly X Factor viewers from beyond the grave give you any hints?

“Well, this year it was a difficult choice between Liam and Cher Lloyd, but I stuck with my gut feeling. Whether that’s because someone out there’s telling me what to think or it’s just my intuition, I don’t know.”

So you think Cher’s a strong contender for first place?

“She’ll do well. Her and Liam will fight it out, but I’m hoping Liam will come out on top.”

Have you had any wobbles about your ‘Liam’ prediction since you went public?

“No. I feel like something’s telling me to stick with Liam, so rightly or wrongly I have to follow it through. For a split second I looked at Nicolai’s audition and thought I might go for him.”

Blimey, that’s an outside punt.

“He’s the dark horse – this year’s Chico or Jedward. People will like his attitude cos he’s arrogant but still on the side of likeable. We haven’t seen the best of him yet. He’ll be a final 12 without a doubt.”

Liam’s now formed a group with four others. That puts him in Simon’s category now – did you predict he’d be this year’s jubliant judge?

“Yes I’ve had a strong feeling about Simon. He’s off to America so he’ll want a good year. The pressure will be on him. But tell him from me not to worry, cos I’m predicting he’ll win.”

But you have made a couple of duff choices in previous years. How did that feel?

“In 2008 I predicted Laura White to win. I was absolutely devastated when she got knocked out early on and I didn’t watch the show for a couple of weeks. I felt like I’d let people down.”

Do you take contestants’ failures personally?

“I do take it personally. It’s like David Beckham missing a penalty. They look at him and say, ‘Oh you’re brilliant David but you’ve just lost the match now.’”

Can you remember making your first ever prediction?

“I was 9 years old and I picked the winner of the Grand National. I didn’t understand what was happening.”

What do your family think of it?

“My brother agrees I have some kind of ability, but he doesn’t think I’m psychic. He thinks I’m just a good guesser…”

[sell] Erm not really. Dean has been predicting X Factor winners since 2006. This is his record so far.