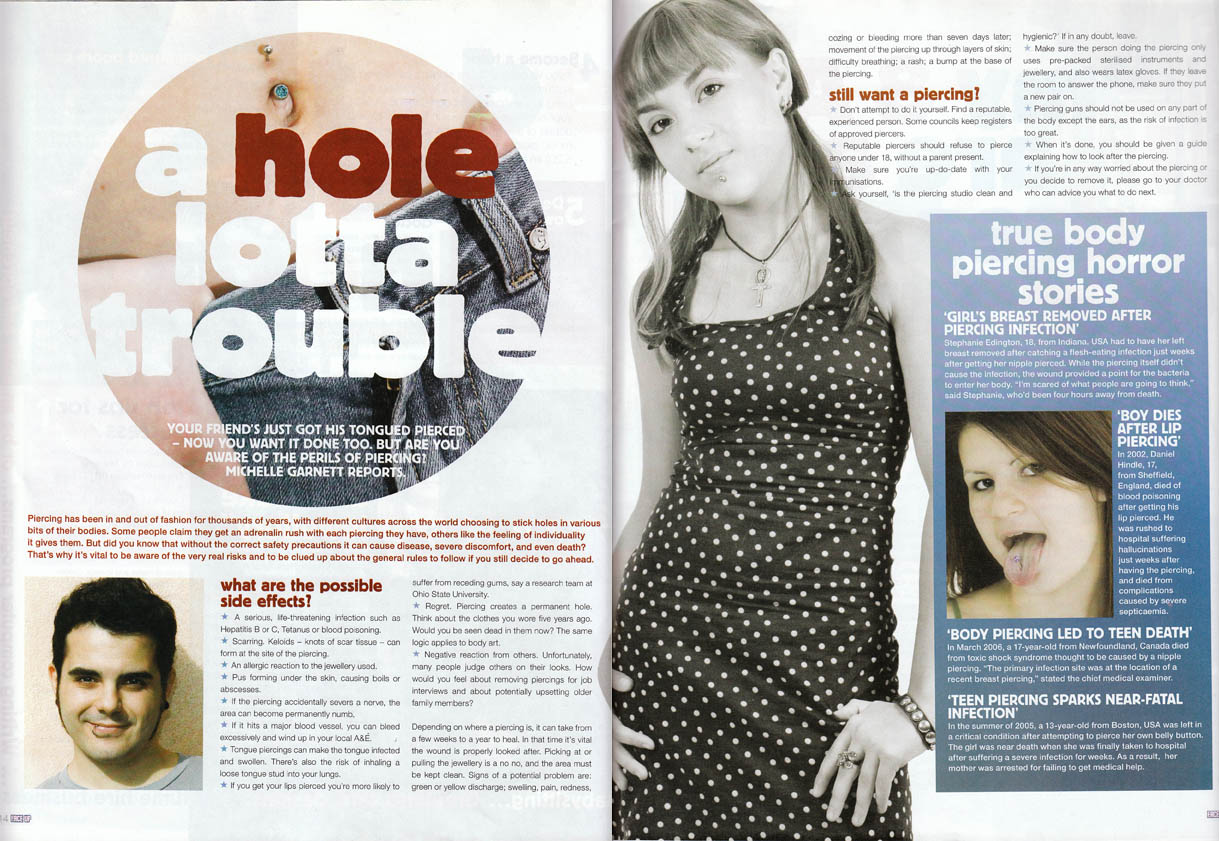 This feature was written for teen magazine Face Up and highlights the potential risks involved when you get your various body bits pierced. The aim was to be informative rather than judgemental, while the ‘true horror stories’ section added a touch of gritty drama.

[sell] Your mate’s just got his tongued pierced – now you want it doing too. But are you aware of the perils of piercing? Michelle Garnett reports.

Piercing has been in and out of fashion for thousands of years, with different cultures across the world choosing to stick holes in various bits of their bodies. Some people claim they get an adrenalin rush with each piercing they have, others like the feeling of individuality it gives them. But did you know that without the correct safety precautions it can cause disease, severe discomfort and even death? That’s why it’s vital to be aware of the very real risks and to be clued up about the general rules to follow if you still decide to go ahead.

[subhead] What are the possible side effects?

• A serious, life-threatening infection such as Hepatitis B or C, Tetanus or blood poisoning.

• Scarring. Keloids – knots of scar tissue – can form at the site of the piercing.

• An allergic reaction to the jewellery used.

• Pus forming under the skin, causing boils or abscesses.

• If the piercing accidentally severs a nerve, the area can become permanently numb.

• If it hits a major blood vessel you can bleed excessively and wind up in your local A&E.

• Tongue piercings can make the tongue infected and swollen. There’s also the risk of inhaling a loose tongue stud into your lungs.

• If you get your lips pierced you’re more likely to suffer from receding gums, say a research team at Ohio State University.

• Regret. Piercing creates a permanent hole. Think about the clothes you wore five years ago. Would you be seen dead in them now? The same logic applies to body art.

• Negative reaction from others. Unfortunately many people judge others on their looks. How would you feel about removing piercings for job interviews and about potentially upsetting older family members?

Depending on where a piercing is, it can take from a few weeks to a year to heal. In that time it’s vital the wound is properly looked after. Picking at or pulling the jewellery is a no no, and the area must be kept clean. Signs of a potential problem are: green or yellow discharge; swelling, pain, redness, oozing or bleeding more than seven days later; movement of the piercing up through layers of skin; difficulty breathing; a rash; a bump at the base of the piercing.

• Don’t attempt to do it yourself. Find a reputable, experienced person. Some councils keep registers of approved piercers.

• Reputable piercers should refuse to pierce anyone under 18, without a parent present. Any studio that breaks the rules is likely to break other rules too.

• Make sure you’re up-do-date with your immunisations.

• Ask yourself, ‘is the piercing studio clean and hygienic?’ If in doubt, leave.

• Make sure the person doing the piercing only uses pre-packed sterilised instruments and jewellery, and also wears latex gloves. If they leave the room to answer the phone, make sure they put a new pair on.

• Piercing guns should not be used on any part of the body except the ears, as the risk of infection is too great.

• When it’s done, you should be given a guide explaining how to look after the piercing.

• If you’re in any way worried about the piercing or you decide to remove it, please go to your doctor who can advice you what to do next.

• ‘Girl’s Breast Removed After Piercing Infection’:  Stephanie Edington, 18, from Indiana, USA had to have her left breast removed after catching a flesh-eating infection just weeks after getting her nipple pierced. While the piercing itself didn’t cause the infection, the wound provided a point for the bacteria to enter her body. “I’m scared of what people are going to think,” said Stephanie, who’d been four hours away from death.

• ‘Boy Dies After Lip Piercing’:  In December 2002, Daniel Hindle, 17, from Sheffield, England, died of blood poisoning after getting his lip pierced. He was rushed to hospital suffering hallucinations just weeks after having the piercing, and died from complications caused by severe septicaemia.

• ‘Body Piercing Led to Teen Death’:  In March 2006, a 17-year-old from Newfoundland, Canada died from toxic shock syndrome thought to be caused by a nipple piercing. “The primary infection site was at the location of a recent breast piercing,” stated the chief medical examiner.

• ‘Teen Piercing Sparks Near-Fatal Infection’:  In the summer of 2005, a 13-year-old from Boston, USA was left in a critical condition after attempting to pierce her own belly button. The girl was near death when she was finally taken to hospital after suffering a severe infection for weeks. As a result her mother was arrested for failing to get medical help.