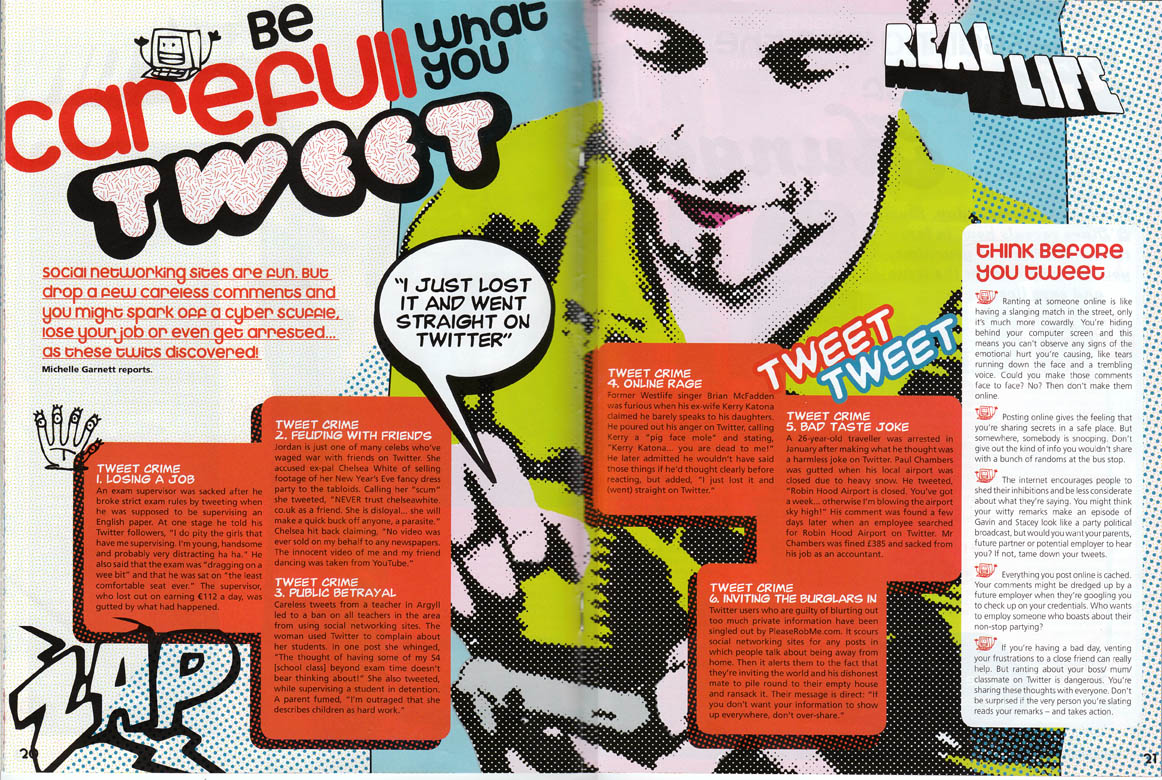 A feature highlighting the dangers of tweet crime. I picked out six incidents in which careless tweets have cost people their jobs, friendships and self-respect. Twits!

[sell] Social networking sites are fun. But drop a few careless comments and you might spark off a cyber scuffle, lose your job or even get arrested… as these twits discovered! Michelle Garnett reports.

An exam supervisor was sacked after he broke strict exam rules by tweeting when he was supposed to be supervising an English paper. At one stage he told his Twitter followers, “I do pity the girls that have me supervising. I’m young, handsome and probably very distracting ha ha.” He also said that the exam was “dragging on a wee bit” and that he was sat on “the least comfortable seat ever.” The supervisor, who lost out on earning €112 a day, was gutted by what had happened.

Jordan is just one of many celebs who’ve waged war with friends on Twitter. She accused ex-pal Chelsea White of selling footage of her New Year’s Eve fancy dress party to the tabloids. Calling her “scum” she tweeted, “NEVER trust chelseawhite.co.uk as a friend. She is disloyal… she will make a quick buck off anyone, a parasite.” Chelsea hit back claiming, “No video was ever sold on my behalf to any newspapers. The innocent video of me and my friend dancing was taken from YouTube.”

Careless tweets from a teacher in Argyll led to a ban on all teachers in the area from using social networking sites. The woman used Twitter to complain about her students. In one post she whinged, “The thought of having some of my S4 [school class] beyond exam time doesn’t bear thinking about!” She also tweeted, while supervising a student in detention. A parent fumed, “I’m outraged that she describes children as hard work.”

Former Westlife singer Brian McFadden was furious when his ex-wife Kerry Katona claimed he barely speaks to his daughters. He poured out his anger on Twitter, calling Kerry a “pig face mole” and stating, “Kerry Katona… you are dead to me!” He later admitted he wouldn’t have said those things if he’d thought clearly before reacting, but added, “I just lost it and (went) straight on Twitter.”

A 26-year-old traveller was arrested in January after making what he thought was a harmless joke on Twitter. Paul Chambers was gutted when his local airport was closed due to heavy snow. He tweeted, “Robin Hood Airport is closed. You’ve got a week… otherwise I’m blowing the airport sky high!” His comment was found a few days later when an employee searched for Robin Hood Airport on Twitter. Mr Chambers was fined £385 and sacked from his job as an accountant.

Twitter users who are guilty of blurting out too much private information have been singled out by PleaseRobMe.com. It scours social networking sites for any posts in which people talk about being away from home. Then it alerts them to the fact that they’re inviting the world and his dishonest mate to pile round to their empty house and ransack it. Their message is direct: “If you don’t want your information to show up everywhere, don’t over-share.”

• Ranting at someone online is like having a slanging match in the street, only it’s much more cowardly. You’re hiding behind your computer screen and this means you can’t observe any signs of the emotional hurt you’re causing, like tears running down the face and a trembling voice. Could you make those comments face to face? No? Then don’t make them online.

• Posting online gives the feeling that you’re sharing secrets in a safe place. But somewhere, somebody is snooping. Don’t give out the kind of info you wouldn’t share with a bunch of randoms at the bus stop.

• The internet encourages people to shed their inhibitions and be less considerate about what they’re saying. You might think your witty remarks make an episode of Gavin and Stacey look like a party political broadcast, but would you want your parents, future partner or potential employer to hear you? If not, tame down your tweets.

• Everything you post online is cached. Your comments might be dredged up by a future employer when they’re googling you to check up on your credentials. Who wants to employ someone who boasts about their non-stop partying?

• If you’re having a bad day, venting your frustrations to a close friend can really help. But ranting about your boss/ mum/ classmate on Twitter is dangerous. You’re sharing these thoughts with everyone. Don’t be surprised if the very person you’re slating reads your remarks – and takes action.