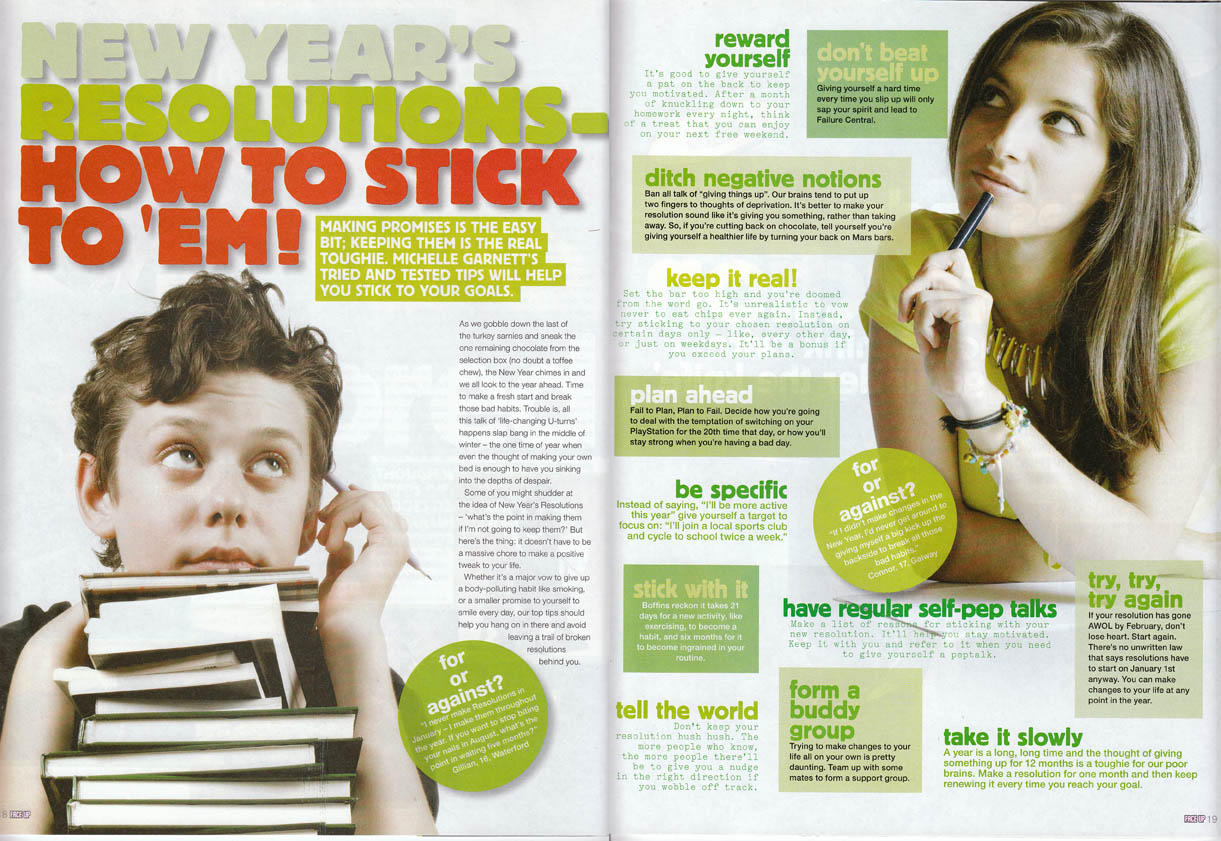 If you don’t have an App on your phone which helps you hang on in there with your New Year’s Resolutions, then these tips should keep you on track. I wrote this feature for the teen readers of a monthly magazine called Face Up. Hopefully it gave them a dose of encouragement to stick to their goals – however ambitious they might have been (excluding resolutions to do a duet with Gaga/be the next 007/marry Prince Harry… sorry Chelsy).

[head] New Year’s Resolutions – how to stick to ’em!

[sell] Making promises is the easy bit; keeping them is the real toughie. Michelle Garnett’s tried and tested tips will help you stick to your goals.

As we gobble down the last of the turkey sarnies and sneak the one remaining chocolate from the selection box (no doubt a toffee chew), the New Year chimes in and we all look to the year ahead. Time to make a fresh start and break those bad habits. Trouble is, all this talk of ‘life-changing U-turns’ happens slap bang in the middle of winter – the one time of year when even the thought of making your own bed is enough to have you sinking into the depths of despair.

Some of you might shudder at the idea of New Year’s Resolutions – ‘what’s the point in making them if I’m not going to keep them?’ But here’s the thing: it doesn’t have to be a massive chore to make a positive tweak to your life.

Whether it’s a major vow to give up a body-polluting habit like smoking, or a smaller promise to yourself to smile every day, our top tips should help you hang on in there and avoid leaving a trail of broken resolutions behind you.

Set the bar too high and you’re doomed from the word go. It’s unrealistic to vow never to eat chips ever again. Instead, try sticking to your chosen resolution on certain days only – like, every other day, or just on weekdays. It’ll be a bonus if you exceed your plans.

Instead of saying, “I’ll be more active this year” give yourself a target to focus on: “I’ll join a local sports club and cycle to school twice a week.”

Ban all talk of “giving things up”. Our brains tend to put up two fingers to thoughts of deprivation. It’s better to make your resolution sound like it’s giving you something, rather than taking away. So, if you’re cutting back on chocolate, tell yourself you’re giving yourself a healthier life by turning your back on Mars bars.

Fail to Plan, Plan to Fail. Decide how you’re going to deal with the temptation of switching on your PlayStation for the 20th time that day, or how you’ll stay strong when you’re having a bad day.

Make a list of reasons for sticking with your new resolution. It’ll help you stay motivated. Keep it with you and refer to it when you need to give yourself a pep talk.

Don’t keep your resolution hush hush. The more people who know, the more people there’ll be to give you a nudge in the right direction if you wobble off track.

Trying to make changes to your life all on your own is pretty daunting. Team up with some mates to form a support group.

It’s good to give yourself a pat on the back to keep you motivated. After a month of knuckling down to your homework every night, think of a treat that you can enjoy on your next free weekend.

[subhead] Don’t beat yourself up

Giving yourself a hard time every time you slip up will only sap your spirit and lead to Failure Central.

[subhead] Stick with it

Boffins reckon it takes 21 days for a new activity, like exercising, to become a habit, and six months for it to become ingrained in your routine.

A year is a long, long time and the thought of giving something up for 12 months is a toughie for our poor brains. Make a resolution for one month and then keep renewing it every time you reach your goal.

If your resolution has gone AWOL by February, don’t lose heart. Start again. There’s no unwritten law that says resolutions have to start on January 1st anyway. You can make changes to your life at any point in the year.

[head] For or Against?

“I never make Resolutions in January – I make them throughout the year. If you want to stop biting your nails in August, what’s the point in waiting five months?”

[head] For or Against?

“If I didn’t make changes in the New Year, I’d never get around to giving myself a big kick up the backside to break all those bad habits.”