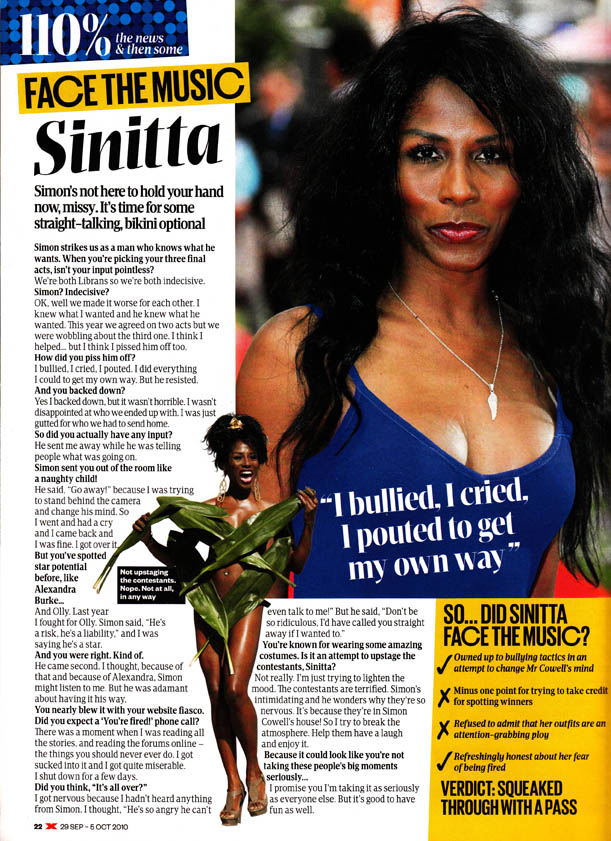 Simon Cowell’s X Factor Girl Friday, Sinitta, was forced to face the music when I grilled her for the show’s spin-off publication, X Magazine. When referring to how she attempted to influence Si’s decision on which bands to put through to the final 12, she told me, “I bullied, I cried and I pouted to get my own way…” A diva, yes, but an endearing one.

Simon strikes us as a man who knows what he wants. When you’re picking your 3 final acts, isn’t your input pointless?

“We’re both Librans so we’re both indecisive.”

“Ok, well we made it worse for each other. I knew what I wanted and he knew what he wanted. This year we agreed on two acts but we were wobbling about the third one. I think I helped… but I think I pissed him off too.”

How did you piss him off?

“I bullied, I cried, I pouted. I did everything I could to get my own way. But he resisted.”

And you backed down?

“Yes I backed down but it wasn’t a horrible back down. I wasn’t disappointed for who we ended up with. I was just gutted for who we had to send home.”

So did you actually have any input?

“He sent me away while he was telling people what was going on.”

So Simon sent you out the room like a naughty child?

“He said ‘go away!’ because I was trying to stand behind the camera and change his mind. So I went and had a cry and I came back and I was fine. I got over it.”

But you’ve spotted star potential before in Alexandra Burke…

“And Olly. Last year I fought for Olly. Simon said he’s a risk, he’s a liability and I was saying he’s a star.”

And you were right. Kind of.

“He came second. I thought because of that and because of Alexandra, Simon will listen to me. But he was adamant about having it his way.”

You nearly blew it with your website fiasco. Were you waiting for a ‘You’re fired!’ phone call?

“There was a moment when I was reading all the stories, and reading the forums online – the things you should never ever do. I got sucked into it and I got quite miserable. I shut down for a few days.”

Did you think it’s all over?

“I got nervous because I hadn’t heard anything from Simon. I thought, ‘He’s so angry he can’t even talk to me!’ But he said, ‘Don’t be so ridiculous, I’d have called you straight away if I wanted to.’”

You’re known for wearing some amazing costumes. Is it an attempt to upstage the contestants, Sinitta?

“Not really. I’m just trying to lighten the mood. The contestants are terrified. Simon’s all intimidating and he wonders why they’re so nervous. It’s because they’re in Simon Cowell’s house! So I try to break the atmosphere. Make them have a laugh and enjoy it.”

Because it could look like you’re not taking these people’s big moments seriously.

“I promise you I’m taking it as serious as everyone else! But it’s good to have fun as well.”

So… did Sinitta face the music?

[tick] Owned up to bullying tactics in attempt to change Mr Cowell’s mind.

[cross] Minus one point for trying to take credit for spotting winners.

[tick] Refreshingly honest about her fear of being fired.

VERDICT: Squeaked through with a pass