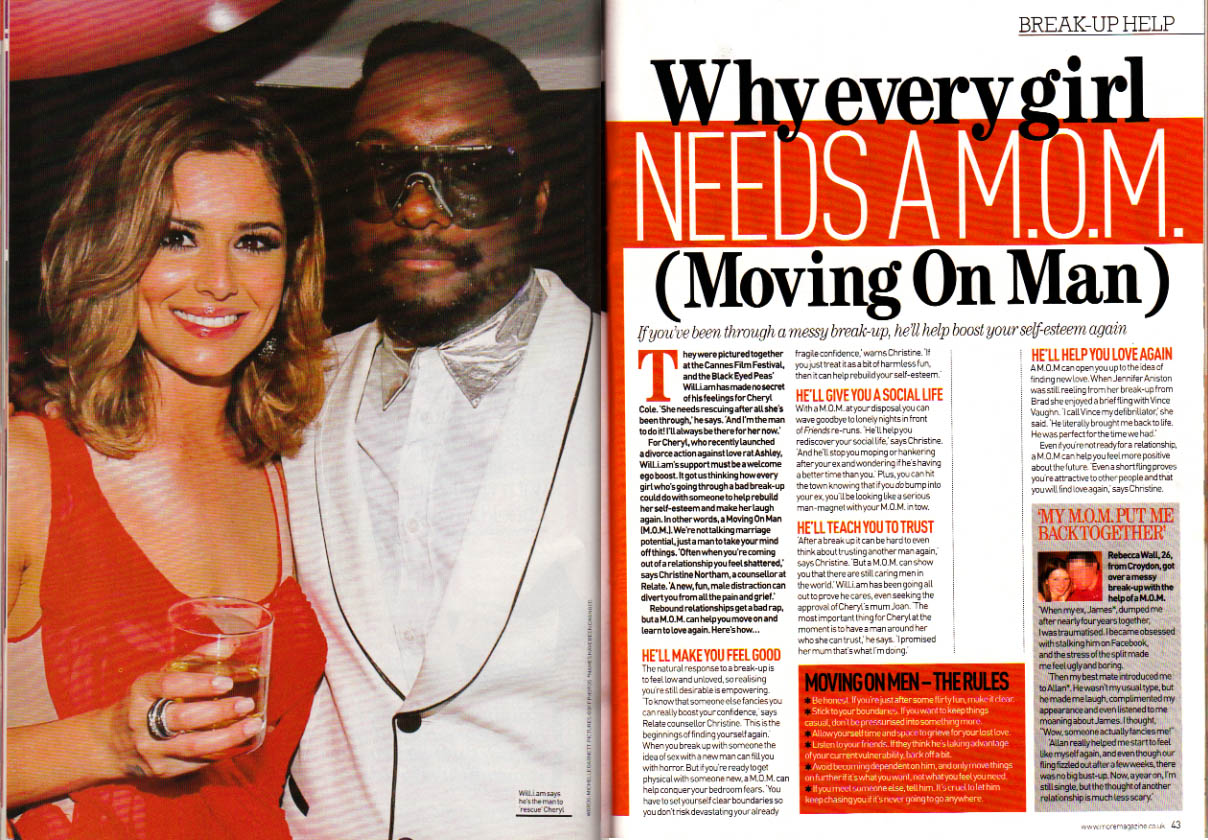 Ever heard of a M.O.M? It’s a Moving On Man, and he’s an essential element in any girl’s break up recovery. I wrote this feature for more! magazine and hooked it on Cheryl Cole’s close friendship with Will.I.Am following her split from Ashley.

[head] Why Every Girl Needs a M.O.M. (Moving On Man)
[sell] The break up of a relationship can leave you feeling emotionally battered and bruised. Who better to nurse your self-esteem back to health than an attentive man who thinks you’re beyond gorgeous.

When Black Eyed Peas frontman Will.I.Am declared that Ashley Cole was stupid to cheat on Cheryl, it was clear to everyone that he’s one smitten kitten! “She needs rescuing after all she’s been through,” he said, adding, “and I’m the man to do it! I’ll always be there for her now… no excuses.”

For Cheryl, who must be feeling pretty fragile after Ashley’s very public betrayal, her besotted buddy’s heroic words of support are undoubtedly proving the perfect pick-me up. It got us thinking how every girl who’s going though a traumatic break up could do with a guy like Will.I.Am to rescue her. Someone who’ll help re-build her self-esteem and make her laugh again. A guy who can ease her back into the single life. In other words, a Moving On Man (or M.O.M. for short).

Even if it’s just a flirty friendship, the attention from a new man can work wonders. “Often when you’re coming out of a relationship you’re feeling shattered, wondering how you’ll ever cope again,” says Christine Northam, a counsellor working for Relate. “A new relationship can divert you from all the the pain and grief you’re experiencing.”

Too often, love on the rebound gets a rotten write up, but don’t dismiss the merits of a M.O.M. Here’s how he can help exorcise the painful memories of your ex and give your break up blues the boot:

1. He’ll boost your self-esteem
The natural emotional response to a break up is to feel low and unloved, so to discover you’re still desirable is empowering stuff. “To know that someone else fancies you can really boost your confidence,” says Christine. “During your previous relationship you’ve been known as somebody’s partner, so this is the beginnings of finding yourself again.” For Cheryl, it’s Will.I.Am who’s ramping up her inner feel good factor. “She’s a real good girl,” he says. “To get a girl that’s hot who knows how to conduct herself is a rare thing.”

2. He’ll help you live your life
With a M.O.M. at your disposal you can wave goodbye to lonely nights sat in front of Desperate Housewives ploughing through gallons of Ben & Jerry’s. “He’ll help you re-engage with the social side of you,” says Christine. No more moping in isolation, hankering after your ex and wondering if he’s having a better time than you. You can hit the town with confidence – and if you do bump into him with your M.O.M. in tow, you’ll be looking like a serious man-magnet.

3. He’ll ease you back into single life
A M.O.M. acts like a love-life lubricant! Rather than go cold turkey and launch yourself on the dating market it gives you the chance to slide back smoothly into the role of a single woman. Fearne Cotton readily admits that her brief fling with fellow presenter Steve Jones “was a sort of break up relationship” that helped her move on from her ex, Jesse James.

4. He’ll re-build your trust in men
After a break up it can be hard to even think about trusting another guy. But a M.O.M.’s loyal support can provide you with the proof that caring men aren’t extinct! Will.I.Am has been going all out to notch up the Brownie points, even seeking the approval of Cheryl’s mum Joan. “The most important thing for Cheryl at the moment is to have a man around her who she can trust,” he says. “I promised her mum that’s what I’m doing.”

5. He’ll teach you to love again
When Jennifer Aniston was still reeling from her break up from Brad she enjoyed a brief fling with her co-star Vince Vaughn. She credits Vince for jump-starting her heart – and opening her up to the possibilities of future romance. “I call Vince my defibrillator,” she says. “He literally brought me back to life… He was perfect for the time we had together.” Christine agrees that a M.O.M. can give you hope: “It proves you’re attractive to other people and you can love again.”

6. He’ll make you less anxious about sex
When you break up with someone the idea of sex with a new man can fill you with horror, especially if it’s with a guy who might just be The One. But if you’re ready to embark on something more physical this is where a M.O.M. comes in handy. “You have to set yourself clear boundaries so you don’t risk devastating your already fragile confidence,” warns Christine. “But if you can say, ‘This is just a stepping stone back into normal life’, then it can be quite useful.” And even though you might feel a bit deflated when things fizzle out with your M.O.M., it can arm you with the knowledge that you’re ready to date again.

– So lap up the attention your M.O.M. lavishes on you, let him be the sticking plaster to your broken heart and learn to love again!

[additional box out]
[head] Your Moving On Man – the golden rules
OR How to handle your M.O.M. with care
• Be honest about your intentions. If you’re just after some flirty fun, make it clear.
• Stick to your boundaries. If you want to keep it light and fluffy don’t be pressurised into something more.
• Allow yourself time and space to grieve for your lost love – and be discreet when divulging the gory details to your M.O.M.
• Listen to your friends. If they think he’s taking advantage of your current vulnerability, back off a bit.
• Avoid becoming dependent on him, and only move things on further if it’s what you want, not what you feel you need.
• If you meet someone else, tell him. It’s too cruel to keep him trotting at your heels like a love-sick puppy.
[ends]

[STARTS: Case study for Moving On Man]
26-year-old Rebecca Wall, from Croydon, got over a messy break up with her ex with the help of her very own M.O.M.

“When I was dumped by my ex, James, I was totally traumatised. We’d been together for nearly four years but it had ended badly. A mate said they’d seen him with another girl. He denied it and although I didn’t have any proof, I got really paranoid. It triggered off loads of fights until one day he told me it was over.

“After that I got massively depressed and became obsessed with tracking down his every move on Facebook. All the stress made me feel tired and I felt ugly and boring.

“Then a month later my best mate introduced me to a guy called Adam. He was totally not my type – he had longish hair – but he made me laugh and we kept discovering all these bizarre coincidences, like, we both went to the same playgroup when we were kids!

“The next time I saw him he zoomed in on me and paid me loads of attention, telling me I looked good. He even listened to me moaning about my ex. I was like, ‘Wow, someone actually fancies me!’

“I thought I’d forgotten how to flirt but it came back to me pretty quick. We had a bit of kiss which kick started things and for the next few weeks we hung out together. It felt more like a holiday romance than a serious thing but he pieced me back together bit by bit until I felt more like my old self again.

“My fling with Adam eventually fizzled out but there was no big bust up and no tears. It took a while to stop feeling angry towards my ex, but I saw him quite recently and it was fine. Now, a year on, I’m still single but the thought of another relationship isn’t so scary.”