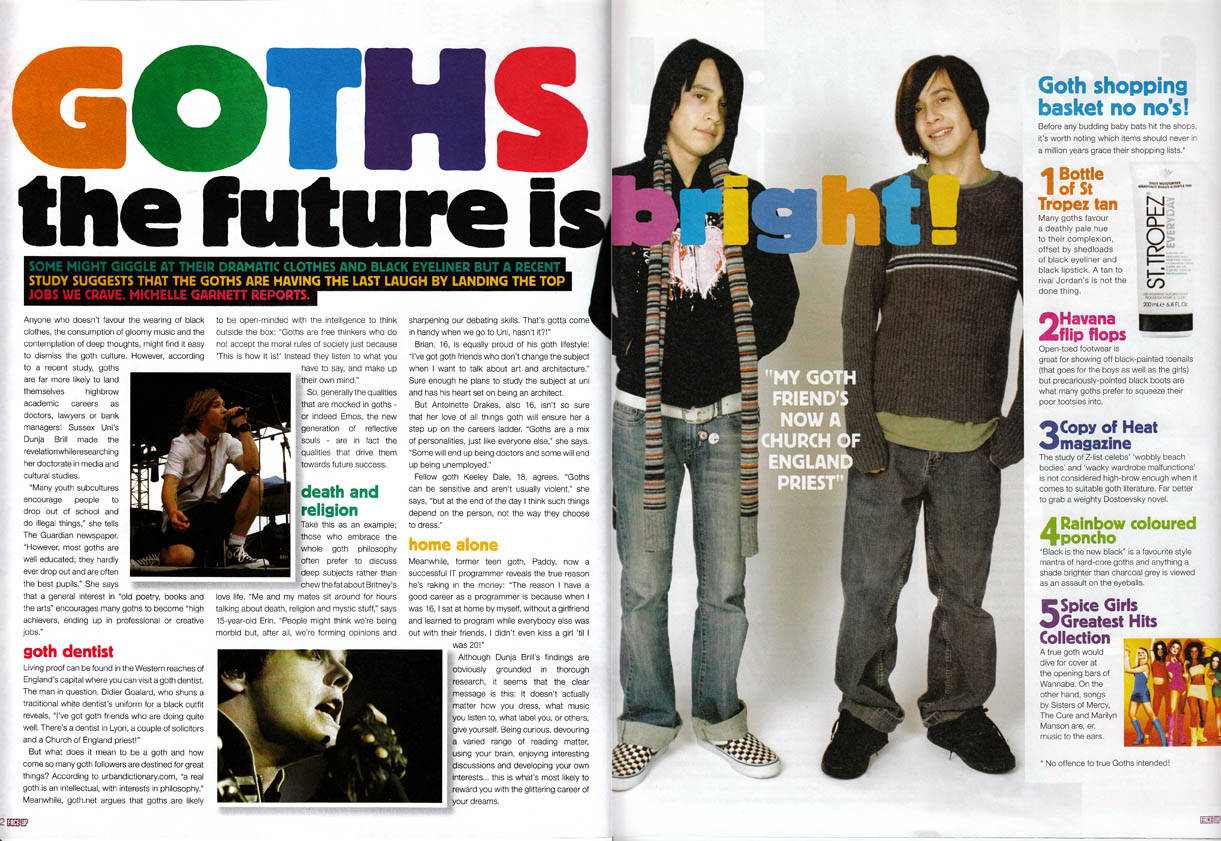 Strip away the pale make up and black, floor-skimming coats and you’ll more than likely discover individuals with middle-class aspirations and good job prospects. Well that’s according to a report by a student at Sussex Uni… I reported on the issue in this feature, chucking in some tongue-in-cheek rules for the Baby Bats amongst us.

[head] Goths the future is bright!

[sell] Some might giggle at their dramatic clothes and black eyeliner but a recent study suggests that the goths are having the last laugh by landing the top jobs we crave. Michelle Garnett reports.

Anyone who doesn’t favour the wearing of black clothes, the consumption of gloomy music and the contemplation of deep thoughts, might find it easy to dismiss the goth culture. However, according to a recent study, goths are far more likely to land themselves highbrow academic careers as doctors, lawyers or bank managers! Sussex Uni’s Dunja Brill made the revelation while researching her doctorate in media and cultural studies.

“Many youth subcultures encourage people to drop out of school and do illegal things,” she tells The Guardian newspaper. “However, most goths are well educated; they hardly ever drop out and are often the best pupils.” She says that a general interest in “old poetry, books and the arts”, encourages many goths to become “high achievers, ending up in professional or creative jobs”

Living proof can be found in the Western reaches of England’s capital where you can visit a goth dentist. The man in question, Didier Goalard, who shuns a traditional white dentist’s uniform for a black outfit reveals, “I’ve got goth friends who are doing quite well. There’s a dentist in Lyon, a couple of solicitors and a Church of England priest!”

But what does it mean to be a goth and how come so many goth followers are destined for great things? According to urbandictionary.com, “a real goth is an intellectual, with interests in philosophy.” Meanwhile, goth.net argues that goths are likely to be open-minded with the intelligence to think outside the box: “Goths are free thinkers who do not accept the moral rules of society just because ‘This is how it is!’ Instead they listen to what you have to say, and make up their own mind.”

Take this as an example; those who embrace the whole goth philosophy often prefer to discuss deep subjects rather than chew the fat about Britney’s love life. “Me and my mates sit around for hours talking about death, religion and mystic stuff,” says 15-year-old Erin. “People might think we’re being morbid but, after all, we’re forming opinions and sharpening our debating skills. That’s gotta come in handy when we go to Uni hasn’t it?!”

Brian, 16, is equally proud of his goth lifestyle: “I’ve got goth friends who don’t change the subject when I want to talk about art and architecture.” Sure enough he plans to study the subject at uni and has his heart set on being an architect.

But Antoinette Drakes, also 16, isn’t so sure that her love of all things goth will ensure her a step up on the careers ladder. “Goths are a mix of personalities, just like everyone else,” she says. “Some will end up being doctors and some will end up being unemployed.”

Fellow goth Keeley Dale, 18, agrees. “Goths can be sensitive and aren’t usually violent,” she says, “but at the end of the day I think such things depend on the person, not the way they choose to dress.”

Meanwhile, former teen goth, Paddy, now a successful IT programmer reveals the true reason he’s raking in the money: “The reason I have a good career as a programmer is because when I was 16, I sat at home by myself, without a girlfriend and learned to program while everybody else was out with their friends. I didn’t even kiss a girl ’til I was 20!”

Although Dunja Brill’s findings are obviously grounded in thorough research it seems that the clear message is this: It doesn’t actually matter how you dress, what music you listen to, what label you, or others, give yourself. Being curious, devouring a varied range of reading matter, using your brain, enjoying interesting discussions and developing your own interests… this is what’s most likely to reward you with the glittering career of your dreams.

Before any budding baby bats hit the shops it’s worth noting which items should never in a million years grace their shopping lists.*

1. Bottle of St Tropez tan: Many goths favour a deathly pale hue to their complexion, offset by shedloads of black eyeliner and black lipstick. A tan to rival Jordan’s is not the done thing.

2. Havana flip flops: Open-toed footwear is great for showing off black-painted toenails (that goes for the boys as well as the girls) precariously-pointed black boots are what many goths prefer to squeeze their poor tootsies into.

3. Copy of Heat magazine: The study of Z-list celebs’ ‘wobbly beach bodies’ and ‘wacky wardrobe malfunctions’ is not considered high-brow enough when it comes to suitable goth literature. Far better to grab a weighty Dostoevsky novel.

4. Rainbow coloured poncho: “Black is the new black” is a favourite style mantra of hard-core goths and anything a shade brighter than charcoal grey is viewed as an assault on the eyeballs.

5. Spice Girls Greatest Hits Collection: A true goth would dive for cover at the opening bars of Wannabe. On the other hand, songs by Sisters of Mercy, The Cure and Marilyn Manson are, er, music to the ears.

* No offence to true Goths intended!