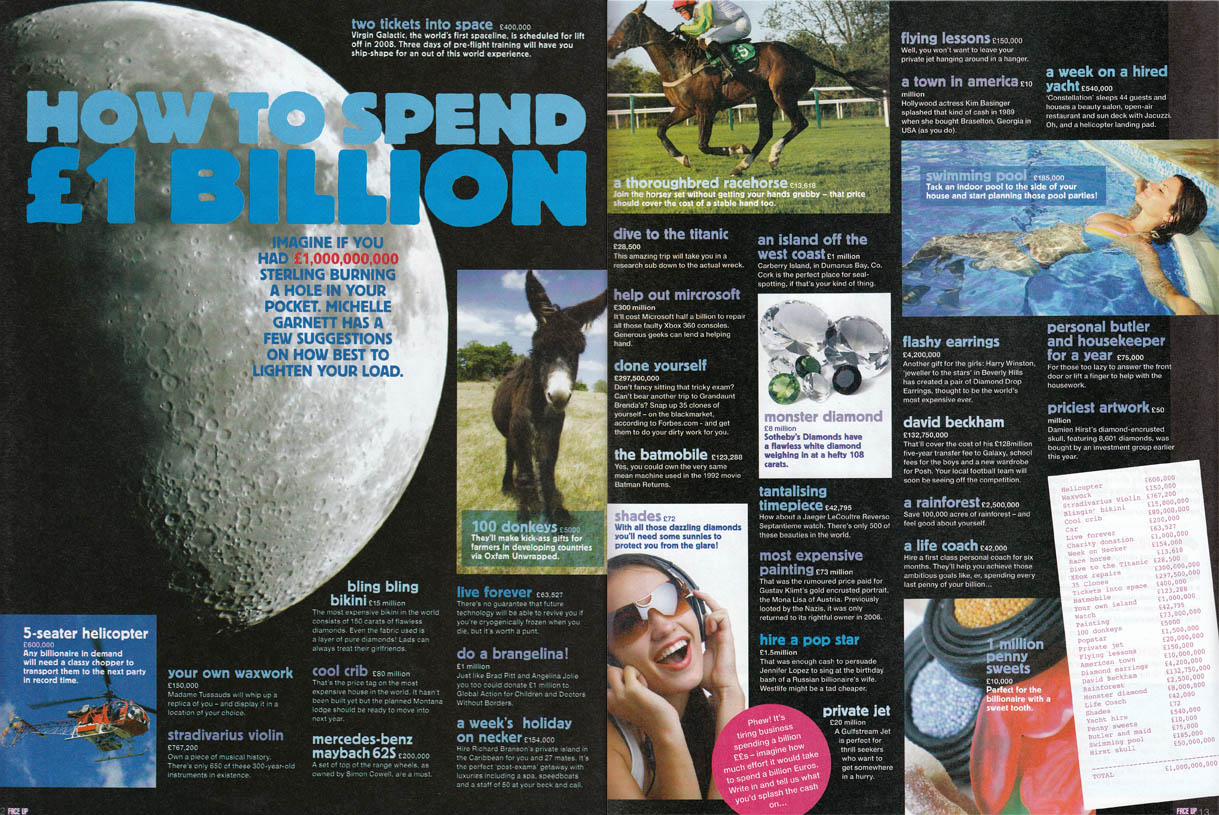 I enjoyed researching and writing this feature for Face Up. And in case you ever have a spare billion pounds kicking around, read on to discover how you can dispose of it (of course you can always donate it to me…)

[head] How to spend a billion

[sell] Imagine if you had £1,000,000,000 burning a hole in your pocket. Michelle Garnett has a few suggestions on how best to lighten your load.

• 5-seater helicopter  £600,000  —  Any billionaire in demand will need a classy chopper to transport them to the next party in record time.

• Bling bling bikini  £15 million  —  The most expensive bikini in the world consists of 150 carats of flawless diamonds. Even the fabric used is a layer of pure diamonds! Lads can always treat their girlfriends.

• Cool crib  £80 million  —  That’s the price tag on the most expensive house in world. It hasn’t been built yet but the planned Montana lodge should be ready to move into next year.

• Live forever  £63,527  —  There’s no guarantee that future technology will be able to revive you if you’re cryogenically frozen when you die, but it’s worth a punt.

• Do a Brangelina!  £1 million  —  Just like Brad Pitt and Angelina Jolie you too could donate £1 million to Global Action for Children and Doctors Without Borders.

• A week’s holiday on Necker  £154,000  —  Hire Richard Branson’s private island in the Caribbean for you and 27 mates. It’s the perfect ‘post-exams’ getaway with luxuries including a spa, speedboats and a staff of 50 at your beck and call.

• A thoroughbred racehorse  £13,618  —  Join the horsey set without getting your hands grubby – that price should cover the cost of a stable hand too.

• Help out Mircrosoft  £300 million  —  It’ll cost Microsoft half a billion to repair all those faulty Xbox 360 consoles. Generous geeks can lend a helping hand.

• Clone yourself  £297,500,000  —  Don’t fancy sitting that tricky exam? Can’t bear another trip to Great Aunt Brenda’s? Snap up 35 clones of yourself – on the blackmarket, according to Forbes.com – and get them to do your dirty work for you.

• Two tickets into space  £400,000  —  Virgin Galactic, the world’s first spaceline, is scheduled for lift off in 2008. Three days of pre-flight training will have you ship-shape for an out of this world experience

• An island off Ireland  £1 million  —  Carberry Island, in Dumanus Bay, Co. Cork is the perfect place for seal-spotting, if that’s your kind of thing.

• Tantalising timepiece   £42,795  —  How about a Jaeger LeCoultre Reverso Septantieme watch. There’s only 500 of these beauties in the world.

• Most expensive painting  £73 million  —  That was the rumoured price paid for Gustav Klimt’s gold encrusted portrait, the Mona Lisa of Austria. Previously looted by the Nazis it was only returned to its rightful owner in 2006.

• Hire a pop star  £1.5million  —  That was enough cash to persuade Jennifer Lopez to sing at the birthday bash of a Russian billionaire’s wife. Westlife might be a tad cheaper.

• Private jet  £20 million  —  A Gulfstream Jet is perfect for thrill seekers who want to get somewhere in a hurry.

• A town in America  £10 million  —  Hollywood actress Kim Basinger splashed that kind of cash in 1989 when she bought Braselton, Georgia in USA (as you do).

• Flashy earrings  £4,200,000  —  Another gift for the girls: Harry Winston, ‘jeweller to the stars’ in Beverly Hills has created a pair of Diamond Drop Earrings, thought to be the world’s most expensive ever.

• David Beckham  £132,750,000  —  That’ll cover the cost of his £128million five-year transfer fee to Galaxy, school fees for the boys and a new wardrobe for Posh. Your local footie team will soon be seeing off the competition.

• Monster diamond  £8 million  —  Sotheby’s Diamonds have a flawless white diamond weighing in at a hefty 108 carats.

• A Life Coach  £42,000  —  Hire a first class personal coach for six months. They’ll help you achieve those ambitious goals like, er, spending every last penny of your billion…

• Shades  £72  —  With all those dazzling diamonds you’ll need some sunnies to protect you from the glare!

• A week on a hired yacht  £540,000  — ‘Constellation’ sleeps 44 guests and houses a beauty salon, open-air restaurant and sun deck with Jacuzzi. Oh, and a helicopter landing pad.

• Personal butler and housekeeper for a year  £75,000  —  For those too lazy to answer the front door or lift a finger to help with the housework.