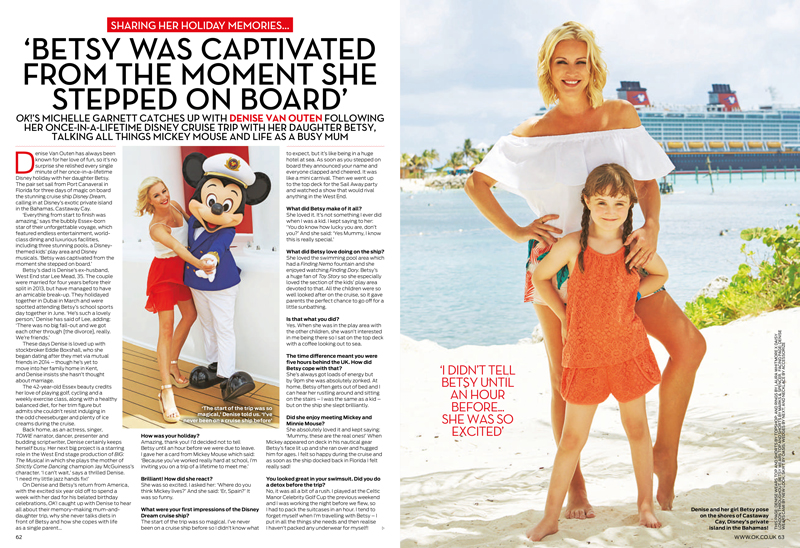 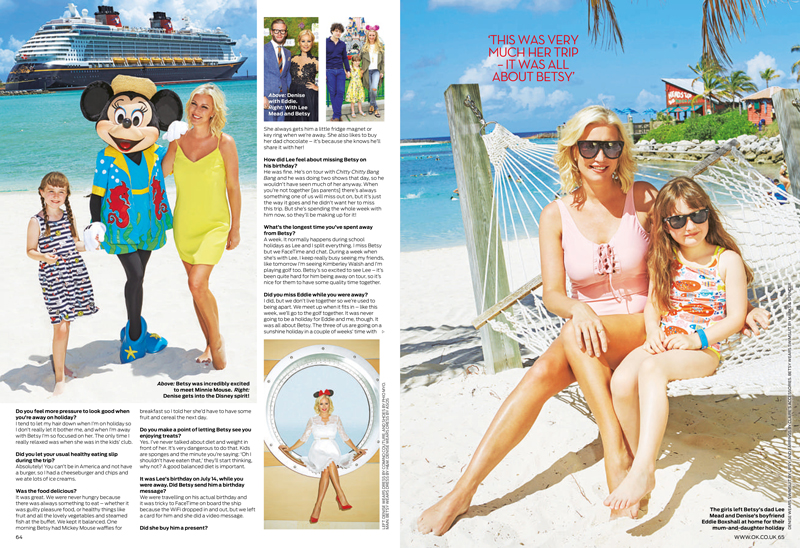 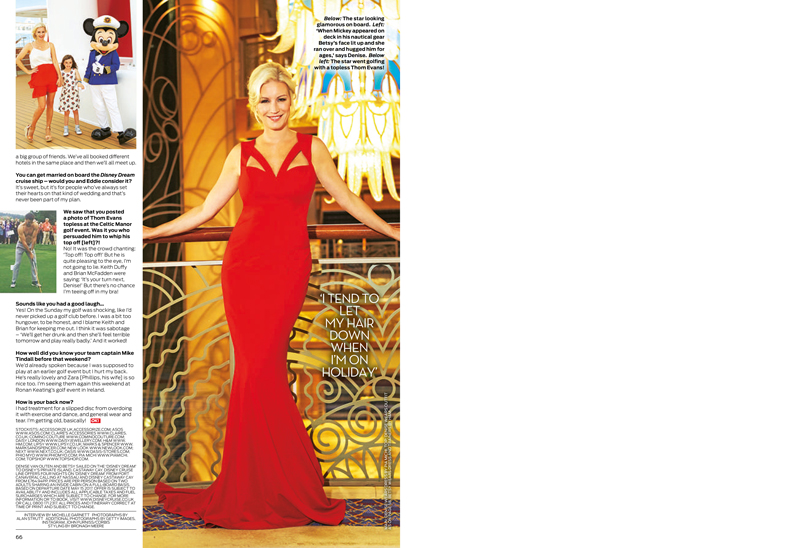 TV and radio personality Denise Van Outen told me all about her wonderful Disney adventure with daughter Betsy.

I caught up with Denise Van Outen following her once-in-a-lifetime Disney cruise trip with her daughter Betsy, talking all things Mickey Mouse and life as a busy mum…

Denise Van Outen has always been known for her love of fun, so it’s no surprise she relished every single minute of her once-in-a-lifetime Disney holiday with her daughter Betsy. The pair set sail from Port Canaveral in Florida for three days of magic on board the stunning cruise ship Disney Dream, calling in at Disney’s exotic private island in the Bahamas, Castaway Cay.

‘Everything from start to finish was amazing,’ says the bubbly Essex-born star of their unforgettable voyage, which featured endless entertainment, world-class dining and luxurious facilities, including three stunning pools, a Disney-themed kids’ play area and Disney musicals. ‘Betsy was captivated from the moment she stepped on board.’

Betsy’s dad is Denise’s ex-husband, West End star Lee Mead, 35. The couple were married for four years before their split in 2013, but have managed to have an amicable break-up. They holidayed together in Dubai in March and were spotted attending Betsy’s school sports day together in June. ‘He’s such a lovely person,’ Denise has said of Lee, adding: ‘There was no big fall-out and we got each other through [the divorce], really. We’re friends.’

These days Denise is loved up with stockbroker Eddie Boxshall, who she began dating after they met via mutual friends in 2014 – though he’s yet to move into her family home in Kent, and Denise insists she hasn’t thought about marriage.

The 42-year-old Essex beauty credits her love of playing golf, cycling and a weekly exercise class, along with a healthy balanced diet, for her trim figure but admits she couldn’t resist indulging in the odd cheeseburger and plenty of ice creams during the cruise.

Back home, as an actress, singer, TOWIE narrator, dancer, presenter and budding scriptwriter, Denise certainly keeps herself busy. Her next big project is a starring role in the West End stage production of BIG: The Musical in which she plays the mother of Strictly Come Dancing champion Jay McGuiness’s character. ‘I can’t wait,’ says a thrilled Denise. ‘I need my little jazz hands fix!’

On Denise and Betsy’s return from America, with the excited six year old off to spend a week with her dad for his belated birthday celebrations, OK! caught up with Denise to hear all about their memory-making mum-and-daughter trip, why she never talks diets in front of Betsy and how she copes with life as a single parent…

How was your holiday? Amazing, thank you! I’d decided not to tell Betsy until an hour before we were due to leave. I gave her a card from Mickey Mouse which said: ‘Because you’ve worked really hard at school, I’m inviting you on a trip of a lifetime to meet me.’ Brilliant!

How did she react? She was so excited. I asked her: ‘Where do you think Mickey lives?’ And she said: ‘Er, Spain?’ It was so funny.

What were your first impressions of the Disney Dream cruise ship? The start of the trip was so magical. I’ve never been on a cruise ship before so I didn’t know what to expect, but it’s like being in a huge hotel at sea. As soon as you stepped on board they announced your name and everyone clapped and cheered. It was like a mini carnival. Then we went up to the top deck for the Sail Away party and watched a show that would rival anything in the West End.

What did Betsy make of it all? She loved it. It’s not something I ever did when I was a kid. I kept saying to her: ‘You do know how lucky you are, don’t you?’ And she said: ‘Yes Mummy, I know this is really special.’

What did Betsy love doing on the ship? She loved the swimming pool area which had a Finding Nemo fountain and she enjoyed watching Finding Dory. Betsy’s a huge fan of Toy Story so she especially loved the section of the kids’ play area devoted to that. All the children were so well looked after on the cruise, so it gave parents the perfect chance to go off for a little sunbathing.

Is that what you did? Yes. When she was in the play area with the other children, she wasn’t interested in me being there so I sat on the top deck with a coffee looking out to sea.

The time difference meant you were five hours behind the UK. How did Betsy cope with that? She’s always got loads of energy but by 9pm she was absolutely zonked. At home, Betsy often gets out of bed and I can hear her rustling around and sitting on the stairs – I was the same as a kid – but on the ship she slept brilliantly.

Did she enjoy meeting Mickey and Minnie Mouse? She absolutely loved it and kept saying: ‘Mummy, these are the real ones!’ When Mickey appeared on deck in his nautical gear Betsy’s face lit up and she ran over and hugged him for ages. I felt so happy during the cruise and as soon as the ship docked back in Florida I felt really sad!

You looked great in your swimsuit. Did you do a detox before the trip? No, it was all a bit of a rush. I played at the Celtic Manor Celebrity Golf Cup the previous weekend and I was working the night before we flew, so I had to pack the suitcases in an hour. I tend to forget myself when I’m travelling with Betsy – I put in all the things she needs and then realise I haven’t packed any underwear for myself!

Do you feel more pressure to look good when you’re away on holiday? I tend to let my hair down when I’m on holiday so I don’t really let it bother me, and when I’m away with Betsy I’m so focused on her. The only time I really relaxed was when she was in the kids’ club.

Did you let your usual healthy eating slip during the trip? Absolutely! You can’t be in America and not have a burger, so I had a cheeseburger and chips and we ate lots of ice creams.

Was the food delicious? It was great. We were never hungry because there was always something to eat – whether it was guilty pleasure food, or healthy things like fruit and all the lovely vegetables and steamed fish at the buffet. We kept it balanced. One morning Betsy had Mickey Mouse waffles for breakfast so I told her she’d have to have some fruit and cereal the next day.

Do you make a point of letting Betsy see you enjoying treats? Yes. I’ve never talked about diet and weight in front of her. It’s very dangerous to do that. Kids are sponges and the minute you’re saying: ‘Oh I shouldn’t have eaten that,’ they’ll start thinking, why not? A good balanced diet is important. It was Lee’s birthday on July 14, while you were away.

Did Betsy send him a birthday message? We were travelling on his actual birthday and it was tricky to FaceTime on board the ship because the WiFi dropped in and out, but we left a card for him and she did a video message.

Did she buy him a present? She always gets him a little fridge magnet or key ring when we’re away. She also likes to buy her dad chocolate – it’s because she knows he’ll share it with her!

How did Lee feel about missing Betsy on his birthday? He was fine. He’s on tour with Chitty Chitty Bang Bang and he was doing two shows that day, so he wouldn’t have seen much of her anyway. When you’re not together [as parents] there’s always something one of us will miss out on, but it’s just the way it goes and he didn’t want her to miss this trip. But she’s spending the whole week with him now, so they’ll be making up for it!

What’s the longest time you’ve spent away from Betsy? A week. It normally happens during school holidays as Lee and I split everything. I miss Betsy but we FaceTime and chat. During a week when she’s with Lee, I keep really busy seeing my friends, like tomorrow I’m seeing Kimberley Walsh and I’m playing golf too. Betsy’s so excited to see Lee – it’s been quite hard for him being away on tour, so it’s nice for them to have some quality time together.

Did you miss Eddie while you were away? I did, but we don’t live together so we’re used to being apart. We meet up when it fits in – like this week, we’ll go to the golf together. It was never going to be a holiday for Eddie and me, though. It was all about Betsy. The three of us are going on a sunshine holiday in a couple of weeks’ time with a big group of friends. We’ve all booked different hotels in the same place and then we’ll all meet up.

You can get married on board the Disney Dream cruise ship – would you and Eddie consider it? It’s sweet, but it’s for people who’ve always set their hearts on that kind of wedding and that’s never been part of my plan.

We saw that you posted a photo of Thom Evans topless at the Celtic Manor golf event. Was it you who persuaded him to whip his top off?! No! It was the crowd chanting: ‘Top off! Top off!’ but he is quite pleasing to the eye, I’m not going to lie. Keith Duffy and Brian McFadden were saying: ‘It’s your turn next, Denise!’ but there’s no chance I’m teeing off in my bra! Sounds like you had a good laugh… yes! On the Sunday my golf was shocking, like I’d never picked up a golf club before. I was a bit too hungover, to be honest, and i blame Keith and Brian for keeping me out. I think it was sabotage – ‘we’ll get her drunk and then she’ll feel terrible tomorrow and play really badly.’ and it worked!

How well did you know your team captain Mike Tindall before that weekend? We’d already spoken because I was supposed to play at an earlier golf event but I hurt my back. He’s really lovely and Zara [Phillips, his wife] is so nice too. I’m seeing them again this weekend at Ronan Keating’s golf event in Ireland.

How is your back now? I had treatment for a slipped disc from overdoing it with exercise and dance, and general wear and tear. I’m getting old, basically!