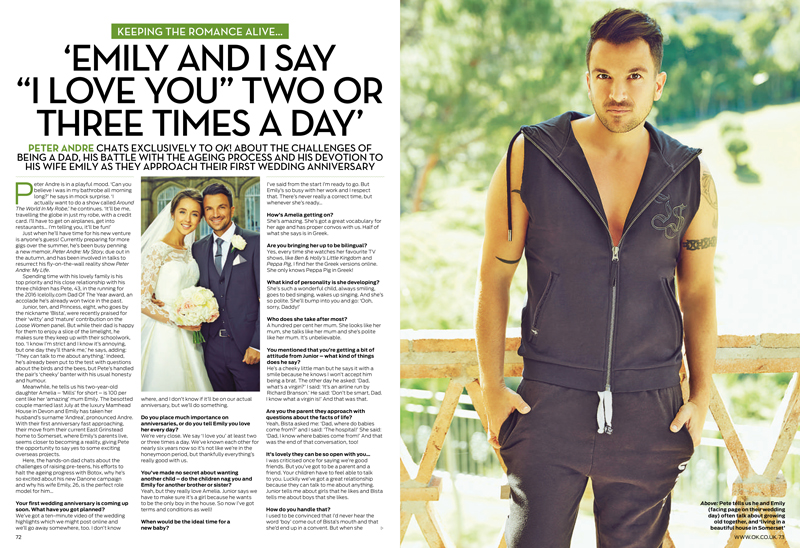 Peter Andre told me about his upcoming first wedding anniversary with wife Emily and plans to expand their family. 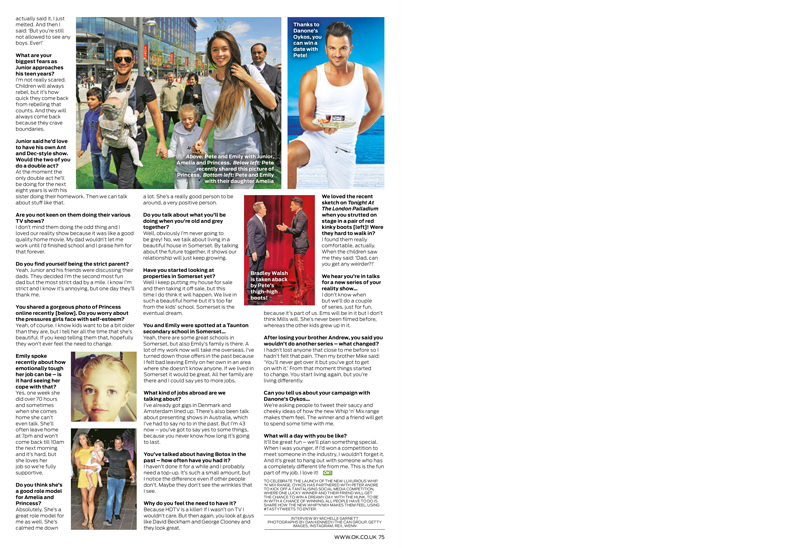 Peter Andre chats exclusively to OK! about the challenges of being a dad, his battle with the ageing process and his devotion to his wife Emily as they approach their first wedding anniversary…

Peter Andre is in a playful mood. ‘Can you believe I was in my bathrobe all morning long?’ he says in mock surprise. ‘I actually want to do a show called Around The World In My Robe,’ he continues. ‘It’ll be me, travelling the globe in just my robe, with a credit card. I’ll have to get on airplanes, get into restaurants… I’m telling you, it’ll be fun!’

Just when he’ll have time for his new venture is anyone’s guess! Currently preparing for more gigs over the summer, he’s been busy penning a new memoir, Peter Andre: My Story, due out in the autumn, and has been involved in talks to resurrect his fly-on-the-wall reality show Peter Andre: My Life.

Spending time with his lovely family is his top priority and his close relationship with his three children has Pete, 43, in the running for the 2016 Icelolly.com Dad Of The Year award, an accolade he’s already won twice in the past. Junior, ten, and Princess, eight, who goes by the nickname ‘Bista’, were recently praised for their ‘witty’ and ‘mature’ contribution on the Loose Women panel.

But while their dad is happy for them to enjoy a slice of the limelight, he makes sure they keep up with their schoolwork, too. ‘I know I’m strict and I know it’s annoying, but one day they’ll thank me,’ he says, adding: ‘They can talk to me about anything.’ Indeed, he’s already been put to the test with questions about the birds and the bees, but Pete’s handled the pair’s ‘cheeky’ banter with his usual honesty and humour.

Meanwhile, he tells us his two-year-old daughter Amelia – ‘Mills’ for short – is 100 per cent like her ‘amazing’ mum Emily. The besotted couple married last July at the luxury Mamhead House in Devon and Emily has taken her husband’s surname ‘Andrea’, pronounced Andre.

With their first anniversary fast approaching, their move from their current East Grinstead home to Somerset, where Emily’s parents live, seems closer to becoming a reality, giving Pete the opportunity to say yes to some exciting overseas projects.

Here, the hands-on dad chats about the challenges of raising pre-teens, his efforts to halt the ageing progress with Botox, why he’s so excited about his new Danone campaign and why his wife Emily, 26, is the perfect role model for him…

Your first wedding anniversary is coming up soon. What have you got planned? We’ve got a ten-minute video of the wedding highlights which we might post online and we’ll go away somewhere, too. I don’t know where, and I don’t know if it’ll be on our actual anniversary, but we’ll do something.

Do you place much importance on anniversaries, or do you tell Emily you love her every day? We’re very close. We say ‘I love you’ at least two or three times a day. We’ve known each other for nearly six years now so it’s not like we’re in the honeymoon period, but thankfully everything’s really good with us.

You’ve made no secret about wanting another child – do the children nag you and Emily for another brother or sister? Yeah, but they really love Amelia. Junior says we have to make sure it’s a girl because he wants to be the only boy in the house. So now I’ve got terms and conditions as well!

When would be the ideal time for a new baby? I’ve said from the start I’m ready to go. But Emily’s so busy with her work and I respect that. There’s never really a correct time, but whenever she’s ready…

How’s Amelia getting on? She’s amazing. She’s got a great vocabulary for her age and has proper convos with us. Half of what she says is in Greek.

Are you bringing her up to be bilingual? Yes, every time she watches her favourite TV shows, like Ben & Holly’s Little Kingdom and Peppa Pig, I find her the Greek versions online. She only knows Peppa Pig in Greek!

What kind of personality is she developing? She’s such a wonderful child, always smiling, goes to bed singing, wakes up singing. And she’s so polite. She’ll bump into you and go: ‘Ooh, sorry, Daddy!’

You mentioned that you’re getting a bit of attitude from Junior – what kind of things does he say? He’s a cheeky little man but he says it with a smile because he knows I won’t accept him being a brat. The other day he asked: ‘Dad, what’s a virgin?’ I said: ‘It’s an airline run by Richard Branson.’ He said: ‘Don’t be smart, Dad. I know what a virgin is!’ And that was that.

Are you the parent they approach with questions about the facts of life? Yeah, Bista asked me: ‘Dad, where do babies come from?’ and I said: ‘The hospital!’ She said: ‘Dad, I know where babies come from!’ And that was the end of that conversation, too!

It’s lovely they can be so open with you… I was criticised once for saying we’re good friends. But you’ve got to be a parent and a friend. Your children have to feel able to talk to you. Luckily we’ve got a great relationship because they can talk to me about anything. Junior tells me about girls that he likes and Bista tells me about boys that she likes.

How do you handle that? I used to be convinced that I’d never hear the word ‘boy’ come out of Bista’s mouth and that she’d end up in a convent. But when she actually said it, I just melted. And then I said: ‘But you’re still not allowed to see any boys. ever!’

What are your biggest fears as Junior approaches his teen years? I’m not really scared. Children will always rebel, but it’s how quick they come back from rebelling that counts. And they will always come back because they crave boundaries.

Junior said he’d love to have his own Ant and Dec-style show. Would the two of you do a double act? At the moment the only double act he’ll be doing for the next eight years is with his sister doing their homework. Then we can talk about stuff like that.

Are you not keen on them doing their various TV shows? I don’t mind them doing the odd thing and I loved our reality show because it was like a good quality home movie. My dad wouldn’t let me work until I’d finished school and I praise him for that forever.

Do you find yourself being the strict parent? Yeah. Junior and his friends were discussing their dads. They decided I’m the second most fun dad but the most strict dad by a mile. I know I’m strict and I know it’s annoying, but one day they’ll thank me.

You shared a gorgeous photo of Princess online recently. Do you worry about the pressures girls face with self-esteem? Yeah, of course. I know kids want to be a bit older than they are, but I tell her all the time that she’s beautiful. If you keep telling them that, hopefully they won’t ever feel the need to change.

Emily spoke recently about how emotionally tough her job can be – is it hard seeing her cope with that? Yes, one week she did over 70 hours and sometimes when she comes home she can’t even talk. She’ll often leave home at 7pm and won’t come back till 10am the next morning and it’s hard, but she loves her job so we’re fully supportive.

Do you think she’s a good role model for Amelia and Princess? Absolutely. She’s a great role model for me as well. She’s calmed me down a lot. She’s a really good person to be around, a very positive person.

Do you talk about what you’ll be doing when you’re old and grey together? Well, obviously I’m never going to be grey! No, we talk about living in a beautiful house in Somerset. By talking about the future together, it shows our relationship will just keep growing.

Have you started looking at properties in Somerset yet? Well I keep putting my house for sale and then taking it off sale, but this time I do think it will happen. We live in such a beautiful home but it’s too far from the kids’ school. Somerset is the eventual dream.

You and Emily were spotted at a Taunton secondary school in Somerset… Yeah, there are some great schools in Somerset, but also Emily’s family is there. A lot of my work now will take me overseas. I’ve turned down those offers in the past because I felt bad leaving Emily on her own in an area where she doesn’t know anyone. If we lived in Somerset it would be great. All her family are there and I could say yes to more jobs.

What kind of jobs abroad are we talking about? I’ve already got gigs in Denmark and Amsterdam lined up. There’s also been talk about presenting shows in Australia, which I’ve had to say no to in the past. But I’m 43 now – you’ve got to say yes to some things, because you never know how long it’s going to last.

You’ve talked about having Botox in the past – how often have you had it? I haven’t done it for a while and I probably need a top-up. It’s such a small amount, but I notice the difference even if other people don’t. Maybe they don’t see the wrinkles that I see.

Why do you feel the need to have it? Because HDTV is a killer! If I wasn’t on TV I wouldn’t care. But then again, you look at guys like David Beckham and George Clooney and they look great.

We loved the recent sketch on Tonight At The London Palladium when you strutted on stage in a pair of red kinky boots! Were they hard to walk in? I found them really comfortable, actually. When the children saw me they said: ‘Dad, can you get any weirder?!’

We hear you’re in talks for a new series of your reality show… I don’t know when but we’ll do a couple of series, just for fun, because it’s part of us. Ems will be in it but I don’t think mills will. She’s never been filmed before, whereas the other kids grew up in it.

After losing your brother Andrew, you said you wouldn’t do another series – what changed? I hadn’t lost anyone that close to me before so I hadn’t felt that pain. Then my brother mike said: ‘You’ll never get over it but you’ve got to get on with it.’ From that moment things started to change. You start living again, but you’re living differently.

Can you tell us about your campaign with Danone’s Oykos… We’re asking people to Tweet their saucy and cheeky ideas of how the new whip ‘n’ mix range makes them feel. The winner and a friend will get to spend some time with me. What will a day with you be like? It’ll be great fun – we’ll plan something special. When I was younger, if I’d won a competition to meet someone in the industry, I wouldn’t forget it. And it’s great to hang out with someone who has a completely different life from me. This is the fun part of my job. I love it!