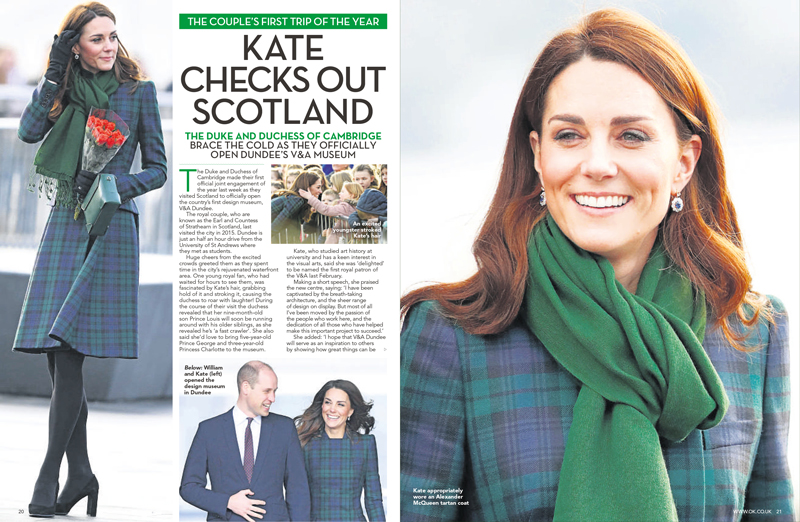 Here’s my royal report for OK! magazine on Kate’s flying visit to Scotland. Along with her husband William, she was checking out Dundee’s V&A Museum. 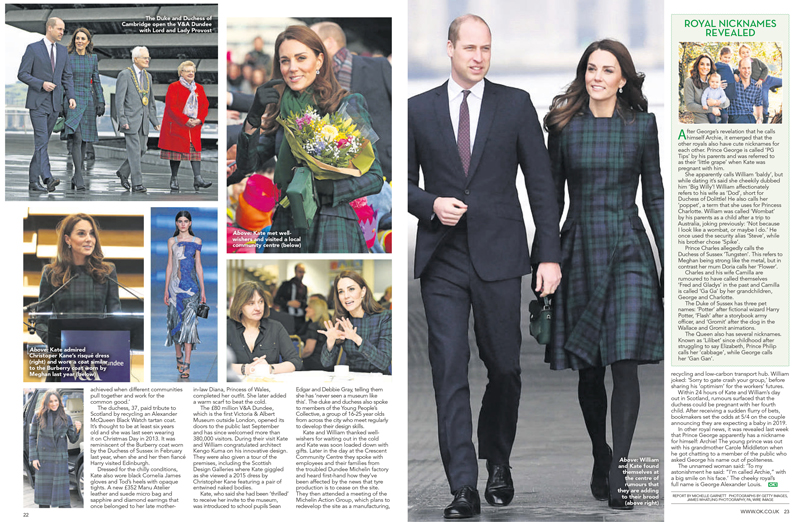 The Duke and Duchess of Cambridge made their first official joint engagement of the year last week as they visited Scotland to officially open the country’s first design museum, V&A Dundee.

The royal couple, who are known as the Earl and Countess of Strathearn in Scotland, last visited the city in 2015. Dundee is just an half an hour drive from the University of St Andrews where they met as students.

Huge cheers from the excited crowds greeted them as they spent time in the city’s rejuvenated waterfront area. One young royal fan, who had waited for hours to see them, was fascinated by Kate’s hair, grabbing hold of it and stroking it, causing the duchess to roar with laughter! During the course of their visit the duchess revealed that her nine-month-old son Prince Louis will soon be running around with his older siblings, as she revealed he’s ‘a fast crawler’. She also said she’d love to bring five-year-old Prince George and three-year-old Princess Charlotte to the museum. Kate, who studied art history at university and has a keen interest in the visual arts, said she was ‘delighted’ to be named the first royal patron of the V&A last February.

Making a short speech, she praised the new centre, saying: ‘I have been captivated by the breath-taking architecture, and the sheer range of design on display. But most of all I’ve been moved by the passion of the people who work here, and the dedication of all those who have helped make this important project to succeed.’

She added: ‘I hope that V&A Dundee will serve as an inspiration to others by showing how great things can be achieved when different communities pull together and work for the common good.’

The duchess, 37, paid tribute to Scotland by recycling an Alexander McQueen Black Watch tartan coat. It’s thought to be at least six years old and she was last seen wearing it on Christmas Day in 2013. It was reminiscent of the Burberry coat worn by the Duchess of Sussex in February last year, when she and her then fiancé Harry visited Edinburgh.

Dressed for the chilly conditions, Kate also wore black Cornelia James gloves and Tod’s heels with opaque tights. A new £352 Manu Atelier leather and suede micro bag and sapphire and diamond earrings that once belonged to her late mother-in- law Diana, Princess of Wales, completed her outfit. She later added a warm scarf to beat the cold.

The £80 million V&A Dundee, which is the first Victoria & Albert Museum outside London, opened its doors to the public last September and has since welcomed more than 380,000 visitors. During their visit Kate and William congratulated architect Kengo Kuma on his innovative design. They were also given a tour of the premises, including the Scottish Design Galleries where Kate giggled as she viewed a 2015 dress by Christopher Kane featuring a pair of entwined naked bodies.

Kate, who said she had been ‘thrilled’ to receive her invite to the museum, was introduced to school pupils Sean Edgar and Debbie she has ‘never seen a museum like this’. The duke and duchess also spoke to members of the Young People’s Collective, a group of 16-25 year olds from across the city who meet regularly to develop their design skills.

Kate and William thanked wellwishers for waiting out in the cold and Kate was soon loaded down with gifts. Later in the day at the Crescent Community Centre they spoke with employees and their families from the troubled Dundee Michelin factory and heard first-hand how they’ve been affected by the news that tyre production is to cease on the site.

They then attended a meeting of the Michelin Action Group, which plans to redevelop the site as a manufacturing, recycling and low-carbon transport hub. William joked: ‘Sorry to gate crash your group,’ before sharing his ‘optimism’ for the workers’ futures.

Within 24 hours of Kate and William’s day out in Scotland, rumours surfaced that the duchess could be pregnant with her fourth child. After receiving a sudden flurry of bets, bookmakers set the odds at 5/4 on the couple announcing they are expecting a baby in 2019.

In other royal news, it was revealed last week that Prince George apparently has a nickname for himself: Archie! The young prince was out with his grandmother Carole Middleton when he got chatting to a member of the public who asked George his name out of politeness. The unnamed woman said: ‘To my astonishment he said: “I’m called Archie,” with a big smile on his face.’ The cheeky royal’s full name is George Alexander Louis.

After George’s revelation that he calls himself Archie, it emerged that the other royals also have cute nicknames for each other. Prince George is called ‘PG Tips’ by his parents and was referred to as their ‘little grape’ when Kate was pregnant with him.

She apparently calls William ‘baldy’, but while dating it’s said she cheekily dubbed him ‘Big Willy’! William affectionately refers to his wife as ‘Dod’, short for Duchess of Dolittle! He also calls her ‘poppet’, a term that she uses for Princess Charlotte. William was called ‘Wombat’

by his parents as a child after a trip to Australia, joking previously: ‘Not because I look like a wombat, or maybe I do.’ He once used the security alias ‘Steve’, while his brother chose ‘Spike’.

Prince Charles allegedly calls the Duchess of Sussex ‘Tungsten’. This refers to Meghan being strong like the metal, but in contrast her mum Doria calls her ‘Flower’. Charles and his wife Camilla are rumoured to have called themselves ‘Fred and Gladys’ in the past and Camilla is called ‘Ga Ga’ by her grandchildren, George and Charlotte.

The Duke of Sussex has three pet names: ‘Potter’ after fictional wizard Harry Potter, ‘Flash’ after a storybook army officer, and ‘Gromit’ after the dog in the Wallace and Gromit animations.

The Queen also has several nicknames. Known as ‘Lilibet’ since childhood after struggling to say Elizabeth, Prince Philip calls her ‘cabbage’, while George calls her ‘Gan Gan’.