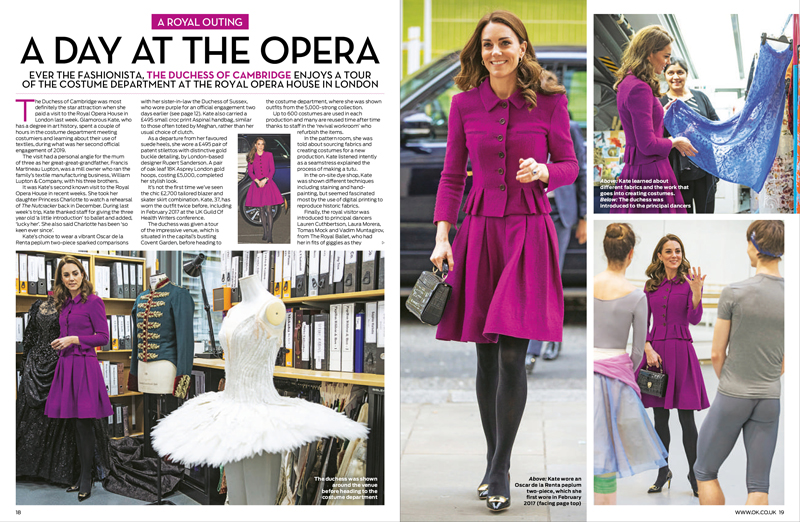 I love checking out Kate’s latest wardrobe choices and she didn’t disappoint during a visit to the Royal Opera House in London which I wrote about for OK! magazine. 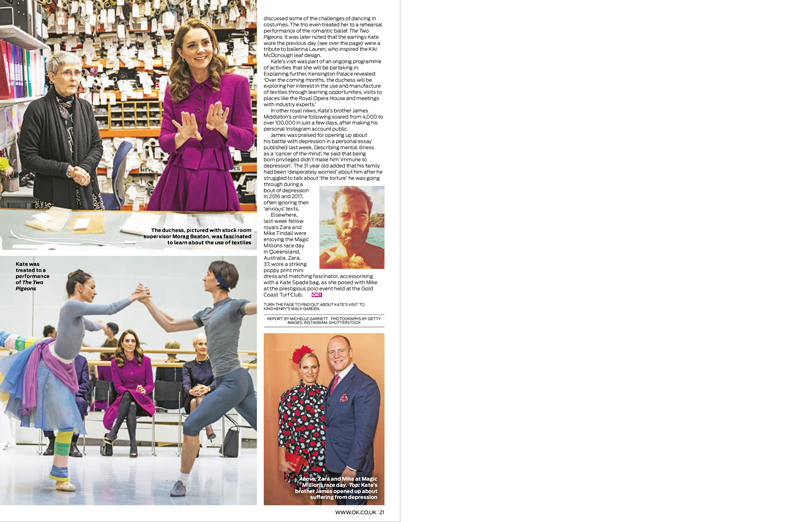 A day at the opera

Ever the fashionista, the Duchess of Cambridge enjoys a tour of the costume department at the Royal Opera House in London…

The Duchess of Cambridge was most definitely the star attraction when she paid a visit to the Royal Opera House in London last week. Glamorous Kate, who has a degree in art history, spent a couple of hours in the costume department meeting costumiers and learning about their use of textiles, during what was her second official engagement of 2019.

The visit had a personal angle for the mum of three as her great-great-grandfather, Francis Martineau Lupton, was a mill owner who ran the family’s textile manufacturing business, William Lupton & Company, with his three brothers.

It was Kate’s second known visit to the Royal Opera House in recent weeks. She took her daughter Princess Charlotte to watch a rehearsal of The Nutcracker back in December. During last week’s trip, Kate thanked staff for giving the three year old ‘a little introduction’ to ballet and added, ‘lucky her’. She also said Charlotte has been ‘so keen ever since’.

Kate’s choice to wear a vibrant Oscar de la Renta peplum two-piece sparked comparisons with her sister-in-law the Duchess of Sussex, who wore purple for an official engagement two days earlier (see page 12). Kate also carried a £495 small croc print Aspinal handbag, similar to those often toted by Meghan, rather than her usual choice of clutch.

As a departure from her favoured suede heels, she wore a £495 pair of patent stilettos with distinctive gold buckle detailing, by London-based designer Rupert Sanderson. A pair of oak leaf 18K Asprey London gold hoops, costing £5,000, completed her stylish look.

It’s not the first time we’ve seen the chic £2,700 tailored blazer and skater skirt combination. Kate, 37, has worn the outfit twice before, including in February 2017 at the UK Guild Of Health Writers conference.

The duchess was given a tour of the impressive venue, which is situated in the capital’s bustling Covent Garden, before heading to the costume department, where she was shown outfits from the 5,000-strong collection.

Up to 600 costumes are used in each production and many are reused time after time thanks to staff in the ‘revival workroom’ who refurbish the items.

In the pattern room, she was told about sourcing fabrics and creating costumes for a new production. Kate listened intently as a seamstress explained the process of making a tutu. In the on-site dye shop, Kate was shown different techniques including staining and handpainting, but seemed fascinated most by the use of digital printing to reproduce historic fabrics.

Finally, the royal visitor was introduced to principal dancers Lauren Cuthbertson, Laura Morera, Tomas Mock and Vadim Muntagirov, from The Royal Ballet, who had her in fits of giggles as they discussed some of the challenges of dancing in costumes. the trio even treated her to a rehearsal performance of the romantic ballet The Two Pigeons.

It was later noted that the earrings Kate wore the previous day (see over the page) were a tribute to ballerina Lauren, who inspired the Kiki McDonough leaf design. Kate’s visit was part of an ongoing programme of activities that she will be partaking in. Explaining further, Kensington Palace revealed: ‘Over the coming months, the duchess will be exploring her interest in the use and manufacture of textiles through learning opportunities, visits to places like the Royal Opera House and meetings with industry experts.’

In other royal news, Kate’s brother James Middleton’s online following soared from 4,000 to over 100,000 in just a few days, after making his personal instagram account public. James was praised for opening up about his battle with depression in a personal essay published last week. Describing mental illness as a ‘cancer of the mind’, he said that being born privileged didn’t make him ‘immune to depression’. The 31 year old added that his family had been ‘desperately worried’ about him after he struggled to talk about ‘the torture’ he was going through during a bout of depression in 2016 and 2017, often ignoring their ‘anxious’ texts.