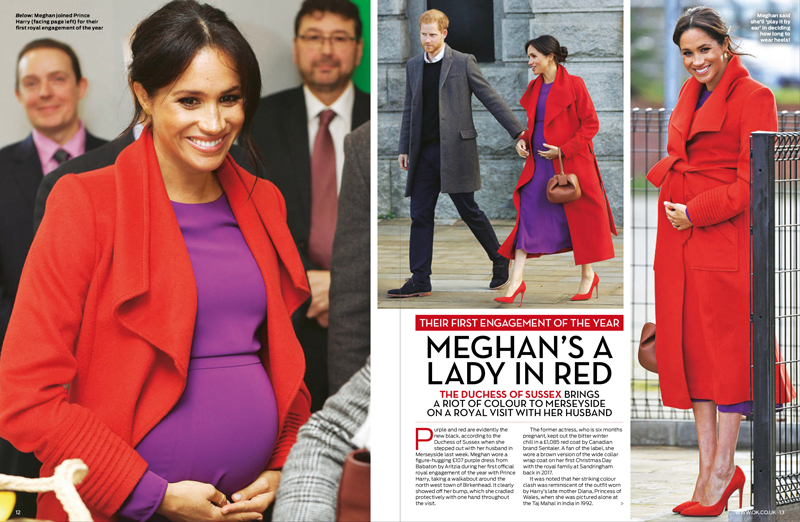 There was no missing Meghan when she visited Liverpool with Harry, as my report in OK! magazine proved. Looking positively vibrant during their visit, the pregnant duchess tucked into some lemon drizzle cake while the duke revealed he was fast developing a love of meditation, no doubt encouraged by his zen wife. 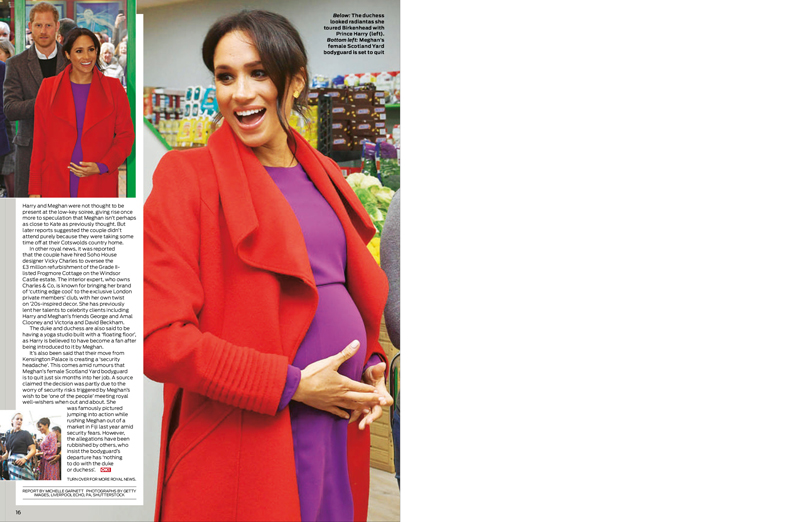 Their First Engagement of the Year

Meghan’s a Lady in Red

Purple and red are evidently the new black, according to the Duchess of Sussex when she stepped out with her husband in Merseyside last week. Meghan wore a figure-hugging £107 purple dress from Babaton by Aritzia during her first official royal engagement of the year with Prince Harry, taking a walkabout around the north west town of Birkenhead. It clearly showed off her bump, which she cradled protectively with one hand throughout the visit.

The former actress, who is six months pregnant, kept out the bitter winter chill in a £1,085 red coat by Canadian brand Sentaler. A fan of the label, she wore a brown version of the wide collar wrap coat on her first Christmas Day with the royal family at Sandringham back in 2017.

It was noted that her striking colour clash was reminiscent of the outfit worn by Harry’s late mother Diana, Princess of Wales, when she was pictured alone at the Taj Mahal in India in 1992.

Known for their tactile behaviour in public, Harry and Meghan once again demonstrated their affection placing their arms around one another as they spoke to the crowd. The pair were inundated with gifts, including a huge teddy for the baby which Harry, 34, was seen carrying.

The couple were also given a ‘born in 2019’ Babygro by local St Werburgh’s school children – and namesakes – Harry Edwards and Megan O’Carroll. Playful Prince Harry led the crowd in a chorus of Happy Birthday when he heard Megan had turned nine that day. Harry was then overhead asking a mum in the crowd how she spelt her daughter’s name, Lily. ‘It’s very exciting,’ he said of his impending fatherhood.

Harry and Meghan, who had travelled to Merseyside from London that morning, chatted to the assembled crowds for over 45 minutes, and when hypnobirthing teacher Sonia Richards told Meghan: ‘I’m looking forward to the baby coming,’ the radiant duchess replied: ‘So are we.’

Meghan also revealed during the walkabout that her pregnancy has ‘gone so quickly’ and that she’s taking it ‘one day at a time’ in terms of how long she’ll keep wearing heels. Harry was quick to spot a sign held by four-year-old Eliza Morris that read: ‘Gingers Unite – I love you Harry,’ telling her: ‘The sign is amazing!’

During their busy day, Harry and Meghan, who wed last May, visited organisations that support and empower community groups. After viewing a new sculpture in Hamilton Square, called Futility, which was erected to mark the centenary of the World War One poet Wilfred Owen’s death, they met local veterans and members of the Birkenhead

Institute Old Boys, which the poet belonged to. They also stopped by The Hive Wirral Youth Zone, where they took part in activities and workshops and visited Tomorrow’s Women Wirral, a group supporting vulnerable women, which was initially set up to support women being released from prison. While there, Harry proudly declared that he’s a ‘feminist’!

Earlier, the royal pair made a surprise visit to officially open Number 7, a citizens’ supermarket and community café run by the organisation Feeding Birkenhead. There they were seen browsing the aisles before Meghan enjoyed a welcome mug of herbal tea and some lemon drizzle cake, which she declared was ‘delicious’. Harry revealed to Buddhist monk Kelsang Sonam that he has become a huge fan of meditation, no doubt thanks to yoga fan Meghan’s influence, and practices ‘every day’. On being given a copy of Eight Steps to Happiness: The Buddhist Way of Loving Kindness, the prince said: ‘I’ll be reading this.’

Their visit to Merseyside came a few days after the Duchess of Cambridge’s 37th birthday, which she celebrated at the family’s Anmer Hall home in Norfolk. Harry and Meghan were not thought to be present at the low-key soiree, giving rise once more to speculation that Meghan isn’t perhaps as close to Kate as previously thought. But later reports suggested the couple didn’t attend purely because they were taking some time off at their Cotswolds country home.

In other royal news, it was reported that the couple have hired soho house designer Vicky Charles to oversee the £3 million refurbishment of the Grade II listed Frogmore Cottage on the Windsor Castle estate. The interiors expert, who owns Charles & Co, is known for bringing her brand of ‘cutting edge cool’ to the exclusive London private members’ club, with her own twist on ’20s-inspired decor. She has previously lent her talents to celebrity clients including

Harry and Meghan’s friends George and Amal Clooney and Victoria and David Beckham. The duke and duchess are also said to be having a yoga studio built with a ‘floating floor’ as Harry is believed to have become a fan after being introduced to it by Meghan. It’s also been said that their move from Kensington Palace is creating a ‘security headache’. This comes amid rumours that Meghan’s female Scotland Yard bodyguard is to quit just six months into her job. A source claimed the decision was partly due to the worry of security risks triggered by Meghan’s wish to be ‘one of the people’ meeting royal well-wishers when out and about. She was famously pictured jumping into action while rushing Meghan out of a market in Fiji last year amid security fears. However, the allegations have been rubbished by others, who insist the bodyguard’s departure has ‘nothing to do with the duke or duchess’.