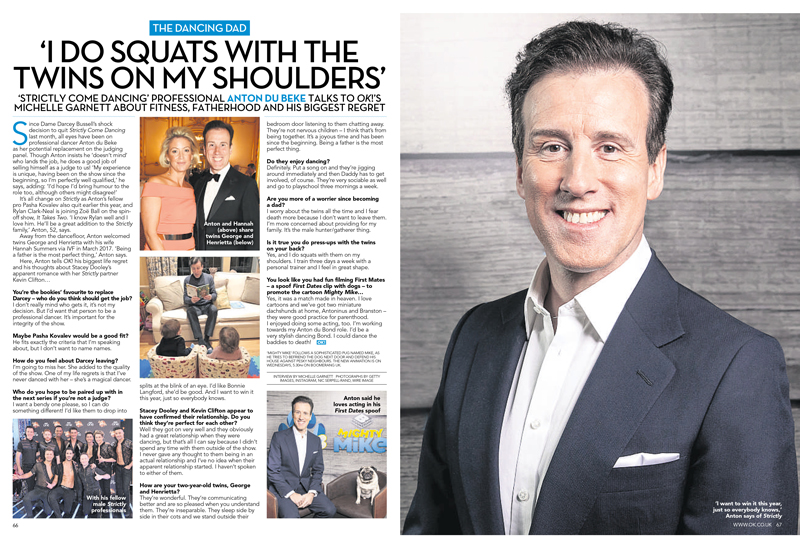 My chat with the professional dancer took place just weeks before the new Strictly judge was revealed – (next time Anton, next time!…)

Since Dame Darcey Bussell’s shock decision to quit Strictly Come Dancing last month, all eyes have been on professional dancer Anton du Beke as her potential replacement on the judging panel. Though Anton insists he ‘doesn’t mind’ who lands the job, he does a good job of selling himself as a judge to us! ‘My experience is unique, having been on the show since the beginning, so I’m perfectly well qualified,’ he says, adding: ‘I’d hope I’d bring humour to the role too, although others might disagree!’

It’s all change on Strictly as Anton’s fellow pro Pasha Kovalev also quit earlier this year, and Rylan Clark-Neal is joining Zoë Ball on the spin-off show, It Takes Two. ‘I know Rylan well and I love him. He’ll be a great addition to the Strictly family,’ Anton, 52, says.

Away from the dancefloor, Anton welcomed twins George and Henrietta with his wife Hannah Summers via IVF in March 2017. ‘Being a father is the most perfect thing,’ Anton says.

You’re the bookies’ favourite to replace Darcey – who do you think should get the job? I don’t really mind who gets it, it’s not my decision. But I’d want that person to be a professional dancer. It’s important for the integrity of the show.

Maybe Pasha Kovalev would be a good fit? He fits exactly the criteria that I’m speaking about, but I don’t want to name names.

How do you feel about Darcey leaving? I’m going to miss her. She added to the quality of the show. One of my life regrets is that I’ve never danced with her – she’s a magical dancer.

Who do you hope to be paired up with in the next series if you’re not a judge? I want a bendy one please, so I can do something different! I’d like them to drop into splits at the blink of an eye. I’d like Bonnie Langford, she’d be good. And I want to win it this year, just so everybody knows.

Stacey Dooley and Kevin Clifton appear to have confirmed their relationship. Do you think they’re perfect for each other? Well they got on very well and they obviously had a great relationship when they were dancing, but that’s all I can say because I didn’t spend any time with them outside of the show. I never gave any thought to them being in an actual relationship and I’ve no idea when their apparent relationship started. I haven’t spoken to either of them.

How are your two-year-old twins, George and Henrietta? They’re wonderful. They’re communicating better and are so pleased when you understand them. They’re inseparable. They sleep side by side in their cots and we stand outside their bedroom door listening to them chatting away. They’re not nervous children – I think that’s from being together. It’s a joyous time and has been since the beginning. Being a father is the most perfect thing.

Do they enjoy dancing? Definitely. Put a song on and they’re jigging around immediately and then Daddy has to get involved, of course. They’re very sociable as well and go to play-school three mornings a week.

Are you more of a worrier since becoming a dad? I worry about the twins all the time and I fear death more because I don’t want to leave them. I’m more concerned about providing for my family. It’s the male hunter/gatherer thing.

Is it true you do press-ups with the twins on your back? Yes, and I do squats with them on my shoulders. I train three days a week with a personal trainer and I feel in great shape.

You look like you had fun filming First Mates – a spoof First Dates clip with dogs – to promote the cartoon Mighty Mike… Yes, it was a match made in heaven. I love cartoons and we’ve got two miniature dachshunds at home, Antoninus and Branston – they were good practice for parenthood. I enjoyed doing some acting, too. I’m working towards my Anton du Bond role. I’d be a very stylish dancing Bond. I could dance the baddies to death!