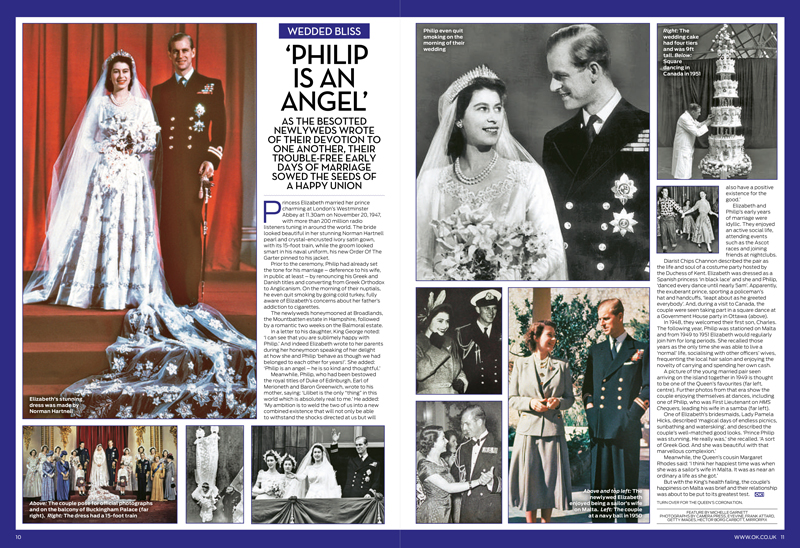 69 years after their fairytale wedding, my feature for OK! magazine’s special anniversary tribute issue took a look back at their special day.

As the besotted newlyweds wrote of their devotion to one another, their trouble-free early days of marriage sowed the seeds of a happy union…

Princess Elizabeth married her prince charming at London’s Westminster Abbey at 11.30am on November 20, 1947, with more than 200 million radio listeners tuning in around the world.

The bride looked beautiful in her stunning Norman Hartnell pearl and crystal-encrusted ivory satin gown, with its 15-foot train, while the groom looked smart in his naval uniform, his new Order Of The Garter pinned to his jacket.

Prior to the ceremony, Philip had already set the tone for his marriage – deference to his wife, in public at least – by renouncing his Greek and Danish titles and converting from Greek Orthodox to Anglicanism. On the morning of their nuptials, he even quit smoking by going cold turkey, fully aware of Elizabeth’s concerns about her father’s addiction to cigarettes.

The newlyweds honeymooned at Broadlands, the Mountbatten estate in Hampshire, followed by a romantic two weeks on the Balmoral estate. In a letter to his daughter, King George noted: ‘I can see that you are sublimely happy with Philip.’ And indeed Elizabeth wrote to her parents during her honeymoon speaking of her delight at how she and Philip ‘behave as though we had belonged to each other for years!’. She added: ‘Philip is an angel – he is so kind and thoughtful.’

Meanwhile, Philip, who had been bestowed the royal titles of Duke of Edinburgh, Earl of Merioneth and Baron Greenwich, wrote to his mother, saying: ‘Lilibet is the only “thing” in this world which is absolutely real to me.’ He added: ‘My ambition is to weld the two of us into a new combined existence that will not only be able to withstand the shocks directed at us but will also have a positive existence for the good.’

Elizabeth and Philip’s early years of marriage were idyllic. They enjoyed an active social life, attending events such as the Ascot races and joining friends at nightclubs. Diarist Chips Channon described the pair as the life and soul of a costume party hosted by the Duchess of Kent. Elizabeth was dressed as a Spanish princess ‘in black lace’ and she and Philip, ‘danced every dance until nearly 5am’. Apparently, the exuberant prince, sporting a policeman’s hat and handcuffs, ‘leapt about as he greeted everybody’. And, during a visit to Canada, the couple were seen taking part in a square dance at a Government House party in Ottawa.

In 1948, they welcomed their first son, Charles. The following year, Philip was stationed on Malta and from 1949 to 1951 Elizabeth would regularly join him for long periods. She recalled those years as the only time she was able to live a ‘normal’ life, socialising with other officers’ wives, frequenting the local hair salon and enjoying the novelty of carrying and spending her own cash. A picture of the young married pair seen arriving on the island together in 1949 is thought to be one of the Queen’s favourites.

Further photos from that era show the couple enjoying themselves at dances, including one of Philip, who was First Lieutenant on HMS Chequers, leading his wife in a samba.

One of Elizabeth’s bridesmaids, Lady Pamela Hicks, described ‘magical days of endless picnics, sunbathing and waterskiing’, and described the couple’s well-matched good looks. ‘Prince Philip was stunning. He really was,’ she recalled. ‘A sort of Greek God. And she was beautiful with that marvellous complexion.’

Meanwhile, the Queen’s cousin Margaret Rhodes said: ‘I think her happiest time was when she was a sailor’s wife in Malta. It was as near an ordinary a life as she got.’ But with the King’s health failing, the couple’s happiness on Malta was brief and their relationship was about to be put to its greatest test.