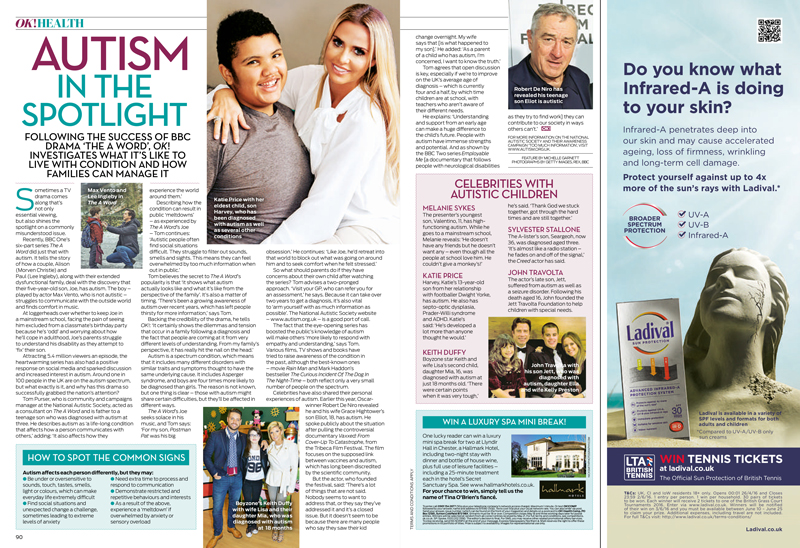 This health feature overcomes the stigma and uncovers the truths surrounding Autism.

Following the success of BBC drama ‘The A Word’, OK! investigates what it’s like to live with the condition and how families can manage it…

Sometimes a TV drama comes along that’s not only essential viewing, but also shines the spotlight on a commonly misunderstood issue. Recently, BBC One’s six-part series The A Word did just that with autism.

It tells the story of how a couple, Alison (Morven Christie) and Paul (Lee Ingleby), along with their extended dysfunctional family, deal with the discovery that their five-year-old son, Joe, has autism. The boy – played by actor Max Vento, who is not autistic – struggles to communicate with the outside world and finds comfort in music.

At loggerheads over whether to keep Joe in a mainstream school, facing the pain of seeing him excluded from a classmate’s birthday party because he’s ‘odd’ and worrying about how he’ll cope in adulthood, Joe’s parents struggle to understand his disability as they attempt to ‘fix’ their son.

Attracting 5.4 million viewers an episode, the heartwarming series has also had a positive response on social media and sparked discussion and increased interest in autism. Around one in 100 people in the UK are on the autism spectrum, but what exactly is it, and why has this drama so successfully grabbed the nation’s attention?

Tom Purser, who is community and campaigns manager at the National Autistic Society, acted as a consultant on The A Word and is father to a teenage son who was diagnosed with autism at three. He describes autism as ‘a life-long condition that affects how a person communicates with others,’ adding: ‘It also affects how they experience the world around them.’

Describing how the condition can result in public ‘meltdowns’ – as experienced by The A Word’s Joe – Tom continues: ‘Autistic people often find social situations difficult. They struggle to filter out sounds, smells and sights. This means they can feel overwhelmed by too much information when out in public.’ Tom believes the secret to The A Word’s popularity is that ‘it shows what autism actually looks like and what it’s like from the perspective of the family’. It’s also a matter of timing. ‘There’s been a growing awareness of autism over recent years, which has left people thirsty for more information,’ says Tom.

Backing the credibility of the drama, he tells OK!: ‘It certainly shows the dilemmas and tension that occur in a family following a diagnosis and the fact that people are coming at it from very different levels of understanding. From my family’s perspective, it has really hit the nail on the head.’

Autism is a spectrum condition, which means that it includes many different disorders with similar traits and symptoms thought to have the same underlying cause. It includes Asperger syndrome, and boys are four times more likely to be diagnosed than girls. The reason is not known, but one thing is clear – those with autism might share certain difficulties, but they’ll be affected in different ways. The A Word’s Joe seeks solace in his music, and Tom says: ‘For my son, Postman Pat was his big obsession.’ He continues: ‘Like Joe, he’d retreat into that world to block out what was going on around him and to seek comfort when he felt stressed.’

So what should parents do if they have concerns about their own child after watching the series? Tom advises a two-pronged approach. ‘Visit your GP, who can refer you for an assessment,’ he says. Because it can take over two years to get a diagnosis, it’s also vital to ‘arm yourself with as much information as possible’.

The National Autistic Society website – www.autism.org.uk – is a good port of call.

The fact that the eye-opening series has boosted the public’s knowledge of autism will make others ‘more likely to respond with empathy and understanding,’ says Tom. Various films, TV shows and books have tried to raise awareness of the condition in the past, although the best-known ones – movie Rain Man and Mark Haddon’s bestseller The Curious Incident Of The Dog In The Night-Time – both reflect only a very small number of people on the spectrum.

Celebrities have also shared their personal experiences of autism. Earlier this year, Oscar-winner Robert De Niro revealed he and his wife Grace Hightower’s son Elliot, 18, has autism. He spoke publicly about the situation after pulling the controversial documentary Vaxxed: From Cover-Up To Catastrophe, from the Tribeca Film Festival.

The film focuses on the supposed link between vaccines and autism, which has long been discredited by the scientific community. But the actor, who founded the festival, said: ‘There’s a lot of things that are not said. Nobody seems to want to address that, or they say they’ve addressed it and it’s a closed issue. But it doesn’t seem to be because there are many people who say they saw their kid change overnight. my wife says that [is what happened to my son].’ He added: ‘as a parent of a child who has autism, I’m concerned, I want to know the truth.’

Tom agrees that open discussion is key, especially if we’re to improve on the UK’s average age of diagnosis – which is currently four and a half, by which time children are at school, with teachers who aren’t aware of their different needs. He explains: ‘Understanding and support from an early age can make a huge difference to the child’s future. People with autism have immense strengths and potential. And as shown by the BBC two series Employable Me [a documentary that follows people with neurological disabilities as they try to find work] they can contribute to our society in ways others can’t.’

HOW TO SPOT THE COMMON SIGNS

Autism affects each person differently, but they may:

Melanie Sykes: The presenter’s youngest son, Valentino, 11, has high-functioning autism. While he goes to a mainstream school, Melanie reveals: ‘He doesn’t have any friends but he doesn’t want any – even though all the people at school love him. He couldn’t give a monkey’s!’

Katie Price: Harvey, Katie’s 13-year-old son from her relationship with footballer Dwight Yorke, has autism. He also has Septo-optic Dysplasia, Prader-Willi Syndrome and ADHD. Katie’s said: ‘He’s developed a lot more than anyone thought he would.’

Keith Duffy: Boyzone star Keith and wife Lisa’s second child, daughter Mia, 16, was diagnosed with autism at just 18 months old. ‘There were certain points when it was very tough,’ he’s said. ‘Thank god we stuck together, got through the hard times and are still together.’

Sylvester Stallone: The A-lister’s son, Seargeoh, now 36, was diagnosed aged three. ‘It’s almost like a radio station – he fades on and off of the signal,’ the Creed actor has said.