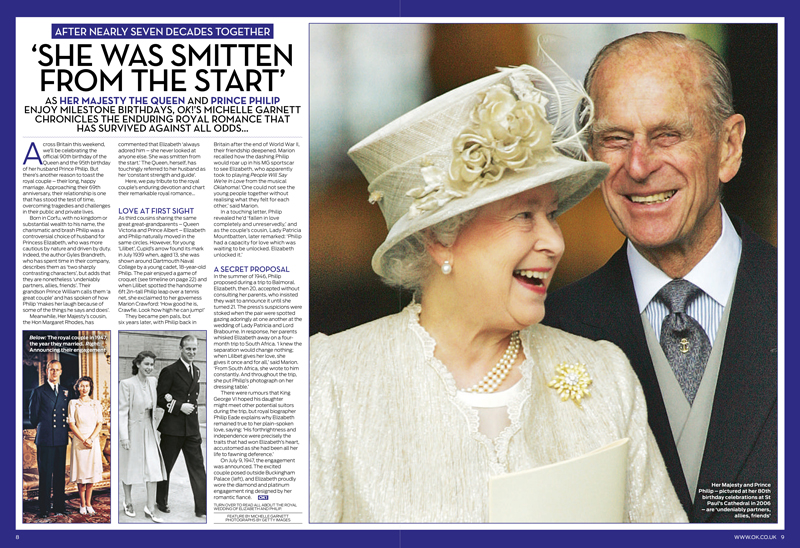 With the Queen and Prince Philip both celebrating special birthdays, I wrote this report for OK! magazine painting a vivid picture of the early days of their long and happy union.

As her majesty the Queen and Prince Philip enjoy milestone birthdays, OK! chronicles the beginnings of their enduring royal romance…

Across Britain this weekend, we’ll be celebrating the official 90th birthday of the Queen and the 95th birthday of her husband Prince Philip. But there’s another reason to toast the royal couple – their long, happy marriage. Approaching their 69th anniversary, their relationship is one that has stood the test of time, overcoming tragedies and challenges in their public and private lives.

Born in Corfu, with no kingdom or substantial wealth to his name, the charismatic and brash Philip was a controversial choice of husband for Princess Elizabeth, who was more cautious by nature and driven by duty. Indeed, the author Gyles Brandreth, who has spent time in their company, describes them as ‘two sharply contrasting characters’, but adds that they are nonetheless ‘undeniably partners, allies, friends’. Their grandson Prince William calls them ‘a great couple’ and has spoken of how Philip ‘makes her laugh because of some of the things he says and does’.

Meanwhile, Her Majesty’s cousin, the Hon Margaret Rhodes, has commented that Elizabeth ‘always adored him – she never looked at anyone else. She was smitten from the start.’ The Queen, herself, has touchingly referred to her husband as her ‘constant strength and guide’.

Here, we pay tribute to the royal couple’s enduring devotion and chart their remarkable royal romance…

As third cousins sharing the same great great-grandparents – Queen Victoria and Prince Albert – Elizabeth and Philip naturally moved in the same circles. However, for young ‘Lilibet’, Cupid’s arrow found its mark in July 1939 when, aged 13, she was shown around Dartmouth Naval College by a young cadet, 18-year-old Philip. The pair enjoyed a game of croquet and when Lilibet spotted the handsome 6ft 2in-tall Philip leap over a tennis net, she exclaimed to her governess Marion Crawford: ‘How good he is, Crawfie. Look how high he can jump!’ They became pen pals, but six years later, with Philip back in Britain after the end of World War II, their friendship deepened. Marion recalled how the dashing Philip would roar up in his MG sports car to see Elizabeth, who apparently took to playing People Will Say We’re In Love from the musical Oklahoma!. ‘One could not see the young people together without realising what they felt for each other,’ said Marion. In a touching letter, Philip revealed he’d ‘fallen in love completely and unreservedly,’ and as the couple’s cousin, Lady Patricia Mountbatten, later remarked: ‘Philip had a capacity for love which was waiting to be unlocked. Elizabeth unlocked it.’

In the summer of 1946, Philip proposed during a trip to Balmoral. Elizabeth, then 20, accepted without consulting her parents, who insisted they wait to announce it until she turned 21. The press’s suspicions were stoked when the pair were spotted gazing adoringly at one another at the wedding of Lady Patricia and Lord Brabourne. In response, her parents whisked Elizabeth away on a four-month trip to South Africa. ‘I knew the separation would change nothing; when Lilibet gives her love, she gives it once and for all,’ said Marion. ‘From South Africa, she wrote to him constantly. And throughout the trip, she put Philip’s photograph on her dressing table.’

There were rumours that King George VI hoped his daughter might meet other potential suitors during the trip, but royal biographer Philip Eade explains why Elizabeth remained true to her plain-spoken love, saying: ‘His forthrightness and independence were precisely the traits that had won Elizabeth’s heart, accustomed as she had been all her life to fawning deference.’

On July 9, 1947, the engagement was announced. The excited couple posed outside Buckingham Palace, and Elizabeth proudly wore the diamond and platinum engagement ring designed by her romantic fiancé.