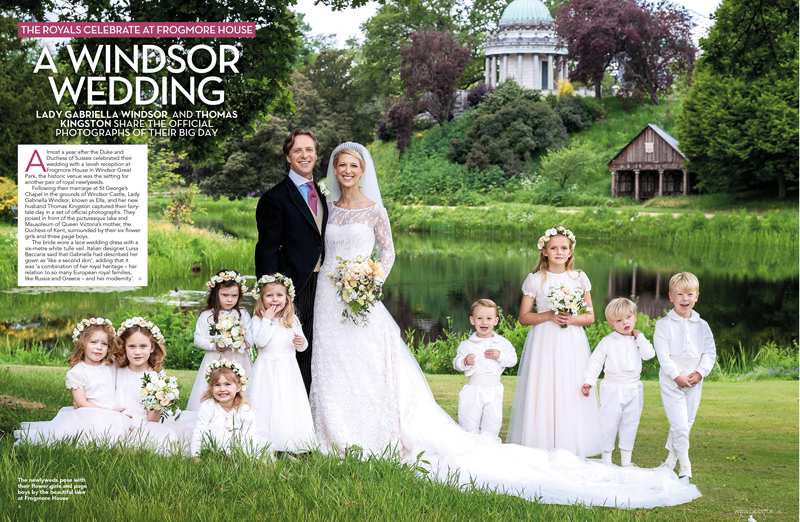 Lady Gabriella’s wedding was a royal affair with the reception held in the grounds of Frogmore House a year after Harry and Meghan celebrated their nuptials with an ‘after-party’ at the same venue. This is my report for OK! magazine. 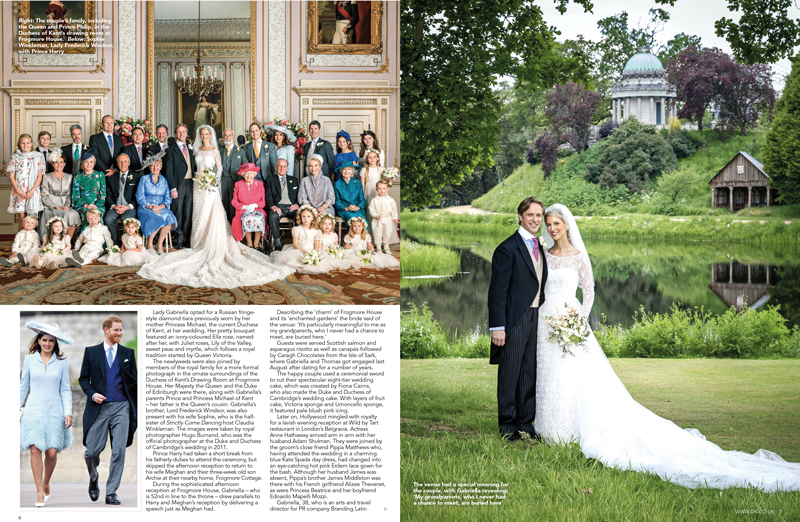 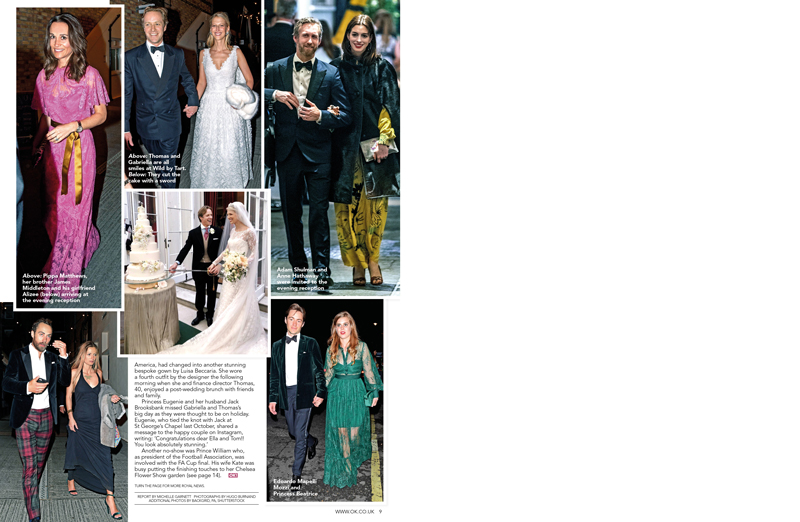 Almost a year after the Duke and Duchess of Sussex celebrated their wedding with a lavish reception at Frogmore House in Windsor Great Park, the historic venue was the setting for another pair of royal newlyweds. Following their marriage at St George’s Chapel in the grounds of Windsor Castle, Lady Gabriella Windsor, known as Ella, and her new husband Thomas Kingston captured their fairytale day in a set of official photographs. They posed in front of the picturesque lake and Mausoleum of Queen Victoria’s mother, the Duchess of Kent, surrounded by their six flower girls and three page boys. The bride wore a lace wedding dress with a six-metre white tulle veil.

Italian designer Luisa Beccaria said that Gabriella had described her gown as ‘like a second skin’, adding that it was ‘a combination of her royal heritage – her relation to so many European royal families, like Russia and Greece – and her modernity’. Lady Gabriella opted for a Russian fringe-style diamond tiara previously worn by her mother Princess Michael, the current Duchess of Kent, at her wedding. Her pretty bouquet featured an ivory-coloured Ella rose, named after her, with Juliet roses, Lily of the Valley, sweet peas and myrtle, which follows a royal tradition started by Queen Victoria.

The newlyweds were also joined by members of the royal family for a more formal photograph in the ornate surroundings of the Duchess of Kent’s Drawing Room at Frogmore House. Her Majesty the Queen and the Duke of Edinburgh were there, along with Gabriella’s parents Prince and Princess Michael of Kent – her father is the Queen’s cousin. Gabriella’s brother, Lord Frederick Windsor, was also present with his wife Sophie, who is the half-sister of Strictly Come Dancing host Claudia Winkleman.

The images were taken by royal photographer Hugo Burnand, who was the official photographer at the Duke and Duchess of Cambridge’s wedding in 2011. Prince Harry had taken a short break from his fatherly duties to attend the ceremony, but skipped the afternoon reception to return to his wife Meghan and their three-week-old son Archie at their nearby home, Frogmore Cottage.

During the sophisticated afternoon reception at Frogmore House, Gabriella – who is 52nd in line to the throne – drew parallels to Harry and Meghan’s reception by delivering a speech just as Meghan had. Describing the ‘charm’ of Frogmore House and its ‘enchanted gardens’ the bride said of the venue: ‘It’s particularly meaningful to me as my grandparents, who I never had a chance to meet, are buried here.’

Guests were served Scottish salmon and asparagus risotto as well as canapés followed by Caragh Chocolates from the Isle of Sark, where Gabriella and Thomas got engaged last August after dating for a number of years. The happy couple used a ceremonial sword to cut their spectacular eight-tier wedding cake, which was created by Fiona Cairns, who also made the Duke and Duchess of Cambridge’s wedding cake. With layers of fruit cake, Victoria sponge and Limoncello sponge, it featured pale blush pink icing.

Later on, Hollywood mingled with royalty for a lavish evening reception at Wild by Tart restaurant in London’s Belgravia. Actress Anne Hathaway arrived arm in arm with her husband Adam Shulman. They were joined by the groom’s close friend Pippa Matthews who, having attended the wedding in a charming blue Kate Spade day dress, had changed into an eye-catching hot pink Erdem lace gown for the bash. Although her husband James was absent, Pippa’s brother James Middleton was there with his French girlfriend Alizee Thevenet, as were Princess Beatrice and her boyfriend Edoardo Mapelli Mozzi.

Gabriella, 38, who is an arts and travel director for PR company Branding Latin America, had changed into another stunning bespoke gown by Luisa Beccaria. She wore a fourth outfit by the designer the following morning when she and finance director Thomas, 40, enjoyed a post-wedding brunch with friends and family.

Princess Eugenie and her husband Jack Brooksbank missed Gabriella and Thomas’s big day as they were thought to be on holiday. Eugenie, who tied the knot with Jack at St George’s Chapel last October, shared a message to the happy couple on Instagram, writing: ‘Congratulations dear Ella and Tom!! You look absolutely stunning.’

Another no-show was Prince William who, as president of the Football Association, was involved with the FA Cup final. His wife Kate was busy putting the finishing touches to her Chelsea Flower Show garden.