I enjoyed writing this feature about Emma Willis, to tie in with the imminent arrival of her third child. It was a ‘cuts job’ for OK! magazine, which means that although it reads like I’ve had a chat with Emma, I’ve actually created the article from existing interviews and researched material. [BTW, Emma and Matt welcomed a baby girl in May 2016. They called her Trixie]. 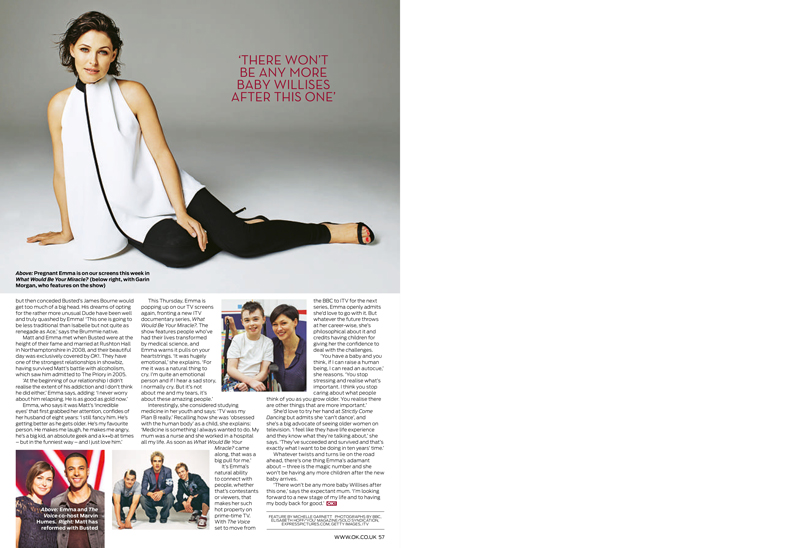 Emma Willis is the epitome of grace, class and style. Even while heavily pregnant with her third child, she appears to breeze through life in her usual unruffled, serene manner. Perhaps it’s partly thanks to her 14 years of experience coping with the frantic pace of live TV, fronting Big Brother and its celebrity spin-off since 2013, along with three seasons of The Voice UK with co-host Marvin Humes.

The former model and MTV presenter is due to give birth any day now and she and her Busted husband Matt couldn’t be more thrilled: ‘Having a baby feels like my own little miracle. Every night Matt feels the baby moving and says: “Oh my God, it’s blows my mind,”’ Emma says. There were rumours the new arrival is tipped to make its debut on Matt’s 33rd birthday – May 8 – but Emma’s keeping mum on that matter.

The couple live in leafy Hertfordshire and are already parents to daughter Isabelle, six, and four-year-old son Ace. And, without a nanny on hand, they juggle the childcare with the help of family members. But it’s a situation which is about to get seriously intense.

On May 11, most likely to be just days after the birth of baby Willis, Matt’s setting off on tour with his Busted bandmates Charlie Simpson and James Bourne. Not only that, but the next series of Big Brother will be kicking off in June, followed directly by Celebrity Big Brother. Emma is far from fazed, though. ‘I like being busy, I’m not very good at doing nothing,’ she insists, but does admit: ‘I would have liked the due date not to have fallen where it has. Not least because Matt goes on tour a week later.’

Although it’s likely that her parents will be moving in to lend a hand, the determined realist says: ‘We’re just going to crack on with it, to be honest. I really can’t wait!’

An exotic babymoon earlier this month gave the family a rare opportunity to kick back and airbrush out the memories of Emma’s tough first trimester, which coincided with The Voice auditions last autumn. ‘I felt horrific,’ Emma says. ‘I was pretty bad. The only person who knew [about her pregnancy] was my make-up artist. I was trying to have every little nap I could. After about 16 weeks I got through it.’

Given her youthful looks, it’s hard to believe that Emma turned 40 in March. ‘It’s just a number,’ she says. ‘In my body I feel like I’m still 18.’ However, the straight-talking star admits there was a point when she worried that time might be against her in the baby-making stakes. On becoming pregnant for the third time, she says: ‘I’d assumed getting pregnant was easy,’ but admits: ‘It certainly took longer than we’d hoped – there was a point when I thought, we’re too old.’ She adds: ‘Approaching 40 meant there was part of me that worried about my fertility, but my mum had my sister at 40 and, the way I see it, there is no right or wrong time to have a baby.’

Comparing her current pregnancy with her previous two, Emma says: ‘This pregnancy is harder than my last but that’s because I’m older and my body has already had two lots of wear and tear.’

Despite looking super-stylish on camera, Emma – who was signed by Models 1 at the age of 17 – paints a very different image of her off-duty look. ‘In day-to-day life I wear a baggy dress, have no make-up on and don’t do my hair,’ she says. ‘For me, comfort is key, and if I feel comfortable, I feel confident. At work I tend to dress up a bit more, I love a killer pair of heels.’ Last year, Emma credited regular HIIT (high-intensity interval training) sessions with keeping her toned and healthy, and the family went sugar-free for January.

However, she refuses to stress about losing her baby weight in time for the BB launch show. ‘I won’t put any pressure on myself or my body to bounce back to the way it was just two months after giving birth,’ says the down-to-earth presenter. ‘It’s unrealistic. It will happen when it happens.’

Of course, Isabelle and Ace are ‘beyond excited’ about the prospect of having a younger sibling in the mix, and Emma says: ‘I think Isabelle will be like a little mum.’ Whether they’ll be getting a baby brother or a baby sister is anyone’s guess, though, as Matt and Emma have decided to wait for the surprise. The bookies have had Isla and Poppy marked out as favourite names for a girl. And if it’s a boy? Matt had previously mooted the name James, but then conceded Busted’s James Bourne would get too much of a big head. His dreams of opting for the rather more unusual Dude have been well and truly quashed by Emma! ‘This one is going to be less traditional than Isabelle but not quite as renegade as Ace,’ says the Brummie native.

Matt and Emma met when Busted were at the height of their fame and married at Rushton Hall in Northamptonshire in 2008, and their beautiful day was exclusively covered by OK!. They have one of the strongest relationships in showbiz, having survived Matt’s battle with alcoholism, which saw him admitted to The Priory in 2005. ‘At the beginning of our relationship I didn’t realise the extent of his addiction and I don’t think he did either,’ Emma says, adding: ‘I never worry about him relapsing. He is as good as gold now.’

Emma, who says it was Matt’s ‘incredible eyes’ that first grabbed her attention, confides of her husband of eight years: ‘I still fancy him. He’s getting better as he gets older. He’s my favourite person. He makes me laugh, he makes me angry, he’s a big kid, an absolute geek and a k**b at times – but in the funniest way – and I just love him.’

This Thursday, Emma is popping up on our TV screens again, fronting a new ITV documentary series, What Would Be Your Miracle?. The show features people who’ve had their lives transformed by medical science, and Emma warns it pulls on your heartstrings. ‘It was hugely emotional,’ she explains. ‘For me it was a natural thing to cry. I’m quite an emotional person and if I hear a sad story, I normally cry. But it’s not about me and my tears, it’s about these amazing people.’ Interestingly, she considered studying medicine in her youth and says: ‘TV was my Plan B really.’

Recalling how she was ‘obsessed with the human body’ as a child, she explains: ‘Medicine is something I always wanted to do. My mum was a nurse and she worked in a hospital all my life. As soon as What Would Be Your Miracle? came along, that was a big pull for me.’ It’s Emma’s natural ability to connect with people, whether that’s contestants or viewers, that makes her such hot property on prime-time TV.

With The Voice set to move from the BBC to ITV for the next series, Emma openly admits she’d love to go with it. But whatever the future throws at her career-wise, she’s philosophical about it and credits having children for giving her the confidence to deal with the challenges. ‘You have a baby and you think, if I can raise a human being, I can read an autocue,’ she reasons. ‘You stop stressing and realise what’s important. I think you stop caring about what people think of you as you grow older. You realise there are other things that are more important.’

She’d love to try her hand at Strictly Come Dancing but admits she ‘can’t dance’, and she’s a big advocate of seeing older women on television. ‘I feel like they have life experience and they know what they’re talking about,’ she says. ‘They’ve succeeded and survived and that’s exactly what I want to be doing in ten years’ time.’

Whatever twists and turns lie on the road ahead, there’s one thing Emma’s adamant about – three is the magic number and she won’t be having any more children after the new baby arrives. ‘There won’t be any more baby Willises after this one,’ says the expectant mum. ‘I’m looking forward to a new stage of my life and to having my body back for good.’