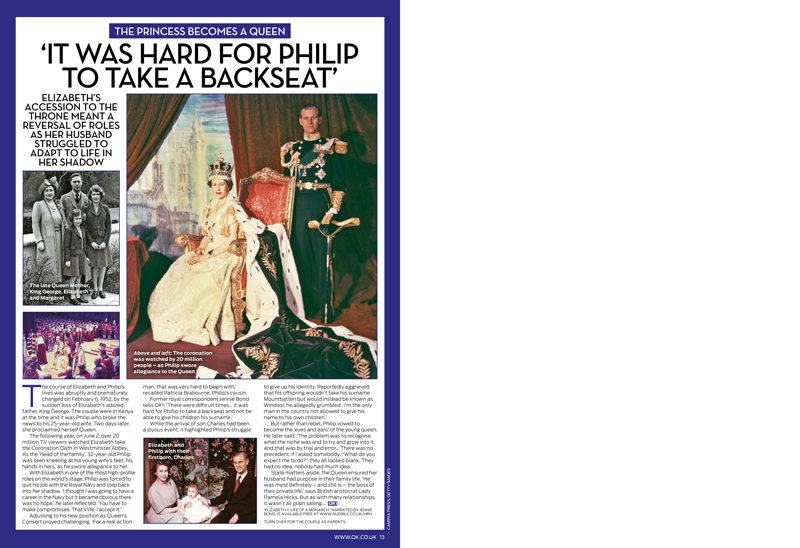 When Princess Elizabeth, as she was then known, took the throne, her young husband Philip had to make some major sacrifices, as my feature for OK! magazine explains.

The course of Elizabeth and Philip’s lives was abruptly and prematurely changed on February 6, 1952, by the sudden loss of Elizabeth’s adored father, King George. The couple were in Kenya at the time and it was Philip who broke the news to his 25-year-old wife. Two days later, she proclaimed herself Queen.

The following year, on June 2, over 20 million TV viewers watched Elizabeth take the Coronation Oath in Westminster Abbey. As the ‘head of the family’, 32-year-old Philip was seen kneeling at his young wife’s feet, his hands in hers, as he swore allegiance to her.

With Elizabeth in one of the most high-profile roles on the world’s stage, Philip was forced to quit his job with the Royal Navy and step back into her shadow. ‘I thought I was going to have a career in the Navy but it became obvious there was no hope,’ he later reflected. ‘You have to make compromises. That’s life. I accept it.’

Adjusting to his new position as Queen’s Consort proved challenging. ‘For a real action man, that was very hard to begin with,’ recalled Patricia Brabourne, Philip’s cousin.

Former royal correspondent Jennie Bond tells OK!: ‘There were difficult times… it was hard for Phillip to take a backseat and not be able to give his children his surname.’

While the arrival of son Charles had been a joyous event, it highlighted Philip’s struggle to give up his identity. Reportedly aggrieved that his offspring wouldn’t take his surname Mountbatten but would instead be known as Windsor, he allegedly grumbled: ‘I’m the only man in the country not allowed to give his name to his own children.’

But rather than rebel, Philip vowed to become the ‘eyes and ears’ of the young queen. He later said: ‘The problem was to recognise what the niche was and to try and grow into it and that was by trial and error… There was no precedent. If I asked somebody: “What do you expect me to do?” they all looked blank. They had no idea, nobody had much idea.’

State matters aside, the Queen ensured her husband had purpose in their family life. ‘He was most definitely – and still is – the boss of their private life,’ says British aristocrat Lady Pamela Hicks. But as with many relationships it wasn’t all plain sailing…