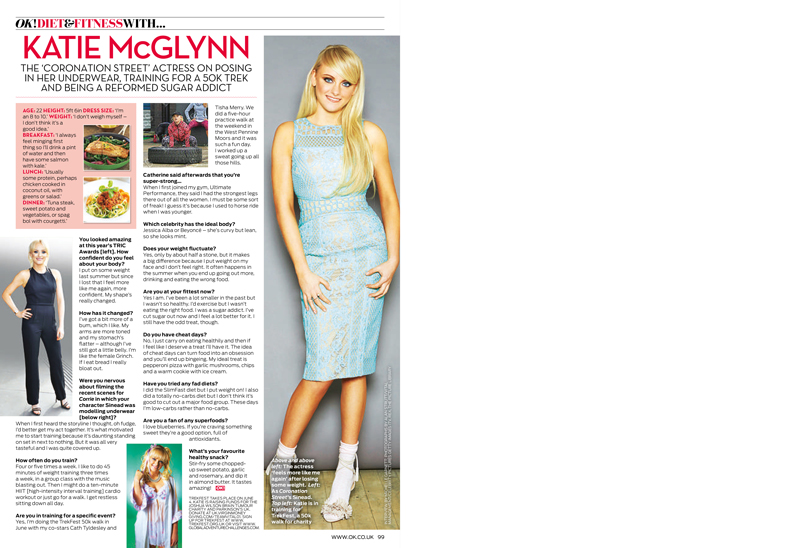 The ‘Coronation Street’ actress on posing in her underwear, training for a 50k Trek and being a reformed sugar addict…

You looked amazing at this year’s TRIC Awards. How confident do you feel about your body? I put on some weight last summer but since I lost that I feel more like me again, more confident. my shape’s really changed.

How has it changed? I’ve got a bit more of a bum, which I like. my arms are more toned and my stomach’s flatter – although I’ve still got a little belly. I’m like the female Grinch. If I eat bread I really bloat out.

Were you nervous about filming the recent scenes for Corrie in which your character Sinead was modelling underwear? When I first heard the storyline I thought, oh fudge, I’d better get my act together. It’s what motivated me to start training because it’s daunting standing on set in next to nothing. But it was all very tasteful and I was quite covered up.

How often do you train? Four or five times a week. I like to do 45 minutes of weight training three times a week, in a group class with the music blasting out. Then I might do a ten-minute HIIT [high-intensity interval training] cardio workout or just go for a walk. I get restless sitting down all day.

Are you in training for a specific event? Yes, I’m doing the TrekFest 50k walk in June with my co-stars Cath Tyldesley and Tisha Merry. We did a five-hour practice walk at the weekend in the West Pennine Moors and it was such a fun day. I worked up a sweat going up all those hills. Catherine said afterwards that you’re super-strong… When I first joined my gym, Ultimate Performance, they said I had the strongest legs there out of all the women. I must be some sort of freak! I guess it’s because I used to horse ride when I was younger.

Which celebrity has the ideal body? Jessica Alba or Beyoncé – she’s curvy but lean, so she looks mint.

Does your weight fluctuate? Yes, only by about half a stone, but it makes a big difference because I put weight on my face and I don’t feel right. It often happens in the summer when you end up going out more, drinking and eating the wrong food.

Are you at your fittest now? Yes I am. I’ve been a lot smaller in the past but I wasn’t so healthy. I’d exercise but I wasn’t eating the right food. I was a sugar addict. I’ve cut sugar out now and I feel a lot better for it. I still have the odd treat, though.

Do you have cheat days? No, I just carry on eating healthily and then if I feel like I deserve a treat I’ll have it. The idea of cheat days can turn food into an obsession and you’ll end up bingeing. My ideal treat is pepperoni pizza with garlic mushrooms, chips and a warm cookie with ice cream.

Have you tried any fad diets? I did the SlimFast diet but I put weight on! I also did a totally no-carbs diet but I don’t think it’s good to cut out a major food group. These days I’m low-carbs rather than no-carbs.

Are you a fan of any superfoods? I love blueberries. If you’re craving something sweet they’re a good option, full of antioxidants.

What’s your favourite healthy snack? Stir-fry some chopped-up sweet potato, garlic and rosemary, and dip it in almond butter. It tastes amazing!

Breakfast: ‘I always feel minging first thing so I’ll drink a pint of water and then have some salmon with kale.’