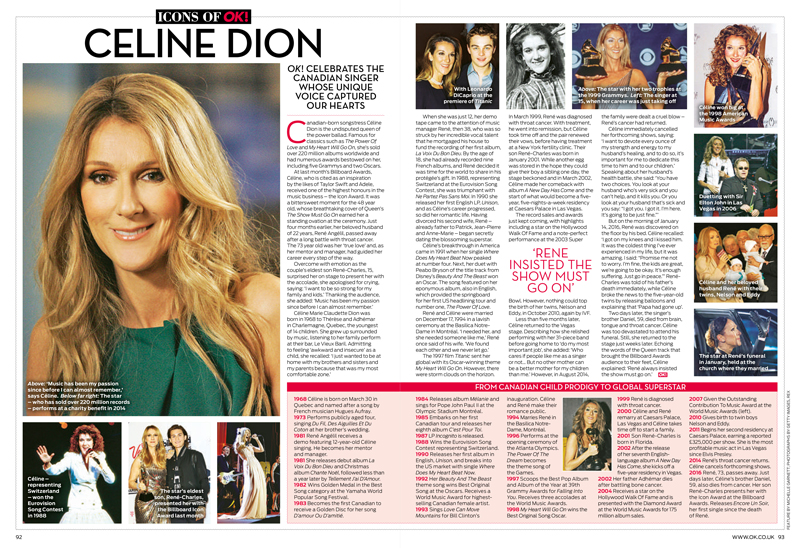 In this 2016 feature for OK! magazine I celebrated the life and career of Celine Dion, winner of Billboard’s prestigious Icon Award.

Canadian-born songstress Céline Dion is the undisputed queen of the power ballad. Famous for classics such as The Power Of Love and My Heart Will Go On, she’s sold over 220 million albums worldwide and had numerous awards bestowed on her, including five Grammys and two Oscars.

At last month’s Billboard Awards, Céline, who is cited as an inspiration by the likes of Taylor Swift and Adele, received one of the highest honours in the music business – the Icon Award. It was a bittersweet moment for the 48 year old, whose breathtaking cover of Queen’s The Show Must Go On earned her a standing ovation at the ceremony. Just four months earlier, her beloved husband of 22 years, René Angélil, passed away after a long battle with throat cancer. The 73 year old was her ‘true love’ and, as her mentor and manager, had guided her career every step of the way.

Overcome with emotion as the couple’s eldest son René-Charles, 15, surprised her on stage to present her with the accolade, she apologised for crying, saying: ‘I want to be so strong for my family and kids.’ Thanking the audience, she added: ‘Music has been my passion since before I can almost remember.’ Céline Marie Claudette Dion was born in 1968 to Thérèse and Adhémar in Charlemagne, Quebec, the youngest of 14 children. She grew up surrounded by music, listening to her family perform at their bar, Le Vieux Baril. Admitting to feeling ‘awkward and insecure’ as a child, she recalled: ‘I just wanted to be at home with my brothers and sisters and my parents because that was my most comfortable zone.’

When she was just 12, her demo tape came to the attention of music manager René, then 38, who was so struck by her incredible vocal talent that he mortgaged his house to fund the recording of her first album, La Voix Du Bon Dieu. By the age of 18, she had already recorded nine French albums, and René decided it was time for the world to share in his protégée’s gift. In 1988, representing Switzerland at the Eurovision Song Contest, she was triumphant with Ne Partez Pas Sans Moi. In 1990 she released her first English LP, Unison, and as Céline’s career progressed, so did her romantic life. Having divorced his second wife, René – already father to Patrick, Jean-Pierre and Anne-Marie – began secretly dating the blossoming superstar.

Céline’s breakthrough in America came in 1991 when her single Where Does My Heart Beat Now peaked at number four. Next, her duet with Peabo Bryson of the title track from Disney’s Beauty And The Beast won an Oscar. The song featured on her eponymous album, also in English, which provided the springboard for her first US headlining tour and number one, The Power Of Love.

René and Céline were married on December 17, 1994 in a lavish ceremony at the Basilica Notre- Dame in Montréal. ‘I needed her, and she needed someone like me,’ René once said of his wife. ‘We found each other and we never let go.’

The 1997 film Titanic sent her global with its Oscar-winning theme My Heart Will Go On. However, there were storm clouds on the horizon. In March 1999, René was diagnosed with throat cancer. With treatment, he went into remission, but Céline took time off and the pair renewed their vows, before having treatment at a New York fertility clinic. Their son René-Charles was born in January 2001. While another egg was stored in the hope they could give their boy a sibling one day, the stage beckoned and in March 2002, Céline made her comeback with album A New Day Has Come and the start of what would become a five-year, five-nights-a-week residency at Caesars Palace in Las Vegas.

The record sales and awards just kept coming, with highlights including a star on the Hollywood Walk Of Fame and a note-perfect performance at the 2003 Super Bowl. However, nothing could top the birth of her twins, Nelson and Eddy, in October 2010, again by IVF.

Less than five months later, Céline returned to the Vegas stage. Describing how she relished performing with her 31-piece band before going home to ‘do my most important job’, she added: ‘Who cares if people like me as a singer or not… But no other mother can be a better mother for my children than me.’ However, in August 2014, the family were dealt a cruel blow – René’s cancer had returned.

Céline immediately cancelled her forthcoming shows, saying: ‘I want to devote every ounce of my strength and energy to my husband’s healing, and to do so, it’s important for me to dedicate this time to him and to our children.’ Speaking about her husband’s health battle, she said: ‘You have two choices. You look at your husband who’s very sick and you can’t help, and it kills you. Or you look at your husband that’s sick and you say: “I got you. I got it. I’m here. It’s going to be just fine.”’

But on the morning of January 14, 2016, René was discovered on the floor by his bed. Céline recalled: ‘I got on my knees and I kissed him. It was the coldest thing I’ve ever experienced in my life, but it was amazing. I said: “Promise me not to worry. I’m fine, the kids are great, we’re going to be okay. It’s enough suffering. Just go in peace.”’ René-Charles was told of his father’s death immediately, while Céline broke the news to the five-year-old twins by releasing balloons and explaining that ‘Papa had gone up’.

Two days later, the singer’s brother Daniel, 59, died from brain, tongue and throat cancer. Céline was too devastated to attend his funeral. Still, she returned to the stage just weeks later. Echoing the words of the Queen track that brought the Billboard Awards audience to their feet, Céline explained: ‘René always insisted the show must go on.’