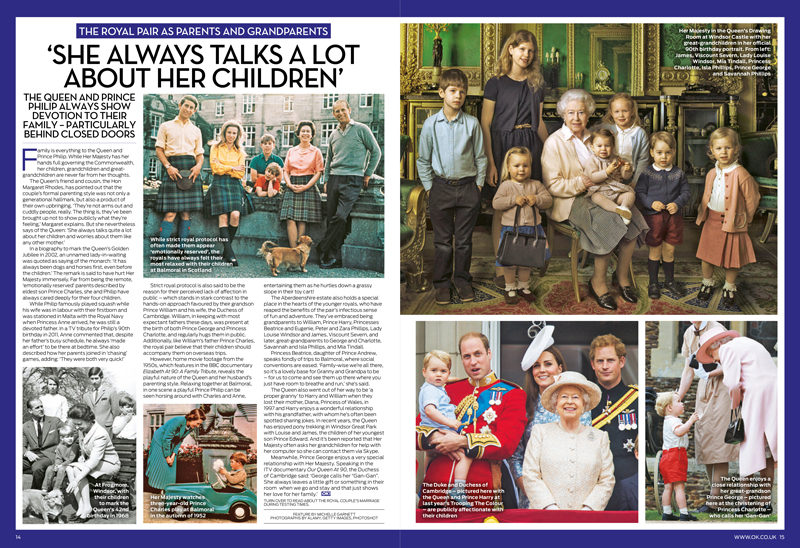 My feature for OK! magazine’s tribute issue to mark our monarch’s 69th wedding anniversary issue uncovered the maternal side of HM the Queen.

Family is everything to the Queen and Prince Philip. While Her Majesty has her hands full governing the Commonwealth, her children, grandchildren and great-grandchildren are never far from her thoughts.

The Queen’s friend and cousin, the Hon Margaret Rhodes, has pointed out that the couple’s formal parenting style was not only a generational hallmark, but also a product of their own upbringing. ‘They’re not arms out and cuddly people, really. The thing is, they’ve been brought up not to show publicly what they’re feeling,’ Margaret explains. But she nevertheless says of the Queen: ‘She always talks quite a lot about her children and worries about them like any other mother.’

In a biography to mark the Queen’s Golden Jubilee in 2002, an unnamed lady-in-waiting was quoted as saying of the monarch: ‘It has always been dogs and horses first, even before the children.’ The remark is said to have hurt Her Majesty immensely. Far from being the remote, ‘emotionally reserved’ parents described by eldest son Prince Charles, she and Philip have always cared deeply for their four children.

While Philip famously played squash while his wife was in labour with their firstborn and was stationed in Malta with the Royal Navy when Princess Anne arrived, he was still a devoted father. In a TV tribute for Philip’s 90th birthday in 2011, Anne commented that, despite her father’s busy schedule, he always ‘made an effort’ to be there at bedtime. She also described how her parents joined in ‘chasing’ games, adding: ‘They were both very quick!’

Strict royal protocol is also said to be the reason for their perceived lack of affection in public – which stands in stark contrast to the hands-on approach favoured by their grandson Prince William and his wife, the Duchess of Cambridge. William, in keeping with most expectant fathers these days, was present at the birth of both Prince George and Princess Charlotte, and regularly hugs them in public. Additionally, like William’s father Prince Charles, the royal pair believe that their children should accompany them on overseas trips.

However, home movie footage from the 1950s, which features in the BBC documentary Elizabeth At 90: A Family Tribute, reveals the playful nature of the Queen and her husband’s parenting style. Relaxing together at Balmoral, in one scene a playful Prince Philip can be seen horsing around with Charles and Anne, entertaining them as he hurtles down a grassy slope in their toy cart!

The Aberdeenshire estate also holds a special place in the hearts of the younger royals, who have reaped the benefits of the pair’s infectious sense of fun and adventure. They’ve embraced being grandparents to William, Prince Harry, Princesses Beatrice and Eugenie, Peter and Zara Phillips, Lady Louise Windsor and James, Viscount Severn, and later, great-grandparents to George and Charlotte, Savannah and Isla Phillips, and Mia Tindall.

Princess Beatrice, daughter of Prince Andrew, speaks fondly of trips to Balmoral, where social conventions are eased. ‘Family-wise we’re all there, so it’s a lovely base for Granny and Grandpa to be – for us to come and see them up there where you just have room to breathe and run,’ she’s said.

The Queen also went out of her way to be ‘a proper granny’ to Harry and William when they lost their mother, Diana, Princess of Wales, in 1997 and Harry enjoys a wonderful relationship with his grandfather, with whom he’s often been spotted sharing jokes. In recent years, the Queen has enjoyed pony trekking in Windsor Great Park with Louise and James, the children of her youngest son Prince Edward. And it’s been reported that Her Majesty often asks her grandchildren for help with her computer so she can contact them via Skype.

Meanwhile, Prince George enjoys a very special relationship with Her Majesty. Speaking in the ITV documentary Our Queen At 90, the Duchess of Cambridge said: ‘George calls her “Gan-Gan”. She always leaves a little gift or something in their room when we go and stay and that just shows her love for her family.’