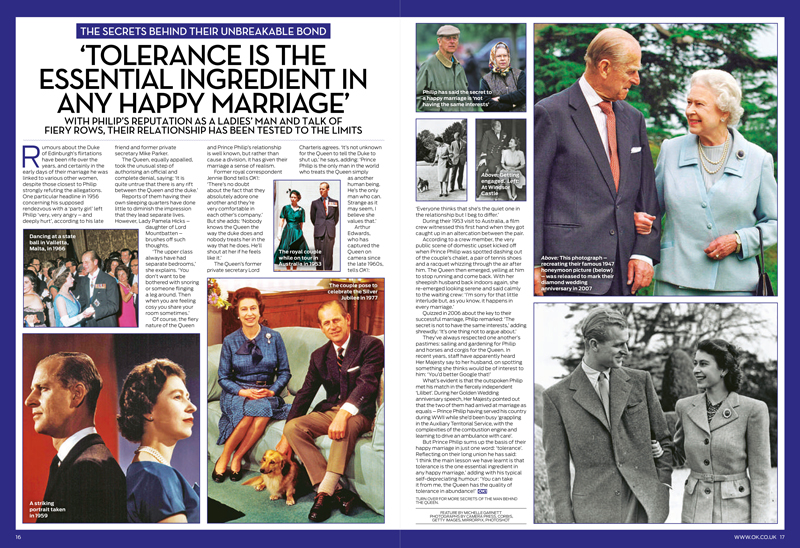 With Philip’s reputation as a ladies’ man and talk of fiery rows, their relationship has been tested to the limits…

Rumours about the Duke of Edinburgh’s flirtations have been rife over the years, and certainly in the early days of their marriage he was linked to various other women, despite those closest to Philip strongly refuting the allegations. One particular headline in 1956 concerning his supposed rendezvous with a ‘party girl’ left Philip ‘very, very angry – and deeply hurt’, according to his late friend and former private secretary Mike Parker.

The Queen, equally appalled, took the unusual step of authorising an official and complete denial, saying: ‘It is quite untrue that there is any rift between the Queen and the duke.’

Reports of them having their own sleeping quarters have done little to diminish the impression that they lead separate lives. However, Lady Pamela Hicks – daughter of Lord Mountbatten – brushes off such thoughts.

‘The upper class always have had separate bedrooms,’ she explains. ‘You don’t want to be bothered with snoring or someone flinging a leg around. Then when you are feeling cosy you share your room sometimes.’

Of course, the fiery nature of the Queen and Prince Philip’s relationship is well known, but rather than cause a division, it has given their marriage a sense of realism.

Former royal correspondent Jennie Bond tells OK!: ‘There’s no doubt about the fact that they absolutely adore one another and they’re very comfortable in each other’s company.’ But she adds: ‘Nobody knows the Queen the way the duke does and nobody treats her in the way that he does. He’ll shout at her if he feels like it.’

The Queen’s former private secretary Lord Charteris agrees. ‘It’s not unknown for the Queen to tell the Duke to shut up,’ he says, adding: ‘Prince Philip is the only man in the world who treats the Queen simply as another human being. He’s the only man who can. Strange as it may seem, I believe she values that.’

Arthur Edwards, who has captured the Queen on camera since the late 1960s, tells OK!: ‘Everyone thinks that she’s the quiet one in the relationship but I beg to differ.’

During their 1953 visit to Australia, a film crew witnessed this first hand when they got caught up in an altercation between the pair. According to a crew member, the very public scene of domestic upset kicked off when Prince Philip was spotted dashing out of the couple’s chalet, a pair of tennis shoes and a racquet whizzing through the air after him. The Queen then emerged, yelling at him to stop running and come back. With her sheepish husband back indoors again, she re-emerged looking serene and said calmly to the waiting crew: ‘I’m sorry for that little interlude but, as you know, it happens in every marriage.’

Quizzed in 2006 about the key to their successful marriage, Philip remarked: ‘The secret is not to have the same interests,’ adding shrewdly: ‘It’s one thing not to argue about.’

They’ve always respected one another’s pastimes: sailing and gardening for Philip and horses and corgis for the Queen. In recent years, staff have apparently heard Her Majesty say to her husband, on spotting something she thinks would be of interest to him: ‘You’d better Google that!’

What’s evident is that the outspoken Philip met his match in the fiercely independent ‘Lilibet’. During her Golden Wedding anniversary speech, Her Majesty pointed out that the two of them had arrived at marriage as equals – Prince Philip having served his country during WWII while she’d been busy ‘grappling in the Auxiliary Territorial Service, with the complexities of the combustion engine and learning to drive an ambulance with care’.

But Prince Philip sums up the basis of their happy marriage in just one word: ‘tolerance’. Reflecting on their long union he has said: ‘I think the main lesson we have learnt is that tolerance is the one essential ingredient in any happy marriage,’ adding with his typical self-depreciating humour: ‘You can take it from me, the Queen has the quality of tolerance in abundance!’