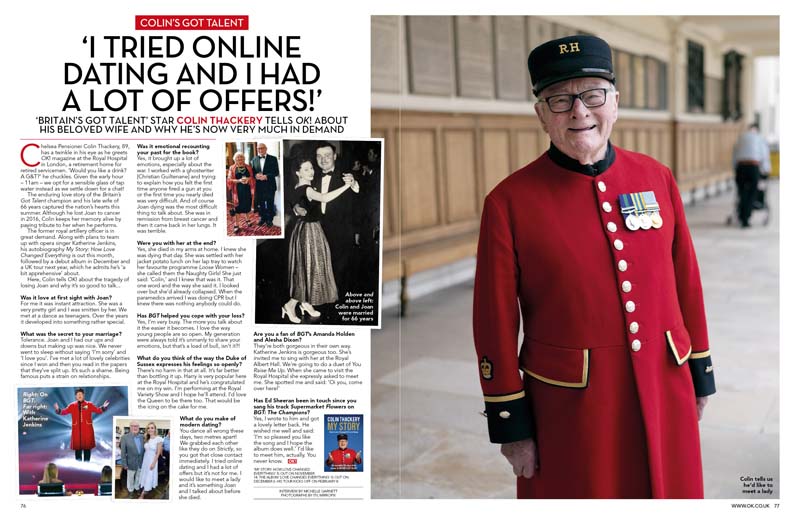 In this emotional interview, Britain’s Got Talent winner Chelsea Pensioner Colin Thackery told me the moving story of how his dear wife passed away. He also assured me that talking about his loss makes it easier to deal with – and admitted he’d like to meet a new partner one day…

Chelsea Pensioner Colin Thackery, 89, has a twinkle in his eye as he greets OK! magazine at the Royal Hospital in London, a retirement home for retired servicemen. ‘Would you like a drink? A G&T?’ he chuckles. Given the early hour – 11am – we opt for a sensible glass of tap water instead as we settle down for a chat!

The enduring love story of the Britain’s Got Talent champion and his late wife of 66 years captured the nation’s hearts this summer. Although he lost Joan to cancer in 2016, Colin keeps her memory alive by paying tribute to her when he performs.

The former royal artillery officer is in great demand. Along with plans to team up with opera singer Katherine Jenkins, his autobiography My Story: How Love Changed Everything is out this month, followed by a debut album in December and a UK tour next year, which he admits he’s ‘a bit apprehensive’ about.

Here, Colin tells OK! about the tragedy of losing Joan and why it’s so good to talk…

Was it love at first sight with Joan?  For me it was instant attraction. She was a very pretty girl and I was smitten by her. We met at a dance as teenagers. Over the years it developed into something rather special.

What was the secret to your marriage?  Tolerance. Joan and I had our ups and downs but making up was nice. We never went to sleep without saying ‘I’m sorry’ and ‘I love you’. I’ve met a lot of lovely celebrities since I won and then you read in the papers that they’ve split up. It’s such a shame. Being famous puts a strain on relationships.

Was it emotional recounting your past for the book?  Yes, it brought up a lot of emotions, especially about the war. I worked with a ghostwriter [Christian Guiltenane] and trying to explain how you felt the first time anyone fired a gun at you or the first time you nearly died was very difficult. And of course Joan dying was the most difficult thing to talk about. She was in remission from breast cancer and then it came back in her lungs. It was terrible.

Were you with her at the end?  Yes, she died in my arms at home. I knew she was dying that day. She was settled with her jacket potato lunch on her lap tray to watch her favourite programme Loose Women – she called them the Naughty Girls! She just said: ‘Colin,’ and I knew that was it. That one word and the way she said it. I looked over but she’d already collapsed. When the paramedics arrived I was doing CPR but I knew there was nothing anybody could do.

Has BGT helped you cope with your loss?  Yes, I’m very busy. The more you talk about it the easier it becomes. I love the way young people are so open. My generation were always told it’s unmanly to share your emotions, but that’s a load of bull, isn’t it?!

What do you think of the way the Duke of Sussex expresses his feelings so openly?  There’s no harm in that at all. It’s far better than bottling it up. Harry is very popular here at the Royal Hospital and he’s congratulated me on my win. I’m performing at the Royal Variety Show and I hope he’ll attend. I’d love the Queen to be there too. That would be the icing on the cake for me.

What do you make of modern dating?  You dance all wrong these days, two metres apart! We grabbed each other like they do on Strictly, so you got that close contact immediately. I tried online dating and I had a lot of offers but it’s not for me. I would like to meet a lady and it’s something Joan and I talked about before she died.

Are you a fan of BGT’s Amanda Holden and Alesha Dixon?  They’re both gorgeous in their own way. Katherine Jenkins is gorgeous too. She’s invited me to sing with her at the Royal Albert Hall. We’re going to do a duet of You Raise Me Up. When she came to visit the Royal Hospital she expressly asked to meet me. She spotted me and said: ‘Oi you, come over here!’

Has Ed Sheeran been in touch since you sang his track Supermarket Flowers on BGT: The Champions?  Yes, I wrote to him and got a lovely letter back. He wished me well and said: ‘I’m so pleased you like the song and I hope the album does well.’ I’d like to meet him, actually. You never know.