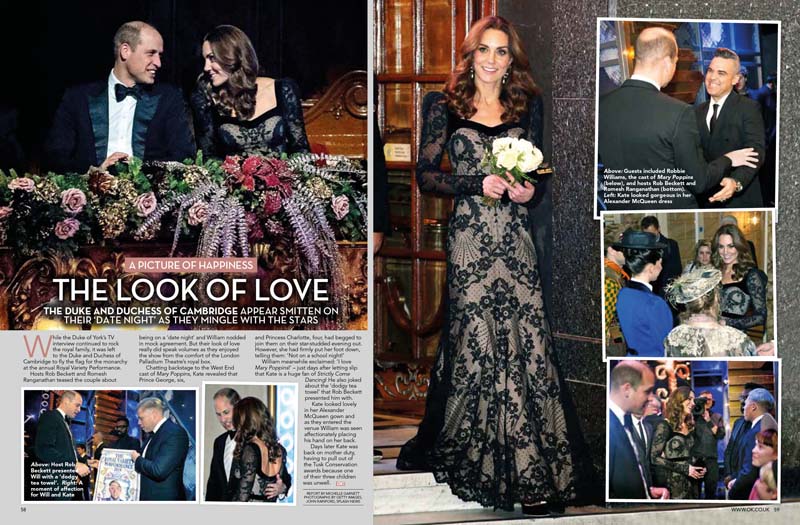 The Duke and Duchess of Cambridge looked smitten with one another at the 2019 Royal Variety Performance. Here’s all the details of their night out, including which young royals were desperate to join them…

While the Duke of York’s TV interview continued to rock the royal family, it was left to the Duke and Duchess of Cambridge to fly the flag for the monarchy at the annual Royal Variety Performance.

Hosts Rob Beckett and Romesh Ranganathan teased the couple about being on a ‘date night’ and William nodded in mock agreement. But their look of love really did speak volumes as they enjoyed the show from the comfort of the London Palladium Theatre’s royal box.

Chatting backstage to the West End cast of Mary Poppins, Kate revealed that Prince George, six, and Princess Charlotte, four, had begged to join them on their star-studded evening out.

However, she had firmly put her foot down, telling them: ‘Not on a school night!’

William meanwhile exclaimed: ‘I love Mary Poppins!’ – just days after letting slip that Kate is a huge fan of Strictly Come Dancing! He also joked about the ‘dodgy tea towel’ that Rob Beckett presented him with.

Kate looked lovely in her Alexander McQueen gown and as they entered the venue William was seen affectionately placing his hand on her back.

Days later Kate was back on mother duty, having to pull out of the Tusk Conservation awards because one of their three children was unwell.