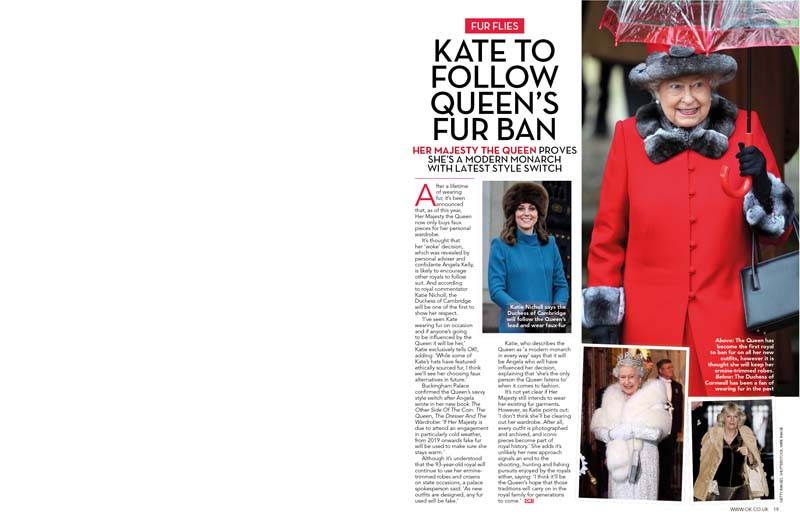 Hot on the heels of the Queen’s 2019 decision to ban real fur in her wardrobe, the Duchess of Cambridge reportedly has had plans to follow suit. Here’s my story for OK! magazine…

After a lifetime of wearing fur, it’s been announced that, as of this year, Her Majesty the Queen now only buys faux pieces for her personal wardrobe.

It’s thought that her ‘woke’ decision, which was revealed by personal adviser and confidante Angela Kelly, is likely to encourage other royals to follow suit. And according to royal commentator Katie Nicholl, the Duchess of Cambridge will be one of the first to show her respect.

‘I’ve seen Kate wearing fur on occasion and if anyone’s going to be influenced by the Queen it will be her,’ Katie exclusively tells OK!, adding: ‘While some of Kate’s hats have featured ethically sourced fur, I think we’ll see her choosing faux alternatives in future.’

Buckingham Palace confirmed the Queen’s savvy style switch after Angela wrote in her new book The Other Side Of The Coin: The Queen, The Dresser And The Wardrobe: ‘If Her Majesty is due to attend an engagement in particularly cold weather, from 2019 onwards fake fur will be used to make sure she stays warm.’

Although it’s understood that the 93-year-old royal will continue to use her ermine-trimmed robes and crowns on state occasions, a palace spokesperson said: ‘As new outfits are designed, any fur used will be fake.’

Katie, who describes the Queen as ‘a modern monarch in every way’ says that it will be Angela who will have influenced her decision, explaining that ‘she’s the only person the Queen listens to’ when it comes to fashion.

It’s not yet clear if Her Majesty still intends to wear her existing fur garments. However, as Katie points out: ‘I don’t think she’ll be clearing out her wardrobe. After all, every outfit is photographed and archived, and iconic pieces become part of royal history.’ She adds it’s unlikely her new approach signals an end to the shooting, hunting and fishing pursuits enjoyed by the royals either, saying: ‘I think it’ll be the Queen’s hope that those traditions will carry on in the royal family for generations to come.’