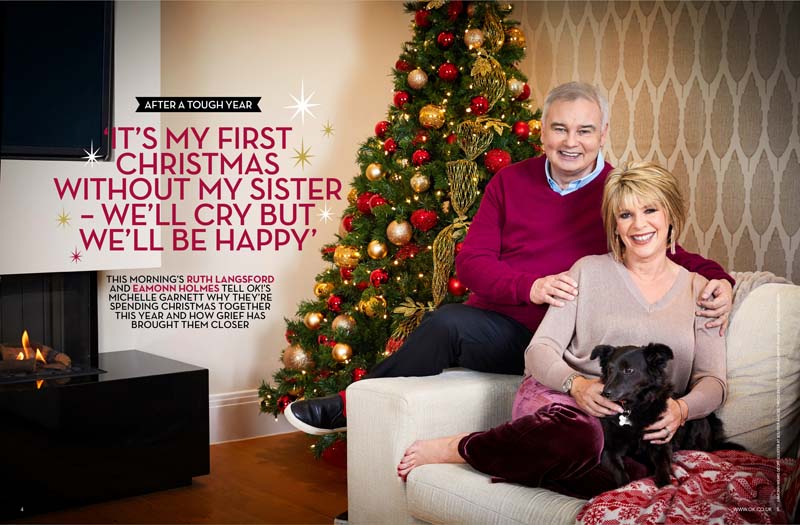 TV husband and wife Eamonn Holmes and Ruth Langsford invited me into their gorgeous Surrey home as they prepped for Christmas. Despite looking forward to spending the holidays together, the festivities were set to be tinged with sadness after the loss of Ruth’s sister Julia earlier that year. In my interview for OK! magazine – during which the This Morning couple laughed, bitched and shed a tear – they spoke of their love for Julia, how the events during the awful night of her sudden death unfolded and why their relationship has gone from strength to strength over 20+ years.

By the way, the photos of their home are fabulous – with three Christmas trees, and their rescue dog Maggie, taking pride of place! 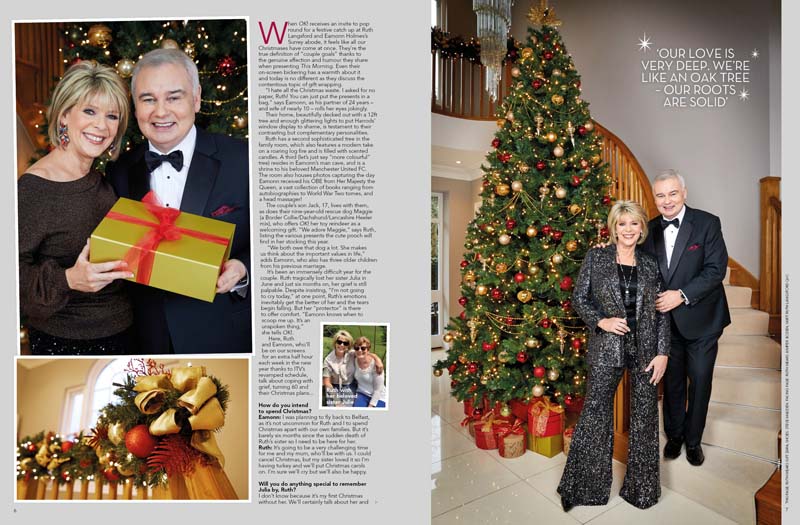 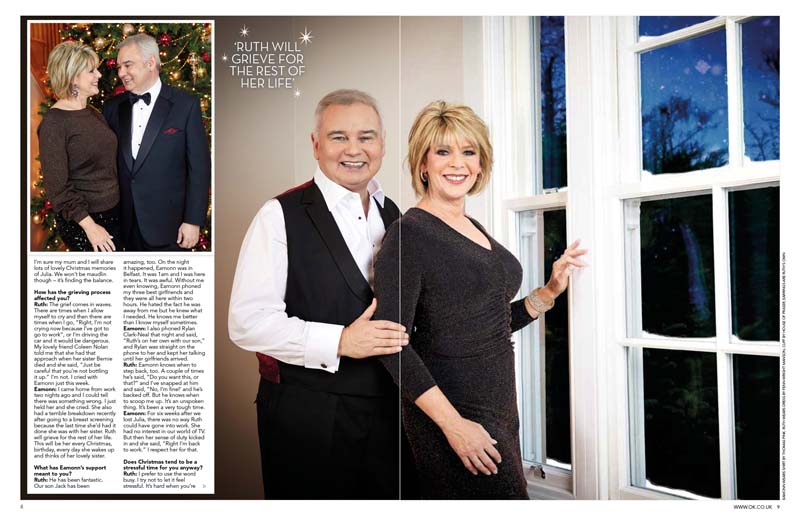 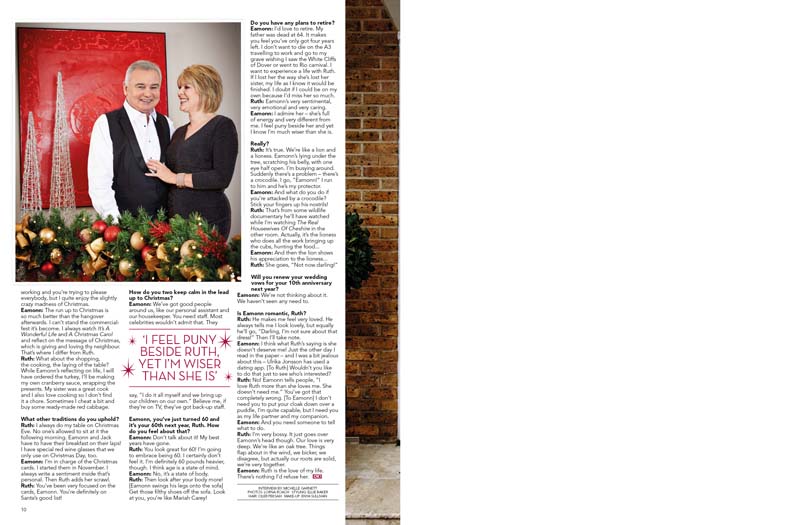 When OK! receives an invite to pop round for a festive catch up at Ruth Langsford and Eamonn Holmes’s Surrey abode, it feels like all our Christmases have come at once. They’re the true definition of “couple goals” thanks to the genuine affection and humour they share when presenting This Morning. Even their on-screen bickering has a warmth about it and today is no different as they discuss the contentious topic of gift wrapping.

“I hate all the Christmas waste. I asked for no paper, Ruth! You can just put the presents in a bag,” says Eamonn, as his partner of 24 years – and wife of nearly 10 – rolls her eyes jokingly.

Their home, beautifully decked out with a 12ft tree and enough glittering lights to put Harrods’ window display to shame, is testament to their contrasting but complementary personalities.

Ruth has a second sophisticated tree in the family room, which also features a modern take on a roaring log fire and is filled with scented candles. A third (let’s just say “more colourful” tree) resides in Eamonn’s man cave, and is a shrine to his beloved Manchester United FC.

The room also houses photos capturing the day Eamonn received his OBE from Her Majesty the Queen, a vast collection of books ranging from autobiographies to World War Two tomes, and a head massager!

The couple’s son Jack, 17, lives with them, as does their nine-year-old rescue dog Maggie (a Border Collie/Dachshund/Lancashire Heeler mix), who offers OK! her toy reindeer as a welcoming gift. “We adore Maggie,” says Ruth, listing the various presents the cute pooch will find in her stocking this year.

“We both owe that dog a lot. She makes us think about the important values in life,” adds Eamonn, who also has three older children from his previous marriage.

It’s been an immensely difficult year for the couple. Ruth tragically lost her sister Julia in June and just six months on, her grief is still palpable. Despite insisting, “I’m not going to cry today,” at one point, Ruth’s emotions inevitably get the better of her and the tears begin falling. But her “protector” is there to offer comfort. “Eamonn knows when to scoop me up. It’s an unspoken thing,” she tells OK!.

Here, Ruth and Eamonn, who’ll be on our screens for an extra half hour each week in the new year thanks to ITV’s revamped schedule, talk about coping with grief, turning 60 and their Christmas plans…

How do you intend to spend Christmas?

Eamonn: I was planning to fly back to Belfast, as it’s not uncommon for Ruth and I to spend Christmas apart with our own families. But it’s barely six months since the sudden death of Ruth’s sister so I need to be here for her.

Ruth: It’s going to be a very challenging time for me and my mum, who’ll be with us. I could cancel Christmas, but my sister loved it so I’m having turkey and we’ll put Christmas carols on. I’m sure we’ll cry but we’ll also be happy.

Will you do anything special to remember Julia by, Ruth?

I don’t know because it’s my first Christmas without her. We’ll certainly talk about her and I’m sure my mum and I will share lots of lovely Christmas memories of Julia. We won’t be maudlin though – it’s finding the balance.

How has the grieving process affected you?

Ruth: The grief comes in waves. There are times when I allow myself to cry and then there are times when I go, “Right, I’m not crying now because I’ve got to go to work”, or I’m driving the car and it would be dangerous. My lovely friend Coleen Nolan told me that she had that approach when her sister Bernie died and she said, “Just be careful that you’re not bottling it up.” I’m not. I cried with Eamonn just this week.

Eamonn: I came home from work two nights ago and I could tell there was something wrong. I just held her and she cried. She also had a terrible breakdown recently after going to a breast screening because the last time she’d had it done she was with her sister. Ruth will grieve for the rest of her life. This will be her every Christmas, birthday, every day she wakes up and thinks of her lovely sister.

What has Eamonn’s support meant to you?

Ruth: He has been fantastic. Our son Jack has been amazing, too. On the night it happened, Eamonn was in Belfast. It was 1am and I was here in tears. It was awful. Without me even knowing, Eamonn phoned my three best girlfriends and they were all here within two hours. He hated the fact he was away from me but he knew what I needed. He knows me better than I know myself sometimes.

Eamonn: I also phoned Rylan Clark-Neal that night and said, “Ruth’s on her own with our son,” and Rylan was straight on the phone to her and kept her talking until her girlfriends arrived.

Ruth: Eamonn knows when to step back, too. A couple of times he’s said, “Do you want this, or that?” and I’ve snapped at him and said, “No, I’m fine!’ and he’s backed off. But he knows when to scoop me up. It’s an unspoken thing. It’s been a very tough time.

Eamonn: For six weeks after we lost Julia, there was no way Ruth could have gone into work. She had no interest in our world of TV. But then her sense of duty kicked in and she said, “Right I’m back to work.” I respect her for that.

Does Christmas tend to be a stressful time for you anyway?

Ruth: I prefer to use the word busy. I try not to let it feel stressful. It’s hard when you’re working and you’re trying to please everybody, but I quite enjoy the slightly crazy madness of Christmas.

Eamonn: The run up to Christmas is so much better than the hangover afterwards. I can’t stand the commercial-fest it’s become. I always watch It’s A Wonderful Life and A Christmas Carol and reflect on the message of Christmas, which is giving and loving thy neighbour. That’s where I differ from Ruth.

Ruth: What about the shopping, the cooking, the laying of the table? While Eamonn’s reflecting on life, I will have ordered the turkey, I’ll be making my own cranberry sauce, wrapping the presents. My sister was a great cook and I also love cooking so I don’t find it a chore. Sometimes I cheat a bit and buy some ready-made red cabbage.

What other traditions do you uphold?

Ruth: I always do my table on Christmas Eve. No one’s allowed to sit at it the following morning. Eamonn and Jack have to have their breakfast on their laps! I have special red wine glasses that we only use on Christmas Day, too.

Eamonn: I’m in charge of the Christmas cards. I started them in November. I always write a sentiment inside that’s personal. Then Ruth adds her scrawl.

How do you two keep calm in the lead up to Christmas?

Eamonn: We’ve got good people around us, like our personal assistant and our housekeeper. You need staff. Most celebrities wouldn’t admit that. They say, “I do it all myself and we bring up our children on our own.” Believe me, if they’re on TV, they’ve got back-up staff.

Eamonn, you’ve just turned 60 and it’s your 60th next year, Ruth. How do you feel about that?

Eamonn: Don’t talk about it! My best years have gone.

Ruth: You look great for 60! I’m going to embrace being 60. I certainly don’t feel it. I’m definitely 60 pounds heavier, though. I think age is a state of mind.

Ruth: Then look after your body more! [Eamonn swings his legs onto the sofa] Get those filthy shoes off the sofa. Look at you, you’re like Mariah Carey!

Do you have any plans to retire?

Eamonn: I’d love to retire. My father was dead at 64. It makes you feel you’ve only got four years left. I don’t want to die on the A3 travelling to work and go to my grave wishing I saw the White Cliffs of Dover or went to Rio carnival. I want to experience a life with Ruth. If I lost her the way she’s lost her sister, my life as I know it would be finished. I doubt if I could be on my own because I’d miss her so much.

Eamonn: I admire her – she’s full of energy and very different from me. I feel puny beside her and yet I know I’m much wiser than she is.

Ruth: It’s true. We’re like a lion and a lioness. Eamonn’s lying under the tree, scratching his belly, with one eye half open. I’m busying around. Suddenly there’s a problem – there’s a crocodile. I go, “Eamonn!” I run to him and he’s my protector.

Eamonn: And what do you do if you’re attacked by a crocodile? Stick your fingers up his nostrils!

Ruth: That’s from some wildlife documentary he’ll have watched while I’m watching The Real Housewives Of Cheshire in the other room. Actually, it’s the lioness who does all the work bringing up the cubs, hunting the food…

Eamonn: And then the lion shows his appreciation to the lioness…

Ruth: She goes, “Not now darling!”

Will you renew your wedding vows for your 10th anniversary next year?

Eamonn: We’re not thinking about it. We haven’t seen any need to.

Ruth: He makes me feel very loved. He always tells me I look lovely, but equally he’ll go, “Darling, I’m not sure about that dress!” Then I’ll take note.

Eamonn: I think what Ruth’s saying is she doesn’t deserve me! Just the other day I read in the paper – and I was a bit jealous about this – Ulrika Jonsson has used a dating app. [To Ruth] Wouldn’t you like to do that just to see who’s interested?

Ruth: No! Eamonn tells people, “I love Ruth more than she loves me. She doesn’t need me.” You’ve got that completely wrong. [To Eamonn] I don’t need you to put your cloak down over a puddle, I’m quite capable, but I need you as my life partner and my companion.

Eamonn: And you need someone to tell what to do.

Ruth: I’m very bossy. It just goes over Eamonn’s head though. Our love is very deep. We’re like an oak tree. Things flap about in the wind, we bicker, we disagree, but actually our roots are solid, we’re very together.

Eamonn: Ruth is the love of my life. There’s nothing I’d refuse her.