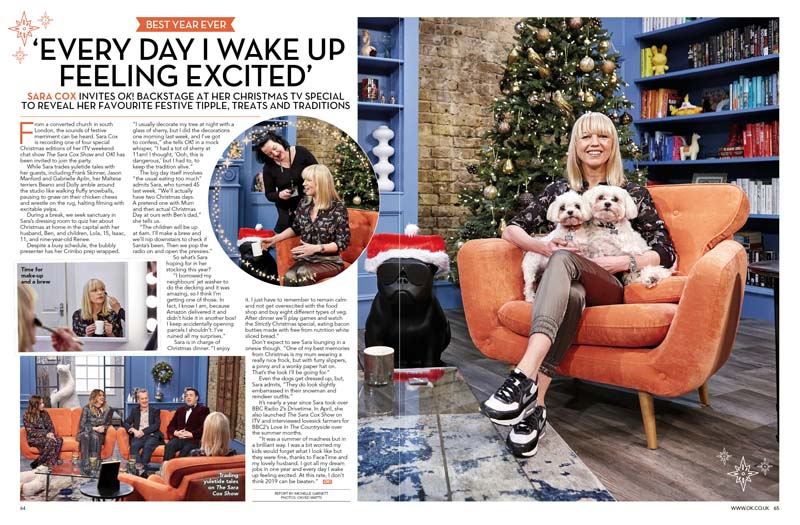 Radio 2 presenter Sara Cox invited me backstage to watch a special recording of her chat show The Sara Cox Show and we had a great catch up about her amazing year and mid-morning pre-Crimbo sherry drinking!

From a converted church in south London, the sounds of festive merriment can be heard. Sara Cox is recording one of four special Christmas editions of her ITV weekend chat show The Sara Cox Show and OK! has been invited to join the party.

While Sara trades yuletide tales with her guests, including Frank Skinner, Jason Manford and Gabrielle Aplin, her Maltese terriers Beano and Dolly amble around the studio like walking fluffy snowballs, pausing to gnaw on their chicken chews and wrestle on the rug, halting filming with excitable yelps.

During a break, we seek sanctuary in Sara’s dressing room to quiz her about Christmas at home in the capital with her husband, Ben, and children, Lola, 15, Isaac, 11, and nine-year-old Renee.

Despite a busy schedule, the bubbly presenter has her Crimbo prep wrapped. “I usually decorate my tree at night with a glass of sherry, but I did the decorations one morning last week, and I’ve got to confess,” she tells OK! in a mock whisper, “I had a tot of sherry at 11am! I thought, ‘Ooh, this is dangerous,’ but I had to, to keep the tradition alive.”

The big day itself involves “the usual eating too much” admits Sara, who turned 45 last week. “We’ll actually have two Christmas days. A pretend one with Mum and then actual Christmas Day at ours with Ben’s dad,” she tells us. “The children will be up at 6am. I’ll make a brew and we’ll nip downstairs to check if Santa’s been. Then we pop the radio on and open the pressies.”

So what’s Sara hoping for in her stocking this year? “I borrowed my neighbours’ jet washer to do the decking and it was amazing, so I think I’m getting one of those. In fact, I know I am, because Amazon delivered it and didn’t hide it in another box! I keep accidentally opening parcels I shouldn’t. I’ve ruined all my surprises.”

Sara is in charge of Christmas dinner. “I enjoy it. I just have to remember to remain calm and not get overexcited with the food shop and buy eight different types of veg. After dinner we’ll play games and watch the Strictly Christmas special, eating bacon butties made with free from nutrition white sliced bread.”

Don’t expect to see Sara lounging in a onesie though. “One of my best memories from Christmas is my mum wearing a really nice frock, but with furry slippers, a pinny and a wonky paper hat on. That’s the look I’ll be going for.”

Even the dogs get dressed up, but, Sara admits, “They do look slightly embarrassed in their snowman and reindeer outfits.”

It’s nearly a year since Sara took over BBC Radio 2’s Drivetime. In April, she also launched The Sara Cox Show on ITV and interviewed lovesick farmers for BBC2’s Love In The Countryside over the summer months.

“It was a summer of madness but in a brilliant way. I was a bit worried my kids would forget what I look like but they were fine, thanks to FaceTime and my lovely husband. I got all my dream jobs in one year and every day I wake up feeling excited. At this rate, I don’t think 2019 can be beaten.”