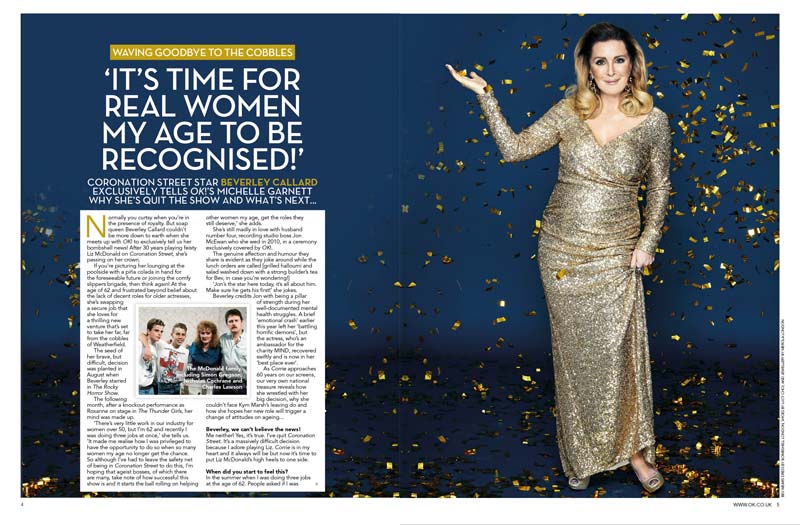 Coronation Street star Beverley Callard exclusively revealed to me that she is quitting the ITV1 soap in 2020, after 30 years, to pursue a new venture which she hopes will change ageist attitudes in the industry. She also opened up about her on-going battle with mental health which led to an ’emotional crash’ in 2019 and spoke of her devotion to loyal husband Jon. 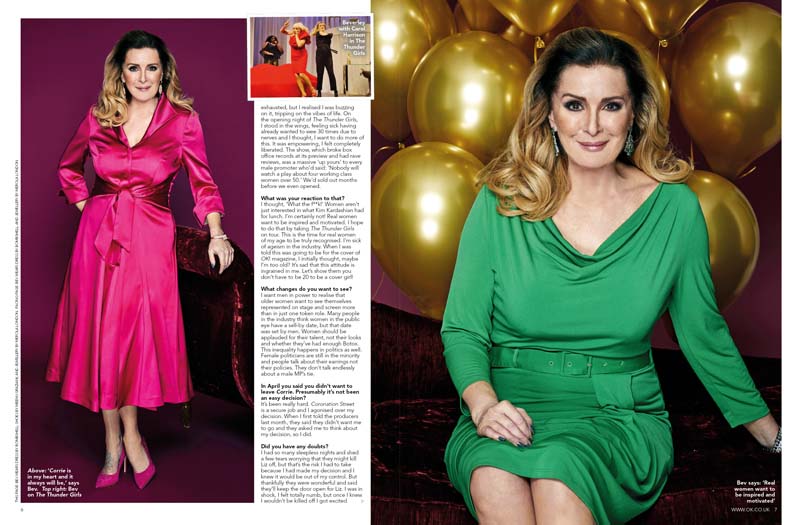 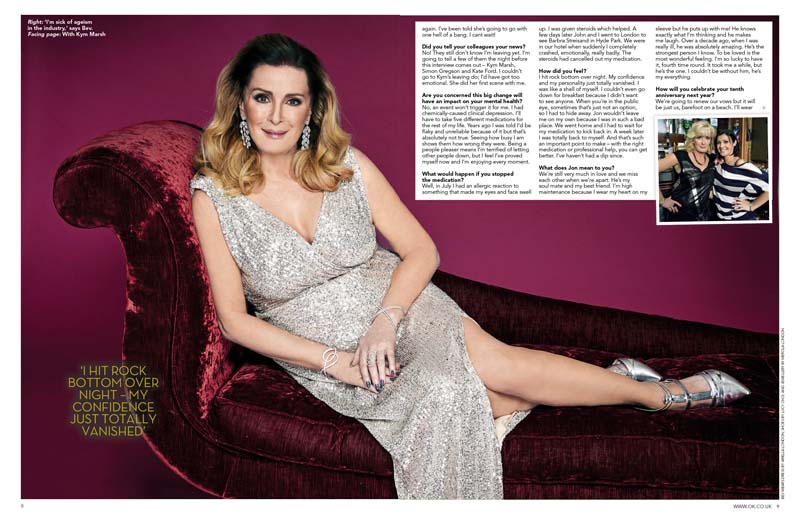 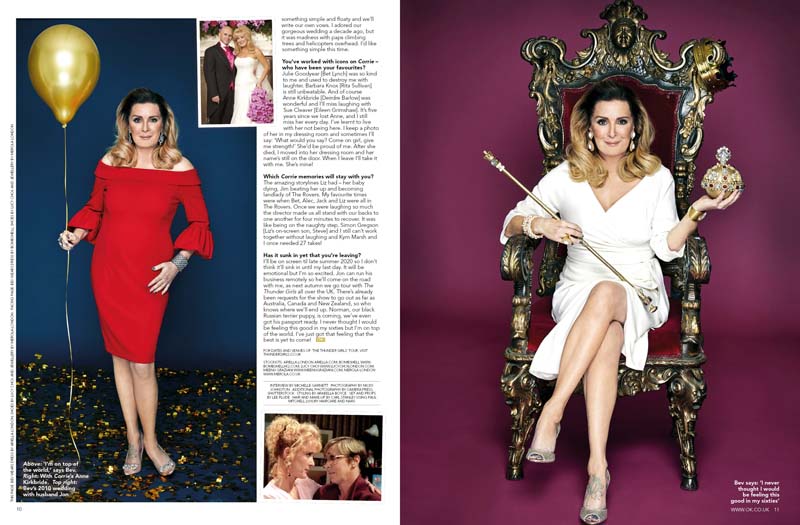 Normally you curtsy when you’re in the presence of royalty. But soap queen Beverley Callard couldn’t be more down to earth when she meets up with OK! to exclusively tell us her bombshell news! After 30 years playing feisty Liz McDonald on Coronation Street, she’s passing on her crown.

If you’re picturing her lounging at the poolside with a piña colada in hand for the foreseeable future or joining the comfy slippers brigade, then think again! At the age of 62 and frustrated beyond belief about the lack of decent roles for older actresses, she’s swapping a secure job that she loves for a thrilling new venture that’s set to take her far, far from the cobbles of Weatherfield.

The seed of her brave, but difficult, decision was planted in August when Beverley starred in The Rocky Horror Show. The following month, after a knockout performance as Roxanne on stage in The Thunder Girls, her mind was made up.

‘There’s very little work in our industry for women over 50, but I’m 62 and recently I was doing three jobs at once,’ she tells us.

‘It made me realise how I was privileged to have the opportunity to do so when so many women my age no longer get the chance. So although I’ve had to leave the safety net of being in Coronation Street to do this, I’m hoping that ageist bosses, of which there are many, take note of how successful this show is and it starts the ball rolling on helping other women my age, get the roles they still deserve,’ she adds.

She’s still madly in love with husband number four, recording studio boss Jon McEwan who she wed in 2010, in a ceremony exclusively covered by OK!. The genuine affection and humour they share is evident as they joke around while the lunch orders are called [grilled halloumi and salad washed down with a strong builder’s tea for Bev, in case you’re wondering!]

‘Jon’s the star here today, it’s all about him. Make sure he gets his first!’ she jokes.

Beverley credits Jon with being a pillar of strength during her well-documented mental health struggles. A brief ‘emotional crash’ earlier this year left her ‘battling horrific demons’, but the actress, who’s an ambassador for the charity MIND, recovered swiftly and is now in her ‘best place ever’.

As Corrie approaches 60 years on our screens, our very own national treasure reveals how she wrestled with her big decision, why she couldn’t face Kym Marsh’s leaving do and how she hopes her new role will trigger a change of attitudes on ageing…

Beverley, we can’t believe the news!  Me neither! Yes, it’s true. I’ve quit Coronation Street. It’s a massively difficult decision because I adore playing Liz. Corrie is in my heart and it always will be but now it’s time to put Liz McDonald’s high heels to one side.

When did you start to feel this?  In the summer when I was doing three jobs at the age of 62. People asked if I was exhausted, but I realised I was buzzing on it, tripping on the vibes of life. On the opening night of The Thunder Girls, I stood in the wings, feeling sick having already wanted to wee 30 times due to nerves and I thought, I want to do more of this. It was empowering, I felt completely liberated. The show, which broke box office records at its preview and had rave reviews, was a massive ‘up yours’ to every male promoter who’d said: ‘Nobody will watch a play about four working class women over 50.’ We’d sold out months before we even opened.

What was your reaction to that?  I thought, ‘What the f**k!’ Women aren’t just interested in what Kim Kardashian had for lunch. I’m certainly not! Real women want to be inspired and motivated. I hope to do that by taking The Thunder Girls on tour. This is the time for real women of my age to be truly recognised. I’m sick of ageism in the industry. When I was told this was going to be for the cover of OK! magazine, I initially thought, maybe I’m too old? It’s sad that this attitude is ingrained in me. Let’s show them you don’t have to be 20 to be a cover girl!

What changes do you want to see?  I want men in power to realise that older women want to see themselves represented on stage and screen more than in just one token role. Many people in the industry think women in the public eye have a sell-by date, but that date was set by men. Women should be applauded for their talent, not their looks and whether they’ve had enough Botox. This inequality happens in politics as well. Female politicians are still in the minority and people talk about their earrings not their policies. They don’t talk endlessly about a male MP’s tie.

In April you said you didn’t want to leave Corrie. Presumably it’s not been an easy decision?  It’s been really hard. Coronation Street is a secure job and I agonised over my decision. When I first told the producers last month, they said they didn’t want me to go and they asked me to think about my decision, so I did.

Did you have any doubts?  I had so many sleepless nights and shed a few tears worrying that they might kill Liz off, but that’s the risk I had to take because I had made my decision and I knew it would be out of my control. But thankfully they were wonderful and said they’ll keep the door open for Liz. I was in shock, I felt totally numb, but once I knew I wouldn’t be killed off I got excited again. I’ve been told she’s going to go with one hell of a bang. I cant wait!

Did you tell your colleagues your news?  No! They still don’t know I’m leaving yet. I’m going to tell a few of them the night before this interview comes out – Kym Marsh, Simon Gregson and Kate Ford. I couldn’t go to Kym’s leaving do; I’d have got too emotional. She did her first scene with me.

Are you concerned this big change will have an impact on your mental health?  No, an event won’t trigger it for me. I had chemically-caused clinical depression. I’ll have to take five different medications for the rest of my life. Years ago I was told I’d be flaky and unreliable because of it but that’s absolutely not true. Seeing how busy I am shows them how wrong they were. Being a people pleaser means I’m terrified of letting other people down, but I feel I’ve proved myself now and I’m enjoying every moment.

What would happen if you stopped the medication?  Well, in July I had an allergic reaction to something that made my eyes and face swell up. I was given steroids which helped. A few days later John and I went to London to see Barbra Streisand in Hyde Park. We were in our hotel when suddenly I completely crashed, emotionally, really badly. The steroids had cancelled out my medication.

How did you feel?  I hit rock bottom over night. My confidence and my personality just totally vanished. I was like a shell of myself. I couldn’t even go down for breakfast because I didn’t want to see anyone. When you’re in the public eye, sometimes that’s just not an option, so I had to hide away. Jon wouldn’t leave me on my own because I was in such a bad place. We went home and I had to wait for my medication to kick back in. A week later I was totally back to myself. And that’s such an important point to make – with the right medication or professional help, you can get better. I’ve haven’t had a dip since.

What does Jon mean to you?  We’re still very much in love and we miss each other when we’re apart. He’s my soul mate and my best friend. I’m high maintenance because I wear my heart on my sleeve but he puts up with me! He knows exactly what I’m thinking and he makes me laugh. Over a decade ago, when I was really ill, he was absolutely amazing. He’s the strongest person I know. To be loved is the most wonderful feeling. I’m so lucky to have it, fourth time round. It took me a while, but he’s the one. I couldn’t be without him, he’s my everything.

How will you celebrate your tenth anniversary next year?  We’re going to renew our vows but it will be just us, barefoot on a beach. I’ll wear something simple and floaty and we’ll write our own vows. I adored our gorgeous wedding a decade ago, but it was madness with paps climbing trees and helicopters overhead. I’d like something simple this time.

You’ve worked with icons on Corrie – who have been your favourites?  Julie Goodyear [Bet Lynch] was so kind to me and used to destroy me with laughter. Barbara Knox [Rita Sullivan] is still unbeatable. And of course Anne Kirkbride [Deirdre Barlow] was wonderful and I’ll miss laughing with Sue Cleaver [Eileen Grimshaw]. It’s five years since we lost Anne, and I still miss her every day. I’ve learnt to live with her not being here. I keep a photo of her in my dressing room and sometimes I’ll say: ‘What would you say? Come on girl, give me strength!’ She’d be proud of me. After she died, I moved into her dressing room and her name’s still on the door. When I leave I’ll take it with me. She’s mine!

Which Corrie memories will stay with you?  The amazing storylines Liz had – her baby dying, Jim beating her up and becoming landlady of The Rovers. My favourite times were when Bet, Alec, Jack and Liz were all in The Rovers. Once we were laughing so much the director made us all stand with our backs to one another for four minutes to recover. It was like being on the naughty step. Simon Gregson [Liz’s on-screen son, Steve] and I still can’t work together without laughing and Kym Marsh and I once needed 27 takes!

Has it sunk in yet that you’re leaving?  I’ll be on screen til late summer 2020 so I don’t think it’ll sink in until my last day. It will be emotional but I’m so excited. Jon can run his business remotely so he’ll come on the road with me, as next autumn we go tour with The Thunder Girls all over the UK. There’s already been requests for the show to go out as far as Australia, Canada and New Zealand, so who knows where we’ll end up. Norman, our black Russian terrier puppy, is coming, we’ve even got his passport ready. I never thought I would be feeling this good in my sixties but I’m on top of the world. I’ve just got that feeling that the best is yet to come!