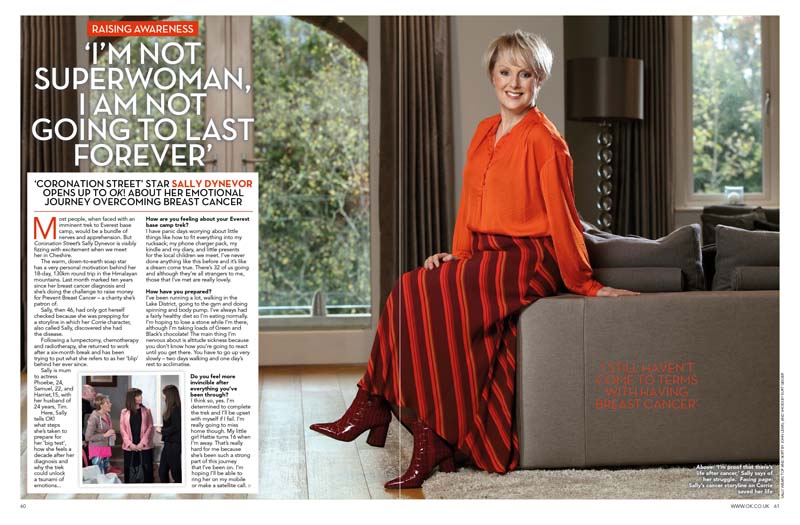 When her Coronation Street character Sally discovered she had breast cancer, actress Sally Dynevor had no idea that her own life was about to plunge into a devastating parallel universe. Ten years on from her all-clear, I met up with the soap star just before she set off on a Himalayan trek to raise money for Prevent Breast Cancer. 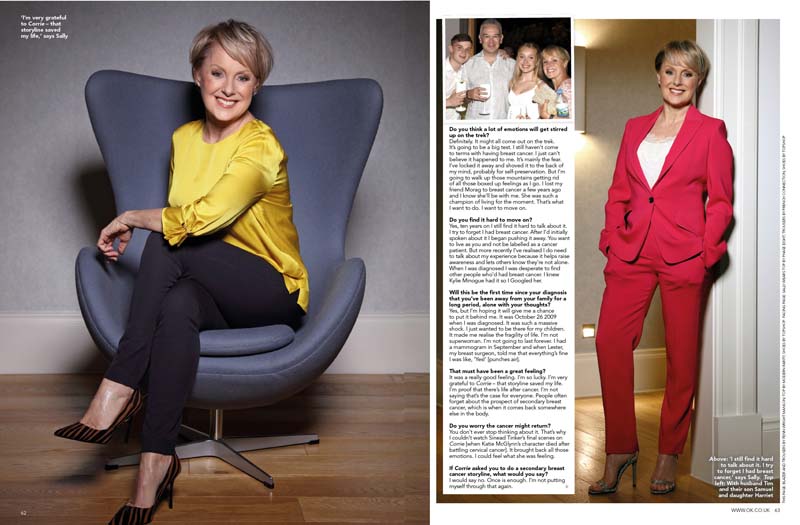 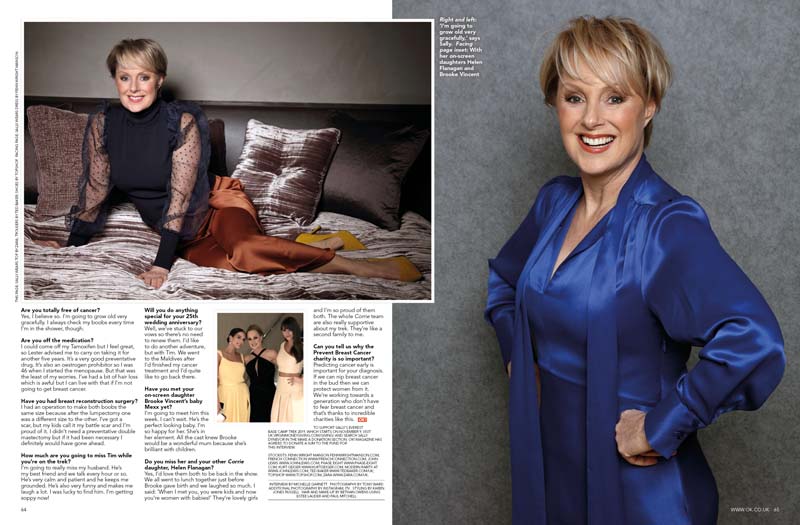 Most people, when faced with an imminent trek to Everest base camp, would be a bundle of nerves and apprehension. But Coronation Street’s Sally Dynevor is visibly fizzing with excitement when we meet her in Cheshire.

The warm, down-to-earth soap star has a very personal motivation behind her 18-day, 130km round trip in the Himalayan mountains. Last month marked ten years since her breast cancer diagnosis and she’s doing the challenge to raise money for Prevent Breast Cancer – a charity she’s patron of.

Sally, then 46, had only got herself checked because she was prepping for a storyline in which her Corrie character, also called Sally, discovered she had the disease.

Following a lumpectomy, chemotherapy and radiotherapy, she returned to work after a six-month break and has been trying to put what she refers to as her ‘blip’ behind her ever since.

Here, Sally tells OK! what steps she’s taken to prepare for her ‘big test’, how she feels a decade after her diagnosis and why the trek could unlock a tsunami of emotions…

How are you feeling about your Everest base camp trek?  I have panic days worrying about little things like how to fit everything into my rucksack; my phone charger pack, my kindle and my diary, and little presents for the local children we meet. I’ve never done anything like this before and it’s like a dream come true. There’s 32 of us going and although they’re all strangers to me, those that I’ve met are really lovely.

How have you prepared?  I’ve been running a lot, walking in the Lake District, going to the gym and doing spinning and body pump. I’ve always had a fairly healthy diet so I’m eating normally. I’m hoping to lose a stone while I’m there, although I’m taking loads of Green and Black’s chocolate! The main thing I’m nervous about is altitude sickness because you don’t know how you’re going to react until you get there. You have to go up very slowly – two days walking and one day’s rest to acclimatise.

Do you feel more invincible after everything you’ve been through?  I think so, yes. I’m determined to complete the trek and I’ll be upset with myself if I fail. I’m really going to miss home though. My little girl Hattie turns 16 when I’m away. That’s really hard for me because she’s been such a strong part of this journey that I’ve been on. I’m hoping I’ll be able to ring her on my mobile or make a satellite call.

Do you think a lot of emotions will get stirred up on the trek?  Definitely. It might all come out on the trek. It’s going to be a big test. I still haven’t come to terms with having breast cancer. I just can’t believe it happened to me. It’s mainly the fear. I’ve locked it away and shoved it to the back of my mind, probably for self-preservation. But I’m going to walk up those mountains getting rid of all those boxed up feelings as I go. I lost my friend Morag to breast cancer a few years ago and I know she’ll be with me. She was such a champion of living for the moment. That’s what I want to do. I want to move on.

Do you find it hard to move on?  Yes, ten years on I still find it hard to talk about it. I try to forget I had breast cancer. After I’d initially spoken about it I began pushing it away. You want to live as you and not be labelled as a cancer patient. But more recently I’ve realised I do need to talk about my experience because it helps raise awareness and lets others know they’re not alone. When I was diagnosed I was desperate to find other people who’d had breast cancer. I knew Kylie Minogue had it so I Googled her.

Will this be the first time since your diagnosis that you’ve been away from your family for a long period, alone with your thoughts?  Yes, but I’m hoping it will give me a chance to put it behind me. It was October 26 2009 when I was diagnosed. It was such a massive shock. I just wanted to be there for my children. It made me realise the fragility of life. I’m not superwoman. I’m not going to last forever. I had a mammogram in September and when Lester, my breast surgeon, told me that everything’s fine I was like, ‘Yes!’ [punches air].

That must have been a great feeling?  It was a really good feeling. I’m so lucky. I’m very grateful to Corrie – that storyline saved my life. I’m proof that there’s life after cancer. I’m not saying that’s the case for everyone. People often forget about the prospect of secondary breast cancer, which is when it comes back somewhere else in the body.

Do you worry the cancer might return?  You don’t ever stop thinking about it. That’s why I couldn’t watch Sinead Tinker’s final scenes on Corrie [when Katie McGlynn’s character died after battling cervical cancer]. It brought back all those emotions. I could feel what she was feeling.

If Corrie asked you to do a secondary breast cancer storyline, what would you say?  I would say no. Once is enough. I’m not putting myself through that again.

Are you totally free of cancer?  Yes, I believe so. I’m going to grow old very gracefully. I always check my boobs every time I’m in the shower, though.

Are you off the medication?  I could come off my Tamoxifen but I feel great, so Lester advised me to carry on taking it for another five years. It’s a very good preventative drug. It’s also an oestrogen prohibitor so I was 46 when I started the menopause. But that was the least of my worries. I’ve had a bit of hair loss which is awful but I can live with that if I’m not going to get breast cancer.

Have you had breast reconstruction surgery?  I had an operation to make both boobs the same size because after the lumpectomy one was a different size to the other. I’ve got a scar, but my kids call it my battle scar and I’m proud of it. I didn’t need a preventative double mastectomy but if it had been necessary I definitely would have gone ahead.

How much are you going to miss Tim while you’re on the trek?  I’m going to really miss my husband. He’s my best friend and we talk every hour or so. He’s very calm and patient and he keeps me grounded. He’s also very funny and makes me laugh a lot. I was lucky to find him. I’m getting soppy now!

Will you do anything special for your 25th wedding anniversary?  Well, we’ve stuck to our vows so there’s no need to renew them. I’d like to do another adventure, but with Tim. We went to the Maldives after I’d finished my cancer treatment and I’d quite like to go back there.

Have you met your on-screen daughter Brooke Vincent’s baby Mexx yet?  I’m going to meet him this week. I can’t wait. He’s the perfect looking baby. I’m so happy for her. She’s in her element. All the cast knew Brooke would be a wonderful mum because she’s brilliant with children.

Do you miss her and your other Corrie daughter, Helen Flanagan?  Yes, I’d love them both to be back in the show. We all went to lunch together just before Brooke gave birth and we laughed so much. I said: ‘When I met you, you were kids and now you’re women with babies!’ They’re lovely girls and I’m so proud of them both. The whole Corrie team are also really supportive about my trek. They’re like a second family to me.

Can you tell us why the Prevent Breast Cancer charity is so important?  Predicting cancer early is important for your diagnosis. If we can nip breast cancer in the bud then we can protect women from it. We’re working towards a generation who don’t have to fear breast cancer and that’s thanks to incredible charities like this.