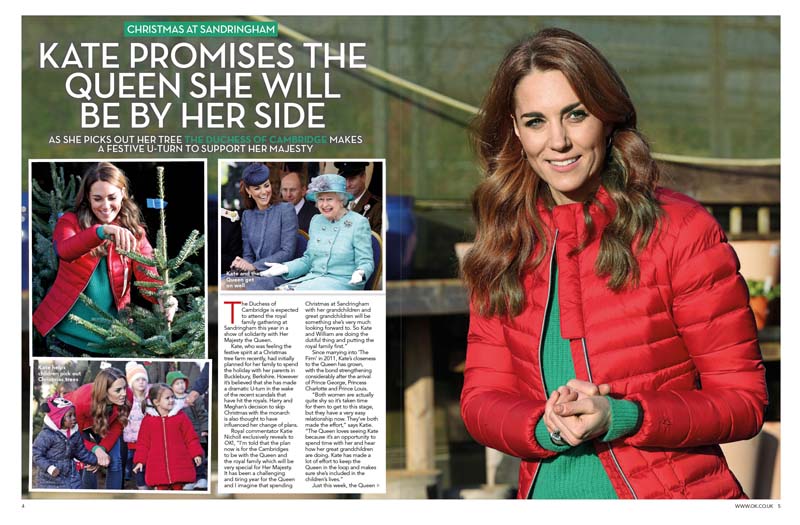 In the run up to Christmas 2019 – and on the tail of a difficult few months for the royals – the Duchess of Cambridge vowed to ‘ stand by her ma’am’ and support the Queen at the family’s traditional Christmas Day appearance in Sandringham. I spoke to royal commentator Katie Nicholl for all the details as the duchess joined excited children in her first official engagement in a new role bestowed upon her by Her Majesty. 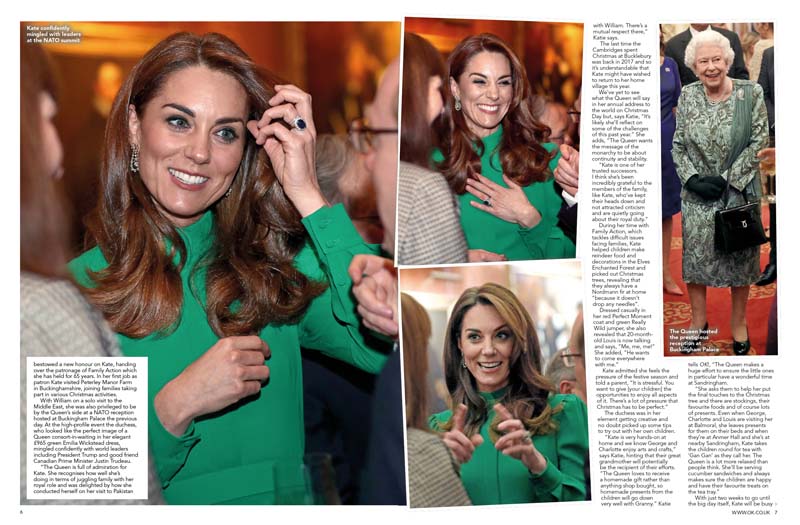 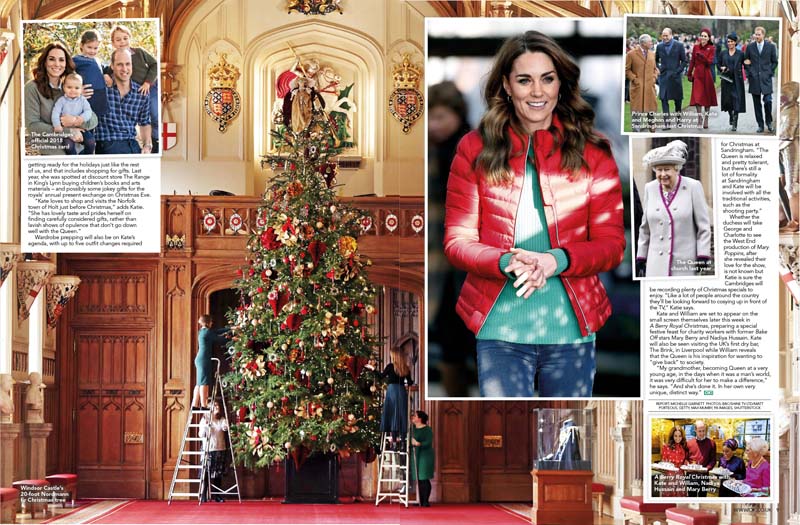 The Duchess of Cambridge is expected to attend the royal family gathering at Sandringham this year in a show of solidarity with Her Majesty the Queen.

Kate, who was feeling the festive spirit at a Christmas tree farm recently, had initially planned for her family to spend the holiday with her parents in Bucklebury, Berkshire. However it’s believed that she has made a dramatic U-turn in the wake of the recent scandals that have hit the royals. Harry and Meghan’s decision to skip Christmas with the monarch is also thought to have influenced her change of plans.

Royal commentator Katie Nicholl exclusively reveals to OK!, “I’m told that the plan now is for the Cambridges to be with the Queen and the royal family which will be very special for Her Majesty. It has been a challenging and tiring year for the Queen and I imagine that spending Christmas at Sandringham with her grandchildren and great grandchildren will be something she’s very much looking forward to. So Kate and William are doing the dutiful thing and putting the royal family first.”

Since marrying into ‘The Firm’ in 2011, Kate’s closeness to the Queen has grown, with the bond strengthening considerably after the arrival of Prince George, Princess Charlotte and Prince Louis.

“Both women are actually quite shy so it’s taken time for them to get to this stage, but they have a very easy relationship now. They’ve both made the effort,” says Katie. “The Queen loves seeing Kate because it’s an opportunity to spend time with her and hear how her great grandchildren are doing. Kate has made a lot of effort to keep the Queen in the loop and makes sure she’s included in the children’s lives.”

Just this week, the Queen bestowed a new honour on Kate, handing over the patronage of Family Action which she has held for 65 years. In her first job as patron Kate visited Peterley Manor Farm in Buckinghamshire, joining families taking part in various Christmas activities.

With William on a solo visit to the Middle East, she was also privileged to be by the Queen’s side at a NATO reception hosted at Buckingham Palace the previous day. At the high-profile event the duchess, who looked like the perfect image of a Queen consort-in-waiting in her elegant £965 green Emilia Wickstead dress, mingled confidently with world leaders including President Trump and good friend Canadian Prime Minister Justin Trudeau.

“The Queen is full of admiration for Kate. She recognises how well she’s doing in terms of juggling family with her royal role and was delighted by how she conducted herself on her visit to Pakistan with William. There’s a mutual respect there,” Katie says.

The last time the Cambridges spent Christmas at Bucklebury was back in 2017 and so it’s understandable that Kate might have wished to return to her home village this year.

We’ve yet to see what the Queen will say in her annual address to the world on Christmas Day but, says Katie, “It’s likely she’ll reflect on some of the challenges of this past year.” She adds, “The Queen wants the message of the monarchy to be about continuity and stability.

“Kate is one of her trusted successors. I think she’s been incredibly grateful to the members of the family, like Kate, who’ve kept their heads down and not attracted criticism and are quietly going about their royal duty.”

During her time with Family Action, which tackles difficult issues facing families, Kate helped children make reindeer food and decorations in the Elves Enchanted Forest and picked out Christmas trees, revealing that they always have a Nordmann fir at home “because it doesn’t drop any needles”.

Dressed casually in her red Perfect Moment coat and green Really Wild jumper, she also revealed that 20-month-old Louis is now talking and says, “Me, me, me!” She added, “He wants to come everywhere with me.”

Kate admitted she feels the pressure of the festive season and told a parent, “It is stressful. You want to give [your children] the opportunities to enjoy all aspects of it. There’s a lot of pressure that Christmas has to be perfect.”

The duchess was in her element getting creative and no doubt picked up some tips to try out with her own children.

“Kate is very hands-on at home and we know George and Charlotte enjoy arts and crafts,” says Katie, hinting that their great grandmother will potentially be the recipient of their efforts.

“The Queen loves to receive a homemade gift rather than anything shop bought, so homemade presents from the children will go down very well with Granny.” Katie tells OK!, “The Queen makes a huge effort to ensure the little ones in particular have a wonderful time at Sandringham.

“She asks them to help her put the final touches to the Christmas tree and there are stockings, their favourite foods and of course lots of presents. Even when George, Charlotte and Louis are visiting her at Balmoral, she leaves presents for them on their beds and when they’re at Anmer Hall and she’s at nearby Sandringham, Kate takes the children round for tea with ‘Gan Gan’ as they call her. The Queen is a lot more relaxed than people think. She’ll be serving cucumber sandwiches and always makes sure the children are happy and have their favourite treats on the tea tray.”

With just two weeks to go until the big day itself, Kate will be busy getting ready for the holidays just like the rest of us, and that includes shopping for gifts. Last year, she was spotted at discount store The Range in King’s Lynn buying children’s books and arts materials – and possibly some jokey gifts for the royals’ annual present exchange on Christmas Eve.

“Kate loves to shop and visits the Norfolk town of Holt just before Christmas,” adds Katie. “She has lovely taste and prides herself on finding carefully considered gifts, rather than lavish shows of opulence that don’t go down well with the Queen.”

Wardrobe prepping will also be on Kate’s agenda, with up to five outfit changes required for Christmas at Sandringham. “The Queen is relaxed and pretty tolerant, but there’s still a lot of formality at Sandringham and Kate will be involved with all the traditional activities, such as the shooting party.” Whether the duchess will take George and Charlotte to see the West End production of Mary Poppins, after she revealed their love for the show, is not known but Katie is sure the Cambridges will be recording plenty of Christmas specials to enjoy. “Like a lot of people around the country they’ll be looking forward to cosying up in front of the TV,” Katie says.

Kate and William are set to appear on the small screen themselves later this week in A Berry Royal Christmas, preparing a special festive feast for charity workers with former Bake Off stars Mary Berry and Nadiya Hussain. Kate will also be seen visiting the UK’s first dry bar, The Brink, in Liverpool while William reveals that the Queen is his inspiration for wanting to “give back” to society.

“My grandmother, becoming Queen at a very young age, in the days when it was a man’s world, it was very difficult for her to make a difference,” he says. “And she’s done it. In her own very unique, distinct way.”