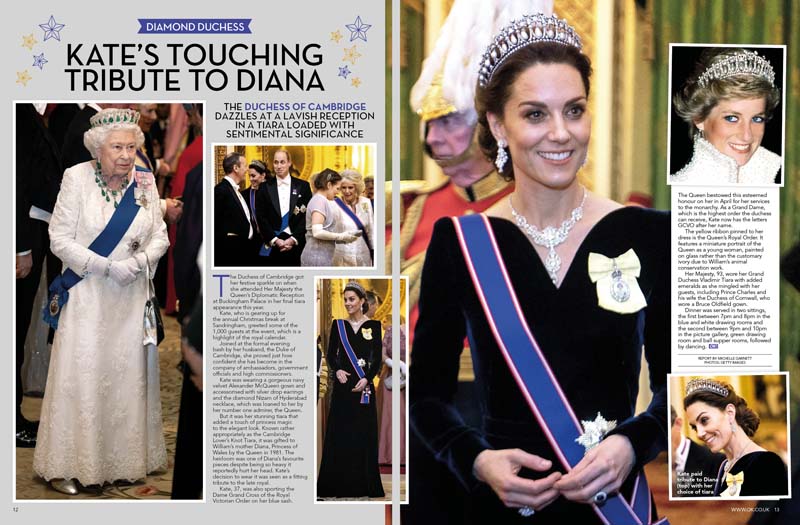 While attending a reception at Buckingham Palace, the Duchess of Cambridge wore a sparkling tiara that once belonged to her late mother-in-law, the Princess of Wales. Here’s my report on the story

The Duchess of Cambridge got her festive sparkle on when she attended Her Majesty the Queen’s Diplomatic Reception at Buckingham Palace in her final tiara appearance this year.

Kate, who is gearing up for the annual Christmas break at Sandringham, greeted some of the 1,000 guests at the event, which is a highlight of the royal calendar.

Joined at the formal evening bash by her husband, the Duke of Cambridge, she proved just how confident she has become in the company of ambassadors, government officials and high commissioners.

Kate was wearing a gorgeous navy velvet Alexander McQueen gown and accessorised with silver drop earrings and the diamond Nizam of Hyderabad necklace, which was loaned to her by her number one admirer, the Queen.

But it was her stunning tiara that added a touch of princess magic to the elegant look. Known rather appropriately as the Cambridge Lover’s Knot Tiara, it was gifted to William’s mother Diana, Princess of Wales by the Queen in 1981. The heirloom was one of Diana’s favourite pieces despite being so heavy it reportedly hurt her head. Kate’s decision to wear it was seen as a fitting tribute to the late royal.

Kate, 37, was also sporting the Dame Grand Cross of the Royal Victorian Order on her blue sash. The Queen bestowed this esteemed honour on her in April for her services to the monarchy. As a Grand Dame, which is the highest order the duchess can receive, Kate now has the letters GCVO after her name.

The yellow ribbon pinned to her dress is the Queen’s Royal Order. It features a miniature portrait of the Queen as a young woman, painted on glass rather than the customary ivory due to William’s animal conservation work.

Her Majesty, 93, wore her Grand Duchess Vladimir Tiara with added emeralds as she mingled with her guests, including Prince Charles and his wife the Duchess of Cornwall, who wore a Bruce Oldfield gown.