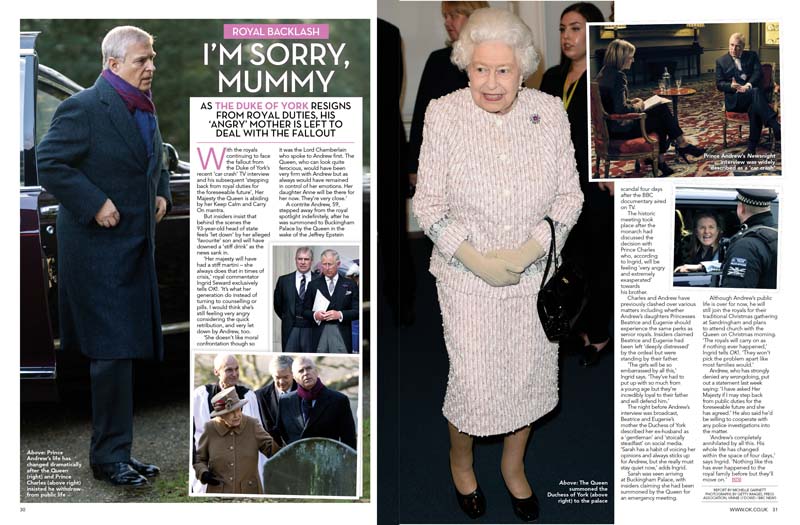 A stiff drink for Her Majesty but business as usual? What really happened behind the scenes when the Duke of York resigned from his royal duties following the Jeffrey Epstein scandal? I spoke to royal commentator Ingrid Seward to find out…

With the royals continuing to face the fallout from the Duke of York’s recent ‘car crash’ TV interview and his subsequent ‘stepping back from royal duties for the foreseeable future’, Her Majesty the Queen is abiding by her Keep Calm and Carry On mantra. But insiders insist that behind the scenes the 93-year-old head of state feels ‘let down’ by her alleged ‘favourite’ son and will have downed a ‘stiff drink’ as the news sank in.

‘Her majesty will have had a stiff martini – she always does that in times of crisis,’ royal commentator Ingrid Seward exclusively tells OK!. ‘It’s what her generation do instead of turning to counselling or pills. I would think she’s still feeling very angry considering the quick retribution, and very let down by Andrew, too.

‘She doesn’t like moral confrontation though so it was the Lord Chamberlain who spoke to Andrew first. The Queen, who can look quite ferocious, would have been very firm with Andrew but as always would have remained in control of her emotions. Her daughter Anne will be there for her now. They’re very close.’

A contrite Andrew, 59, stepped away from the royal spotlight indefinitely, after he was summoned to Buckingham Palace by the Queen in the wake of the Jeffrey Epstein scandal four days after the BBC documentary aired on TV.

The historic meeting took place after the monarch had discussed the decision with Prince Charles who, according to Ingrid, will be feeling ‘very angry and extremely exasperated’ towards his brother.

Charles and Andrew have previously clashed over various matters including whether Andrew’s daughters Princesses Beatrice and Eugenie should experience the same perks as senior royals. Insiders claimed Beatrice and Eugenie had been left ‘deeply distressed’ by the ordeal but were standing by their father.

‘The girls will be so embarrassed by all this,’ Ingrid says. ‘They’ve had to put up with so much from a young age but they’re incredibly loyal to their father and will defend him.’

The night before Andrew’s interview was broadcast, Beatrice and Eugenie’s mother the Duchess of York described her ex-husband as a ‘gentleman’ and ‘stoically steadfast’ on social media.

‘Sarah has a habit of voicing her opinions and always sticks up for Andrew, but she really must stay quiet now,’ adds Ingrid.

Sarah was seen arriving at Buckingham Palace, with insiders claiming she had been summoned by the Queen for an emergency meeting. Although Andrew’s public life is over for now, he will still join the royals for their traditional Christmas gathering at Sandringham and plans to attend church with the Queen on Christmas morning.

‘The royals will carry on as if nothing ever happened,’ Ingrid tells OK!. ‘They won’t pick the problem apart like most families would.’

Andrew, who has strongly denied any wrongdoing, put out a statement last week saying: ‘I have asked Her Majesty if I may step back from public duties for the foreseeable future and she has agreed.’ He also said he’d be willing to cooperate with any police investigations into the matter.

‘Andrew’s completely annihilated by all this. His whole life has changed within the space of four days,’ says Ingrid. ‘Nothing like this has ever happened to the royal family before but they’ll move on.’