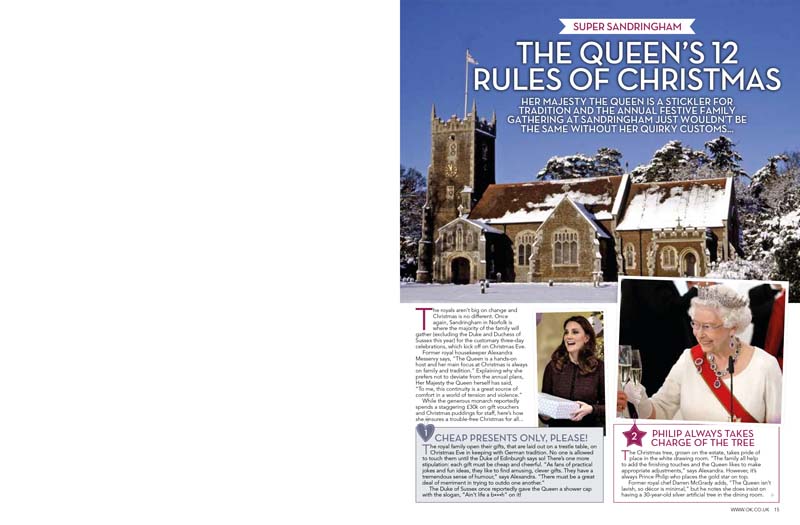 The royal family are renowned for upholding traditions and observing strict protocol and it’s no different at Christmas time. This feature takes a fun look at 12 of the time-honoured and sometimes quirky customs the Queen and co. follow during their annual gathering at Sandringham 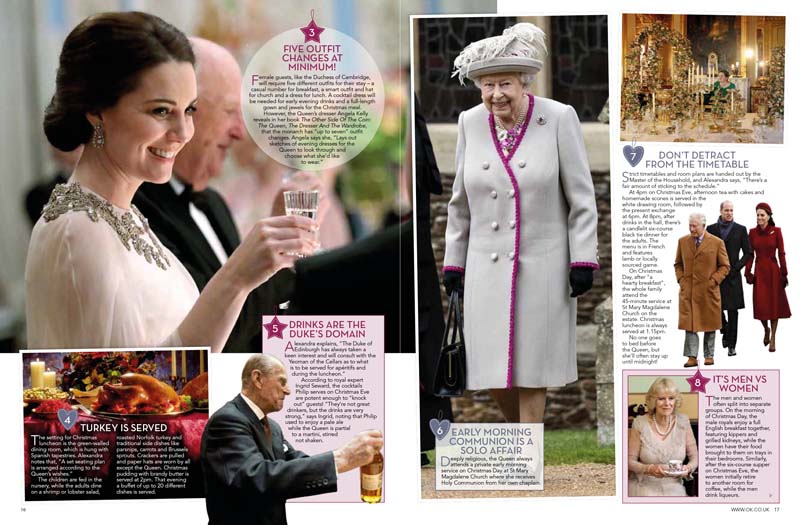 The royals aren’t big on change and Christmas is no different. Once again, Sandringham in Norfolk is where the majority of the family will gather (excluding the Duke and Duchess of Sussex this year) for the customary three-day celebrations, which kick off on Christmas Eve.

Former royal housekeeper Alexandra Messervy says, “The Queen is a hands-on host and her main focus at Christmas is always on family and tradition.” Explaining why she prefers not to deviate from the annual plans, Her Majesty the Queen herself has said, “To me, this continuity is a great source of comfort in a world of tension and violence.”

While the generous monarch reportedly spends a staggering £30k on gift vouchers and Christmas puddings for staff, here’s how she ensures a trouble-free Christmas for all…

The royal family open their gifts, that are laid out on a trestle table, on Christmas Eve in keeping with German tradition. No one is allowed to touch them until the Duke of Edinburgh says so! There’s one more stipulation: each gift must be cheap and cheerful. “As fans of practical jokes and fun ideas, they like to find amusing, clever gifts. They have a tremendous sense of humour,” says Alexandra. “There must be a great deal of merriment in trying to outdo one another.”

The Duke of Sussex once reportedly gave the Queen a shower cap with the slogan, “Ain’t life a b***h” on it!

The Christmas tree, grown on the estate, takes pride of place in the white drawing room. “The family all help to add the finishing touches and the Queen likes to make appropriate adjustments,” says Alexandra. However, it’s always Prince Philip who places the gold star on top.

Former royal chef Darren McGrady adds, “The Queen isn’t lavish, so décor is minimal,” but he notes she does insist on having a 30-year-old silver artificial tree in the dining room.

Female guests, like the Duchess of Cambridge, will require five different outfits for their stay – a casual number for breakfast, a smart outfit and hat for church and a dress for lunch. A cocktail dress will be needed for early evening drinks and a full-length gown and jewels for the Christmas meal.

However, the Queen’s dresser Angela Kelly reveals in her book The Other Side Of The Coin: The Queen, The Dresser And The Wardrobe, that the monarch has “up to seven” outfit changes. Angela says she, “Lays out sketches of evening dresses for the Queen to look through and choose what she’d like to wear.”

The setting for Christmas luncheon is the green-walled dining room, which is hung with Spanish tapestries. Alexandra notes that, “A set seating plan is arranged according to the Queen’s wishes.”

The children are fed in the nursery, while the adults dine on a shrimp or lobster salad, roasted Norfolk turkey and traditional side dishes like parsnips, carrots and Brussels sprouts. Crackers are pulled and paper hats are worn by all except the Queen. Christmas pudding with brandy butter is served at 2pm. That evening a buffet of up to 20 different dishes is served.

#5  DRINKS ARE THE DUKE’S DOMAIN

Alexandra explains, “The Duke of Edinburgh has always taken a keen interest and will consult with the Yeoman of the Cellars as to what is to be served for apéritifs and during the luncheon.”

According to royal expert Ingrid Seward, the cocktails Philip serves on Christmas Eve are potent enough to “knock out” guests! “They’re not great drinkers, but the drinks are very strong,” says Ingrid, noting that Philip used to enjoy a pale ale while the Queen is partial to a martini, stirred not shaken.

Deeply religious, the Queen always attends a private early morning service on Christmas Day at St Mary Magdalene Church where she receives Holy Communion from her own chaplain.

#7  DON’T DETRACT FROM THE TIMETABLE

Strict timetables and room plans are handed out by the Master of the Household, and Alexandra says, “There’s a fair amount of sticking to the schedule.”

At 4pm on Christmas Eve, afternoon tea with cakes and homemade scones is served in the white drawing room, followed by the present exchange at 6pm. At 8pm, after drinks in the hall, there’s a candlelit six-course black tie dinner for the adults. The menu is in French and features lamb or locally sourced game.

On Christmas Day, after “a hearty breakfast”, the whole family attend the 45-minute service at St Mary Magdalene Church on the estate. Christmas luncheon is always served at 1.15pm. No one goes to bed before the Queen, but she’ll often stay up until midnight!

The men and women often split into separate groups. On the morning of Christmas Day, the male royals enjoy a full English breakfast together, featuring kippers and grilled kidneys, while the women have their food brought to them on trays in their bedrooms. Similarly, after the six-course supper on Christmas Eve, the women initially retire to another room for coffee, while the men drink liqueurs.

#9  ONE’S CHRISTMAS MESSAGE IS REQUIRED VIEWING – FOR SOME

Luncheon absolutely must be wrapped up in time for the family to watch the Queen’s Christmas message at 3pm on the flat-screen Samsung TV in the Jacobean-style sitting room. Apparently, the 93-year-old hates watching herself so much that she goes into a separate room! Afterwards, Prince Philip raises a whisky toast.

Darren reveals, “The Queen is a major chocoholic, particularly dark chocolate. She always has a chocolate treat on Christmas. She also loves mint.” He adds that she prefers to save her chocolate treat for the evening of Christmas Day.

#11 COMPETITIVE PLAY IS THE ORDER OF THE DAY

Party games are big in the royal household and the family are seriously competitive, with Monopoly banned because it “gets too vicious” according to an insider.

After Christmas luncheon, they play charades, says Alexandra, and the Queen is said to be a great mimic! With the vibe surprisingly relaxed, she adds that the royals settle down to watch TV together, revealing, “There’s always a selection of films and when I was in the royal household, there was great excitement to see the latest release.”

The family still take part in the traditional Boxing Day pheasant shoot, according to Alexandra. Organised by Philip, it takes place after a kedgeree breakfast and the Queen likes to pick up the birds.

While guests often depart after the shoot, the royal couple stay on until 6 February, the anniversary of her accession and the decorations stay put until then.